Now that summer has arrived in the Rockies, it’s time to start thinking about how you’re going to cool your home. Your traditional air conditioning unit works well, but it also uses a ton of energy and isn’t great for the environment.

So we’re here to answer your questions.

How does evaporative cooling work?

The idea is simple: hot air moves through the cooler and evaporates water from a honeycomb of absorbent material. That decreases the temperature of the air, which is then pushed out into your home with a fan. The cooler air drops the temperature in your house.

If you’ve ever set up a bucket of ice in front of a fan on a really hot day, you’ve used a similar principle. But modern evaporative air coolers are much more advanced.

It’s also worth noting that this method of cooling increases the humidity in the air, which is great during dry Rocky Mountain summers. If you currently use a humidifier and your A/C, you could just run a single device to take care of both—and save a lot of money.

How well do evaporative coolers work?

The effectiveness of evaporative cooling depends largely on the conditions of your home. The drier the air, the better the cooler will work. It also works best in a specific range of temperature and humidity combinations.

The highlighted squares are the optimum conditions for evaporative cooling.

As you can see, an evaporative cooler can make a significant difference when it’s really hot. That being said, you’re unlikley to get your house down to 70° on a 100° day without central A/C. For reference, here’s Honeywell’s guide to average humidity in July: 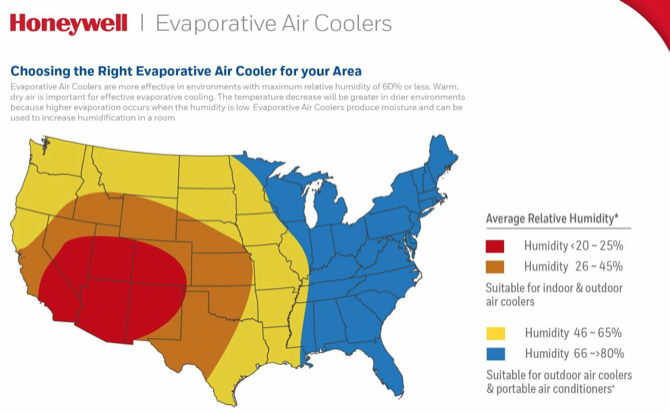 Most of Colorado and Utah are in the driest part of the country, with the northeastern and northwestern corners moving up a level. Just about anywhere in the Rockies (with the exception of Western Montana) is a good place for an evaporative cooler.

How much energy do evaporative coolers use?

The Department of Energy says that evaporative coolers use about a fourth as much energy as traditional A/C units. Non-portable units also cost about half as much to install.

Of course, you’ll make a tradeoff for cooling effectiveness, especially in places that aren’t as dry as much of the Rockies.

Still, the amount of energy that you save is a big plus.

And there are other environmental factors, too. Air conditioners contain HCFCs, gases that are known to damage the ozone layer. Evaporative coolers just use water, making them much more environmentally friendly.

A/C units are phasing out the use of harmful chemicals, but you’ll still see freon and other dangerous gases in use for many years to come.

Should I use a whole-house or portable evaporative cooler?

When you start shopping for an evaporative cooling system, you’ll see that you have many different options. Whole-house coolers usually mount on the roof of your house and blow air down into it. 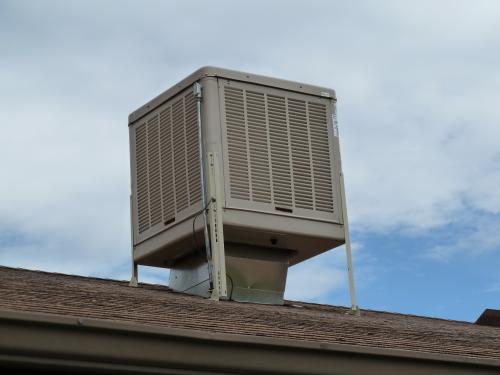 Wall units, like window air conditioners, mount in a window or wall. And portable units come on casters that let you move them around.

Installing a roof-mounted system is likely to be expensive, and a window cooler doesn’t give you as much versatility as a portable unit. If you’re considering making the switch from traditional A/C, you may want to try a portable unit for a while to see how well it works.

Honeywell’s CO60PM is a great choice; it works both indoors and out, and comes on wheels so you can move it around easily. 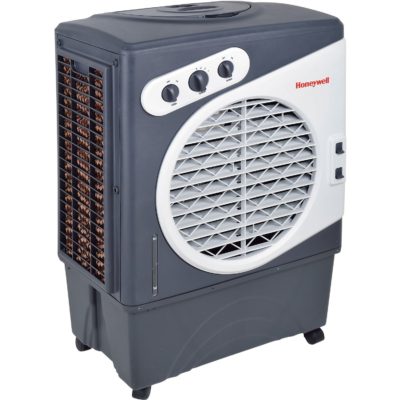 And with 60 liters of water storage, you don’t need to leave it connected to your water supply to get several hours of cooling. Its weather-resistant exterior is a bonus; you can use it outside to shoot cold air up to 12 yards outside, too.

What should I look for in a portable evaporative cooler?

Like air conditioners, there are lots of different features that you can look for in evaporative coolers (even the simpler portable ones).

Here are a few things to consider:

Airflow. This is usually measured in cubic feet per minute (CFM). The Honeywell moves 1540 CFM, which is a solid amount of airflow. Larger units will move more air, but they’ll also use more power.

Water supply connection. Simple evaporative coolers will need to be refilled—which can take a while, even with a powerful garden hose. Nicer units will hook directly into your water supply do you don’t need to worry about dumping buckets of water and ice in when they run dry.

Blade size. The evaporative cooler’s fan is a crucial component, as it moves air through the unit. The Honeywell’s 16-inch fan is a good size that moves a lot of air without taking up a ton of room.

Cooling area. Many units will tell you how many square feet they can effectively cool. If a unit can’t cover your whole house, you may want to consider buying a larger one or a second unit (though these will necessarily use more energy). The CO60PM can cool up to 850 square feet, which will cover a solid portion of your house.

There are a lot of other features you can look for, like weather resistance, easy-to-use controls, and advanced air intakes (all of which the Honeywell provides), but if you pay attention to these four, you’ll be able to pick the right cooler for you.

Should I buy an evaporative cooler?

In the end, it will likely come down to how cool you want your house when the Rocky Mountain summers start edging 100°. It may also depend on where in the Rockies you live. Durango, for example, is drier than Fort Collins.

If you’re looking for an affordable, environmentally friendly choice, an evaporative cooler is a great way to go. And a portable unit like the Honeywell CO60PM is a perfect unit for anyone still on the fence. At $320 (available on Amazon), it won’t break the bank—and it’ll save on your energy bill, too.

Be the first to comment on "All of Your Questions About Evaporative Cooling, Answered"