This summer, it seemed like the world was burning.  Again.  Nature is dealing out so many disaster movies around the world these days, it’s no wonder post-apocalyptic books and movies are so popular.  In the US West there have been more frequent, larger, and longer-lasting fires in recent years than ever in modern times.  And the fire season itself has grown, just as the seasons themselves are changing, with earlier springs and later winters.  And hotter summers.  Even though the winter of 2016-17 was very wet, the summer of 2017 was so hot and dry it didn’t matter – the trees, the soil and the air dried out so much that that was one of the most intense and destructive fire seasons on record, with some 200 large fires and over 10 million acres burned.   Our northern neighbor too – Canada – saw the acreage of forest fires double as compared to the 1970’s.

Of course, this is occurring against a backdrop of generally rising global temperatures.   Indeed, 17 of the 18 hottest years ever measured have occurred in the past 18 years  Scientists have found there is a direct, iron linkage between these rising temperatures, general dryness (if not drought), and more severe fires.  If this sound like climate change is behind this, it does to most scientists too.  And comedians – on his late night show, Jimmy Kimmel said, “You know how you know climate change is real?  When the hottest year on record is whatever year it currently is!” 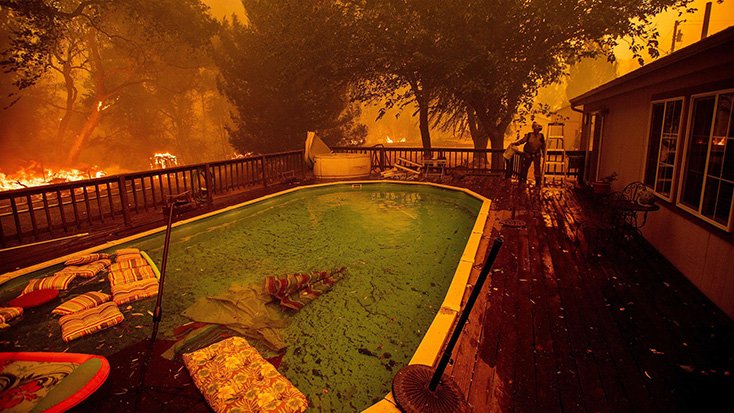 In California, the now-largest wildfire in the state’s history, the Mendocino Complex Fire burned more than 450,000 acres, topping last year’s Thomas Fire.  Of the 20 largest wildfires in California history, 16 have occurred since 2000. And these fires are more destructive than ever too.  With more people and structures occurring within and close to wildlands (‘the urban-wildlands interface’), more structures are being destroyed and people killed.  And the thick, smoky air can kill too – even long after the fires are out.  Smoke particles can spread far and penetrate deep into the lungs, causing wheezing, sore throats, heart and lung diseases and even death.

Yet despite this increase in fire frequency and size, only an estimated 10% of US Western forests have burned since the mid-1980’s, when climate change effects are now considered to have begun and forest fires markedly jumped in size and number.  That means there’s still a lot left unburned, and a whole lot of excess fuels left out there.  And all that danger.

But this problem is not natural – not only are the fires made worse by climate change, which has hit Colorado especially hard but perhaps more so by fire suppression:  It has been decades in the making.  Since the early 20th-century well-intentioned state and federal agencies began aggressively fighting forest fires, containing and extinguishing them as quickly as possible.  A fire was unquestionably bad to this Euro-American mindset.

Yet it was not always this way.  Not only are many ecosystems either fire-adapted or fire-dependent (or both), but fire suppression became federal policy just as Native Americans were rounded up off the land and into reservations.  It was realized even back then that Native Americans used fire regularly, but most Euro-Americans thought it was a bad practice – a 1918 US Forest Service ranger’s memo declared that “renegade Indian” fires were “pure cussedness.” 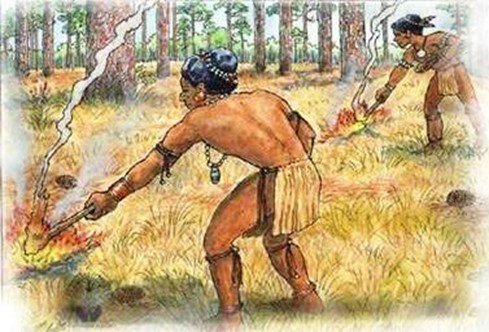 We now realize that Native Americans across the continent used fire extensively over thousands of years to manage the landscape for their benefit – to attract game to the new plant growth areas; to drive game for hunting; for range management; to open areas and improve farm soils with recycled nutrients; to control pests; to enhance the growth of wild food plants or basket-making materials; to maintain travel routes; to fire-proof their settlements; and more.  Some Plains tribes even called their fires the ‘red buffalo.’

These fires though were of a different nature than today’s.  As they were set fairly frequently, they were typically of much lower-intensity, and were close to the ground and not up in the treetops (‘ground’ not ‘crown’ fires).  And they were not set at the hottest, driest times of the year.

The extent to which the continent’s landscapes were impacted by Native-set fires is not completely understood or agreed upon, but is considered to have been widespread and significant.  In some areas in both the East and West, fires tipped ecosystems from forest to grasslands or savannas (like the southeast pine and Mid-west and Western oak savannas) and in other forested areas, they kept the understory fuels and small tree density down, which opened the forests and prevented fires from climbing up into the crowns.  Native-set fires are considered more important than lightning-caused fires in shaping western forest ecosystem structures.  There goes the myth of the “pristine” landscape – the American landscape was broadly shaped by its native inhabitants! 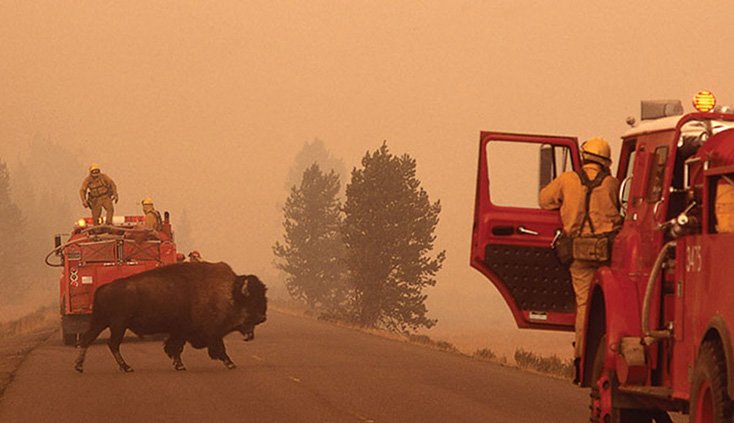 And so now, traditional native fire practices are now being studied more carefully and respectfully, by academics and agency practitioners alike.  Native practices are now thought to be partly – even largely – responsible for the great abundance of wildlife that was universally recognized by early explorers and settlers.  Native Americans did not domesticate as many animals as Europeans, but they domesticated a lot of plants and practiced wild game management more extensively.  Traditional knowledge systems integrate tribal beliefs, philosophies and practices, and thus include a cultural and psychological, even ceremonial, dimension that make it different from, broader than western scientific approaches.   There is keen interest among researchers and tribes too, from coast to coast, the California redwoods to Virginia to Canada to Montana and throughout the West.  The US Forest Service is now meeting with tribes and even hiring them to help them perform prescribed burning.  In far northern California, the Karuk tribe has been hired to help prepare for and undertake a prescribed burn along the Klamath River.  In Montana, there have been a series of meetings for the Native American tribes there to teach Forest Service personnel about the traditional practices.   Other tribes across the country are taking notice and hoping for similar partnerships in their regions.   This exciting new development indicates a new chapter in US land management, and is part of a growing positive relationship between US and native cultures.  And while it won’t solve the climate crisis, it may prove an important part of solving our megafire problem.

Be the first to comment on "Mega-Fires in the West"