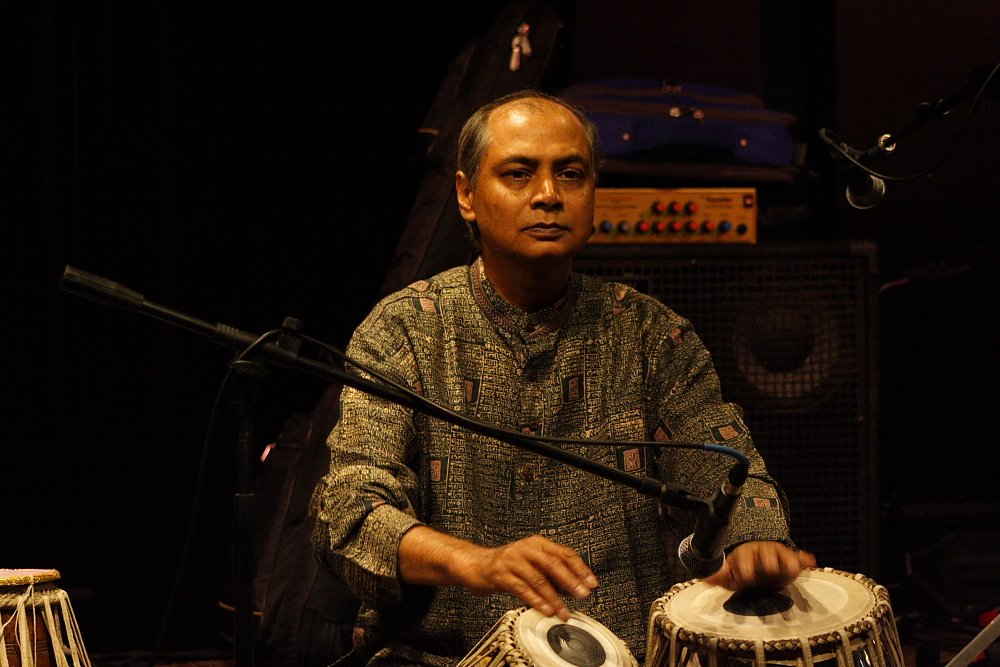 DENVER, CO – Aloke Dutta returned to Colorado for an out of this world concert at the Dazzle Jazz Restaurant and Lounge. One of the premiere tabla players in the world hailing from Bengali, India. Aloke was trained by his father Anadinath Dutta who was a professor of percussion at the Viswa Bharati University in Shantiniketan.

Arriving at the Dazzle Jazz Restaurant and Lounge I was surprised to see Aloke sitting in the front row, almost every person in attendance seemed to know him by name. Many hugs and hand shakes later he quietly took the stage, sitting Indian style in front of two tabla drums. The crowd was incredibly diverse ranging from hippies to yuppies and Denverties all mixing together in a quite lounge setting. There was even a sign on the table that read “As a courtesy to the musicians and other patrons, please keep conversations to a minimum during the performance”. I wish more live music venues would take the Dazzle Jazz approach, as there is nothing worse then someone yapping while your trying to listen to music.

Aloke has become a popular figure in modern music, having taught some of the most influential drummers of the 20th century. He is extremely selective with the students he teaches, some of his past students include: Danny Carey from band Tool, Terry Bozzio who played drums for Frank Zappa, Roy Wooten from Bela Fleck, Pat Mastelotto, Joe Porcaro, Simon Phillips, and Aaron Harris. 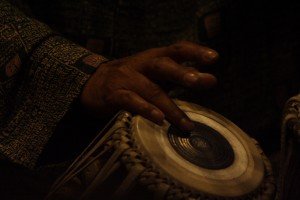 Aloke thanked the crowd right off the bat, “thank you, your wonderful music lovers, its makes a big difference in our lives we always look forward to coming back to Denver”. He then told the crowd the first song was his gratitude toward us for coming. With that he was off in his own world playing the tabla, numerous times during the first song I fell into a trance, fixated on how fast his fingers were moving and the sounds that were being vibrated off the drums. After the first song he told the crowd a little about his background ” I grew up in India, in a poetic environment. I didn’t become a poet but there is a scene of poetry in music, the meter of the poetry and music are fascinating”.

The second song of the night as Aloke described had two long stressed syllables, a slow tempo of seven with a primary mood of Devotional, if any of our readers know what he’s talking please let us know, I am very intrigued. The lounge was quite outside of Aloke’s drum beats, at times when people would talk, or chime their glass at the wrong time he would shoot them a look without missing a beat. Aloke was communication with his eyes and the drums, for a second it felt like he was inside my mind seeing what was going on, heavy stuff..

Aloke joked with the crowd that he has been loosing his hair for the last ten years, ” I used to have beautiful long black hair, you can tell I’m not to worried about loosing that”. Then he told a story about his morning walks, and how exited he is when he finds pennies on the ground, the earlier he goes the more change he finds. At the end of the month he has enough changed saved to buy two .99 center hamburgers.

The quotes for Aloke thruout the night were great including, “In our lives we try and go straight forward with no complications, which never happens things always go wrong, but with strength and power we can deal with the pleasant and unpleasant situations”. He then told the crowd “I was told alcohol makes my music sound better.”

In Bengali, India Aloke talked about the monsoon seasons with heavy rain, the amazing range of wildlife at home including Bengali Tigers, Cobras and firefly’s. As a kid Aloke said he was always fascinated by firefly’s, he would sit on the porch and watch them dance with there blinks creating natural rhythm’s.

Aloke’s last song was timed with the finishing of his tea onstage, “I have finished my tea this will be my last song.” Words cant explain what I heard tonight, as I have never heard any sounds like this before. The best way I could describe it would be, a must see.. 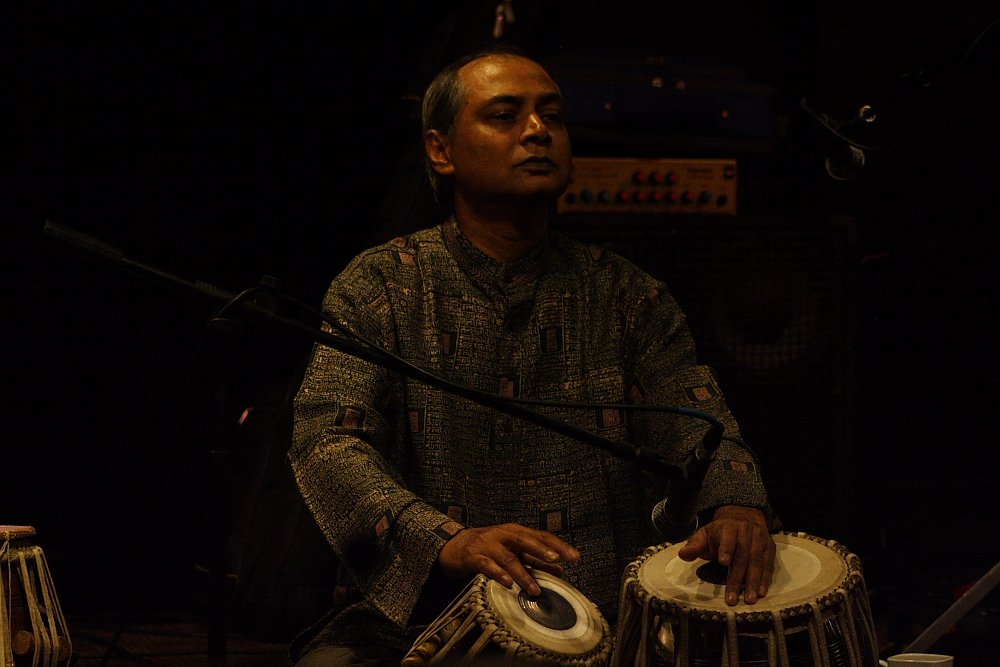 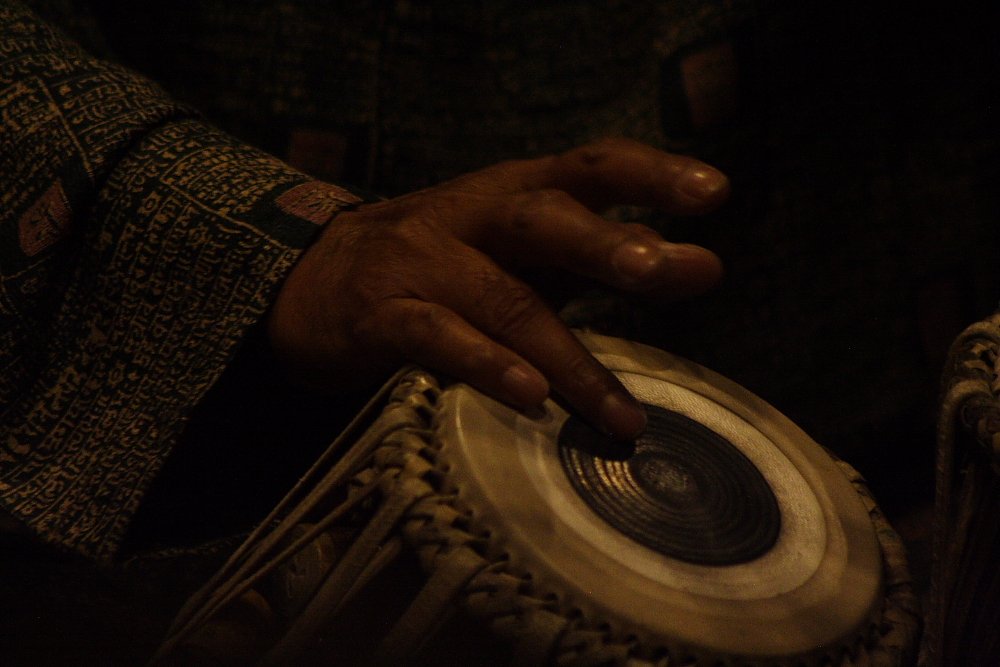 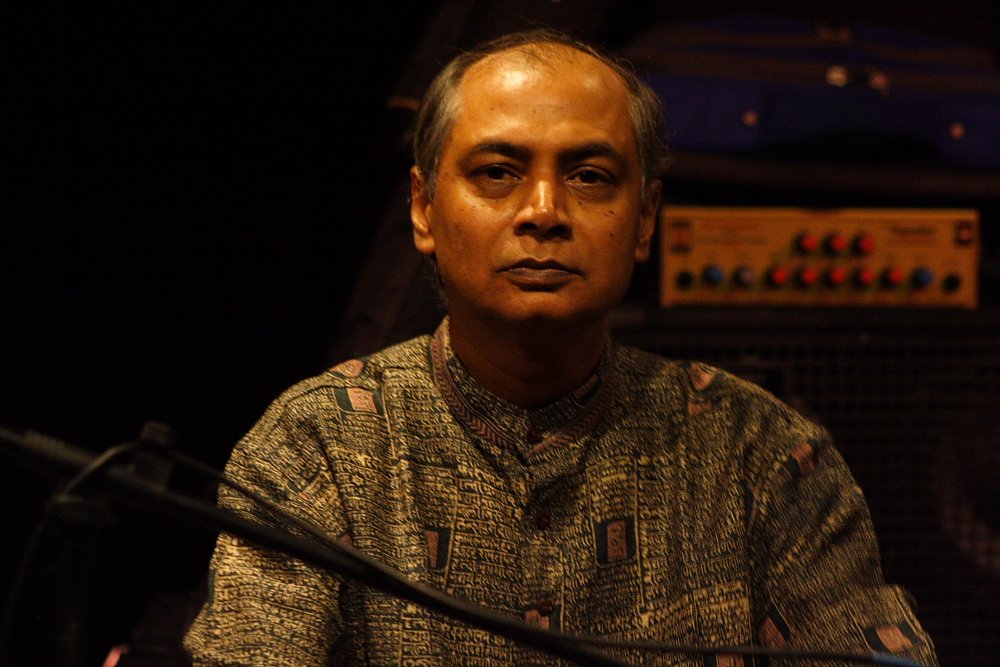 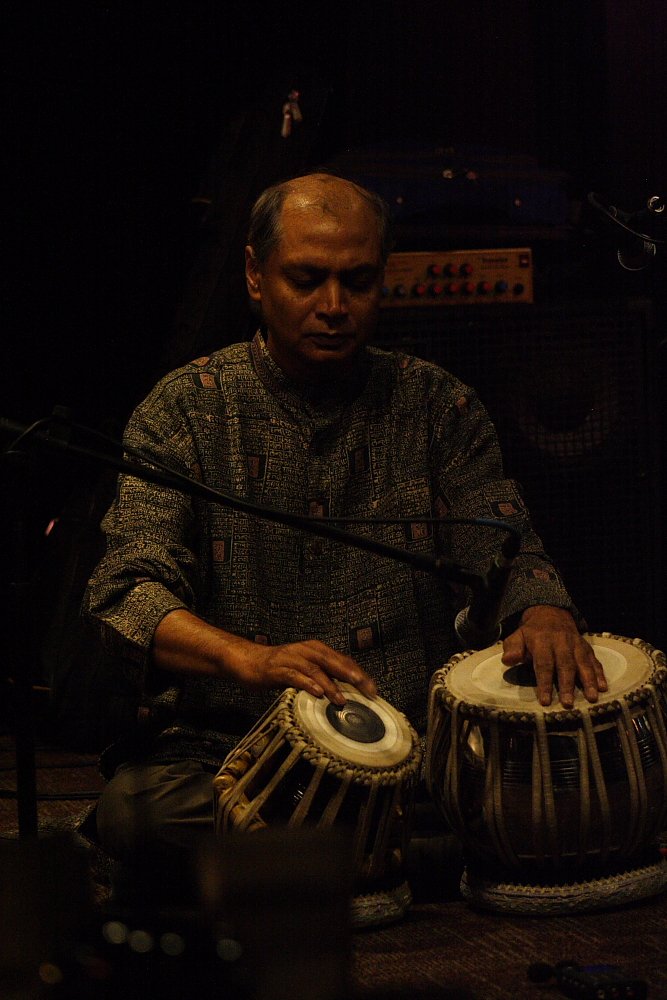 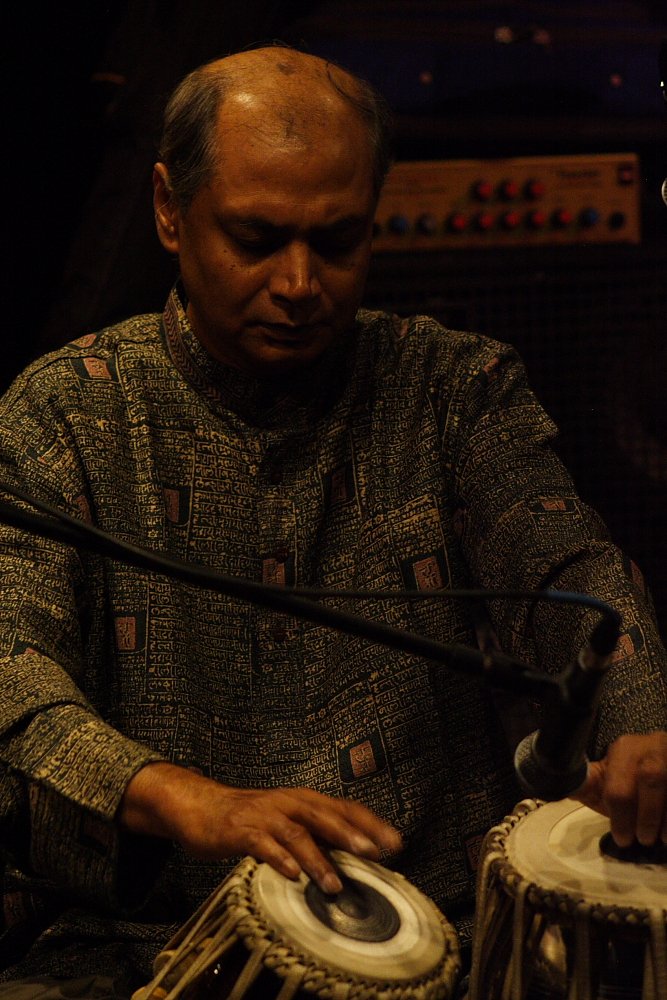 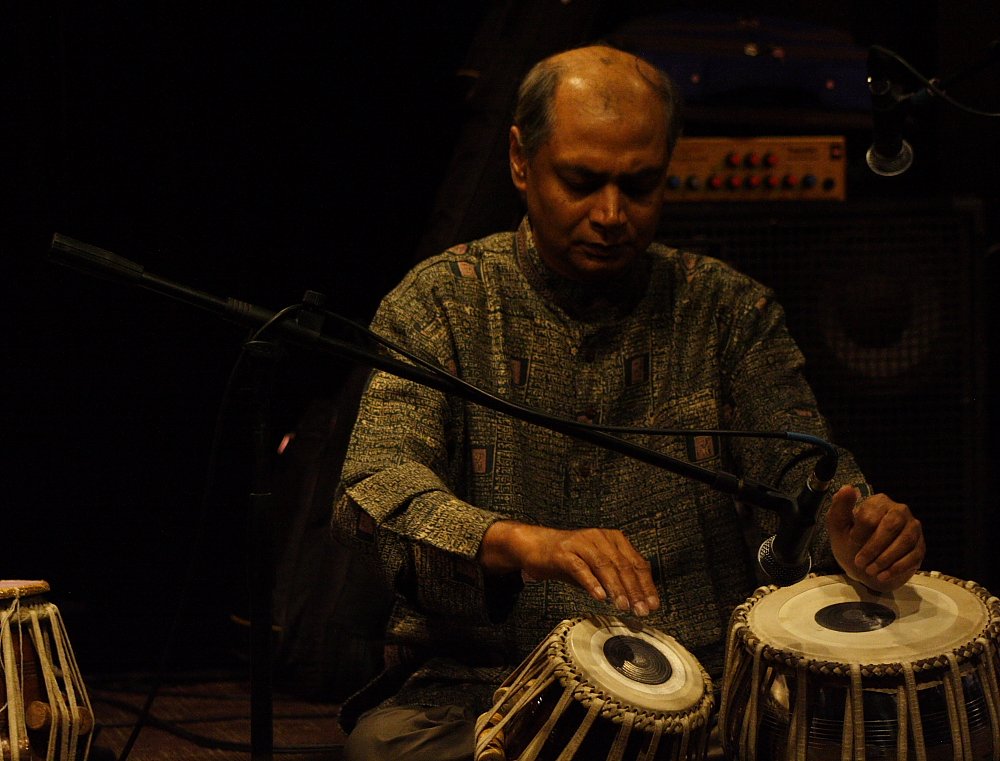 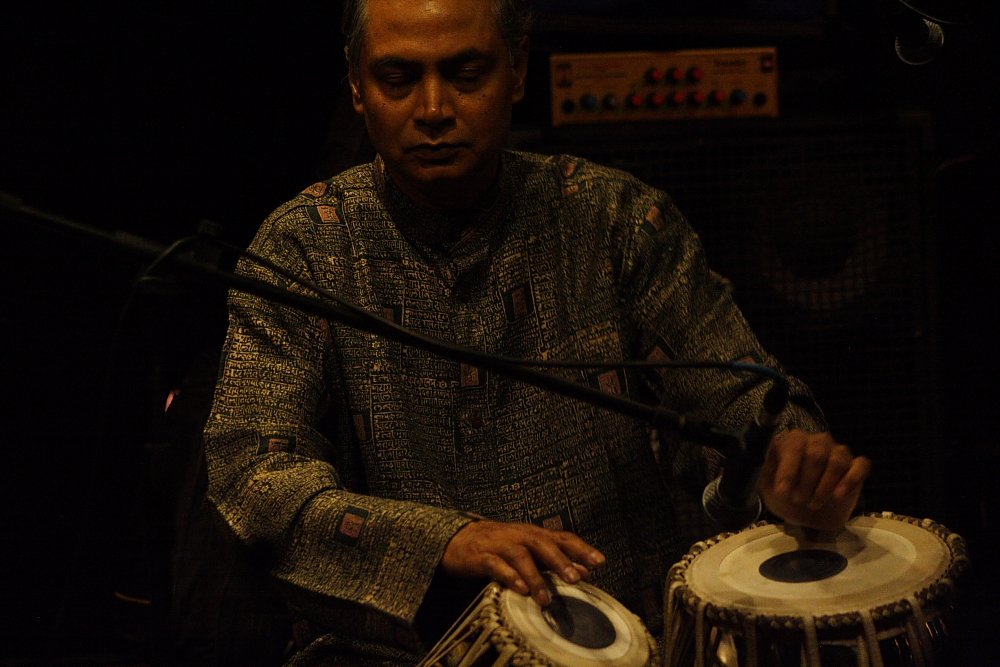