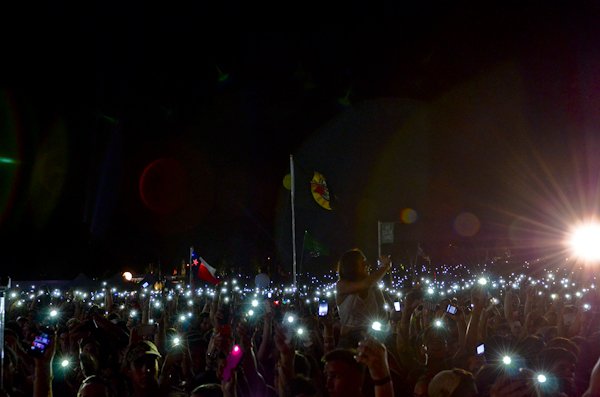 AUSTIN, TX – Everything seems so quiet. All the noises are pleasantly muffled. It feels as though I’m moving with the crowd on a flat escalator away from the stage, and my body is light as a feather. This is the feeling after a successful day at the Austin City Limits music festival.

It was a never-ending battle between us, the audience members and the weather. There was the occasional collective sigh whenever a lone cloud blocked the sun for a moment. People were using the 6 x 6 cardboard fans that were given out as shields against that fire in the sky. By the end of Saturday, we had the upper hand. But in the end, the weather defeated us with a never-ending downpour that cancelled Sunday’s music. 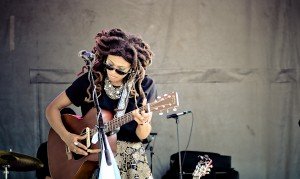 I have to admit, I wasn’t that bummed about the cancellation. I already got to see the two acts that I was most pumped about, Valerie June and Grimes. Miss June was every bit as lovely as expected. Her curled up dreadlocks, southern cadence, and nonchalant demeanor made it impossible not to be glued to her every move. Her performance was as impressive as her style itself. But the thing that caught me most by surprise was seeing her set up before the show. The sound techs were having a hell of a time getting things tuned in to her liking. It was so amusing to see how she was not at all ashamed to show her shear disgust in front of the awaiting audience. She is a true diva.

But as soon as everything was dialed in, it was on. It was like she was able to let go of that frustration instantly and dive right into an amazing set.

It was interesting to see how Grimes handled similar issues during her show. Though her mic wasn’t working for the first five minutes or so, she had this “oh well, they’ll figure it out” kind of attitude. She rocked the d.j. station, occasionally singing into a dead microphone in front of an immensely large crowd.

Checkout our favorite music festivals of the summer. 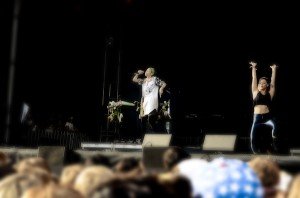 I was blown away to see that Grimes was a solo act. There is so much going on with her songs that I assumed there had to be several members of the group. The stage consisted of one skinny, pale young girl and a couple of older female dancers. I daydreamed about the rise to the top of this pale girl working on her music all night every night by herself with no goals to make it big, simply making music for the fun of it. On the stage, in front of the ACL crowd, she was having so much damn fun and was clearly down to share her enjoyment with the audience. Although it was an incredible performance, it’s not quite accurate to classify it as a performance. It was really more of an event with one spark plug of a girl bouncing around with fire and bliss, showing her brilliance with the care-free manner of a child.

There were many great performances from ACL and also many unfortunate bands that didn’t get an opportunity to hit the stage, but in my eyes, the audience certainly got everything they came to Austin for.  I know I did.

Festival Preview coverage below:
AUSTIN, TX – I can’t lie, I wasn’t thrilled when I came to the conclusion that Texas would be the next place I’d be moving. But after the dust settled, I realized it wasn’t so bad here. And it gives me a chance to visit Austin.

So that’s what I’m doing. I’m off to explore the town and its music scene. What better time than during the Austin City Limits music festival? From what I gather, this festival is right up my alley. It contains some of Austin’s local cuisine, a craft beer garden, an art walk, and even has a music stage for kids. I don’t actually have kids, but I love this none the less. Can you imagine how cool these kids will grow up to be after a childhood that exposes them to such excellent music and a crowd of fun-loving people. I fully endorse this method of parenting.

As for the music itself, I’m very excited to see some more well seasoned acts such as the Cure and Blind Boys of Alabama. When I initially looked at the lineup, I said to myself “yep, I’m getting older alright.” There were so many bands that I hadn’t even heard of. That’s where Spotify comes in handy. I have had the chance to peruse through a lot of new music in order to see which bands I want to cover.

The one who most impressed me was Valerie June. She’s got the whole southern country/folk/gospel thing going on that I love. But then she’ll bust out a bluesy side and it’s pretty damn incredible. I recommend looking her up. While you’re at it, check out Typhoon, MS MR, Divine Fits, Vintage Trouble, and Junip. I just discovered that Jose Gonzalez is in this band (Junip). His solo stuff is unreal so I can’t wait to experience this collaboration live.

Over the course of the weekend I will have the privilege of covering all aspects of the festival with story and images. Best job ever.