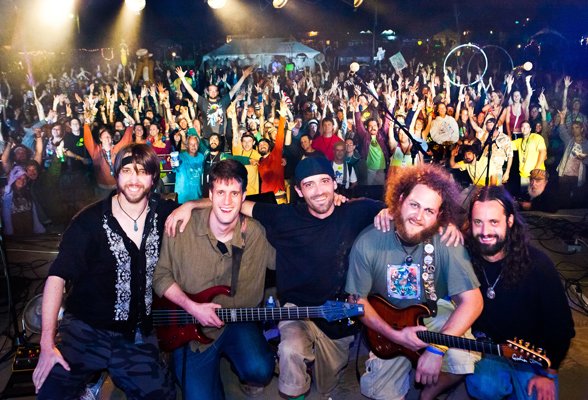 Recently I was fortunate enough to talk with Rob Chafin, drummer of The Werks, and their tour manager, Donald, about the future of The Werks. I say fortunate because this young, explosive band is in the midst of a hefty sized tour and is building momentum every day. I am grateful they could take the time from their hectic life on the road to share with me and Mountain Weekly News an insight into their life and love, The Werks.

MWN: Hi there, Rob. Did I catch you at a good moment to talk for a few?
Rob Chafin: Sure man, I can talk. Laughing. We’re at a Lowes parking lot right now in Kansas. Tour bus needed some attention.

MWN: Oh no, that sounds no good.
Rob Chafin: It’s nothing too serious. Just the standard wear and tear you would expect from a touring band. Changing the filters, checking the fluid levels, shit like that. Plus it needed cleaning out. Laughing. As you can imagine, the bus gets dirty, inside and out.

MWN: Yeah, I’ll take your word for it. How has the trip been so far?
Rob Chafin: Really good. We’ve gotten a good response/turnout at all of our shows so far and we’re really looking forward to hitting the Midwest since we’ve received a lot of love there in the past. Our fan base is really big there so we’re aiming to please. So far we’ve been hitting the target.

MWN: That’s great to hear. How did this tour kick off?
Rob Chafin: We went from playing a festival called Best Fest in Costa Rica to doing a string of shows along the East coast… The Werks have become an international band. Chuckles. But now we’re headed to Lawrence, KS to play a show at The Bottleneck tomorrow. We’re all stoked about that since it’s a pretty famous club. On a side note, I don’t want to speak for the whole band here. I’m by no means the spokes person.

MWN: I wouldn’t have assumed that. I’m just glad that I can help get The Werks’ message out. I’ll make it a point to say, “The Werks’ drummer” and not, “The Werks’ front-man or spokesman.”
Rob Chafin: Laughs. Good, good. Just say that I’m the drummer. Throw in vocalist too. Also, add Life-Changer and Dream-Fulfiller. Laughs more.

MWN: Is that all?
Rob Chafin: That’s it.

MWN: So what’s in store for The Werks after your current tour?
Rob Chafin: Well the tour is only about half way done. We still have a string of shows to do throughout Colorado after we play tomorrow’s show in Kansas. Plus when we get back to the East coast we have a few other shows to do before the tour is officially finished with. So we’re taking it one day at a time. Check out our website or our Facebook page to see what’s officially been announced.

MWN: No plans for a summer tour, a new CD, nothing?
Rob Chafin: Oh, no! Quite the contrary. There just is some stuff I probably can’t talk about yet since it hasn’t been officially announced. I can say for pretty sure that we will be heading back into the studio in May to begin recordings for our second official album. And we do have some summer festivals lined up that we’re going to play.

MWN: Does that mean we’re going to hear new songs on this tour?
Rob Chafin: We have a few new tunes that we’re excited to play once we hit Colorado. We have a large fan base there and love giving the fans a good show.

MWN: Very nice. And the summer festivals can you talk about them?
Rob Chafin: I can say that we are currently booked to play The Hangout, Wakarusa, Summer Camp, All Good, Sonic Bloom in Colorado, Camp Disco and we plan on ending the summer with our own music festival called The Werk Out. That will be in Legends Valley, OH, September 12-14. So we’re playing all the major festivals we truly enjoy.

MWN: Sounds awesome. Who do you plan on playing with at your festival?
Rob Chafin: Can’t say right now, but last year we had Lotus, Rusted Root, EOTO, Papadosio, Break Science and some other bands we are really tight with. We like to play with bands we’re friends with to get a community vibe on stage and in the crowd. That’s what we’re about… But hey, here is Donald our tour manager. I should let you talk with him.

MWN: That’s fine. I’m happy you got to share some time with us.
Rob Chafin: Hey no worries. Hope to see you soon at one of our shows!

Turns phone over to Donald,

MWN: Hi there. I’m calling to write up an interview about the band your managing.
D: That’s great, how can I help?

MWN: Well firstly, are you their tour manager, or a member of the band deemed, “Tour Manager?”
D: No, no. I am officially their Tour Manager, I don’t play any instruments.

MWN: So how is the tour going so far from a managers view point? Good, bad?
D: It’s going really well thus far. We’re filling the clubs and spreading good vibes along the way.

MWN: Glad to hear that. This band sounds busy, that must keep you on your toes.
D: They certainly are and certainly do. Every day we get more invitations to play more shows whether they’re at clubs or festivals. This band is filling its schedule quickly which is a good sign.

MWN: It certainly is. Well, I do appreciate your time and Rob’s for talking with me.
D: Hey they appreciate the exposure and your time as well. Try to find me at the show; I’ll be the guy with the radio running around like a mad man.