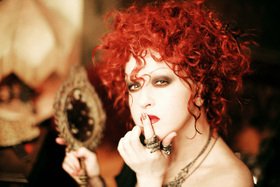 The Mountain Weekly News had the pleasure to spend some time with the amazing Cyndi Lauper, actress and singer who has sold over 30 million records worldwide as she strolled the streets in New Jersey looking for a bottle of olive oil for a friend. We talked eveything from her musical roots, to the True Colors fund and finally Cyndi wanting to intern for rapper 50 cent… Learn more in our Cyndi Lauper interview below:

Cindy, thank you for taking the time to talk to the Mountain Weekly News, we are very excited to have you returning to Colorado for your etown concert. Your new album “Memphis Blues” has been on the top of the Billboard Blues chart for the last 12 weeks!! Where did the inspiration come from to do a blue album?
CL: I started out singing in a band as lead singer, doing Janis (Joplin) covers, I really adored her. EDITORS NOTE: ~At this point I here some commotion thru the phone and then Cindy says to a fan I’m sorry, I can’t talk right now, I’m doing an interview, ~ our conversation gets back on course “I want to get my friend a bottle of olive oil, but I bought cookies who eats cookies these days (Laughing.. ) Is it to Italian of me to get olive oil? In the summer of ’87 I had a dream where Oscar Peterson was playing piano, I was like whats going on, I really liked it. I was jamming with him in my dream, he talked to me and said I should re-do the old songs in 87 like Joplin. In the 80’s it seemed like it was all keyboards and no pianos, I would try and sing covers but it wasn’t enough for me. She (Janis) had a wealth of material when she got her start. Then I started studying under Lennie Tristano in Queens, Lenny taught music, the basic foundation, center of rhythm, and how to have command of the count.

Tell us about the Cyndi Lauper Barbie Doll that was just released, growing up did you ever play with the dolls or imagine you would have your own Cyndi Lauper Barbie Doll one day?
CL: It’s a great honor, however when I was first playing with the dolls I cut off all the hair thinking it would grow back, I was shocked when I touched her hair and it was bald, a very traumatic experience with the balding it really shook me. I played with Barbie, but Ken was not nearly as cool at G.I. Joe.

You have had some really unique hair colors over the past, do you remember the first time you died your hair and what color it was?
CL: Yes!!! St Patrick’s Day in the 4th grade, I got some green food coloring and died my hair. It was really green for my mother, but it washed out in a day.

This season on NBC’s the Apprentice you were one of the main attractions, can you tell us about your experiences filming the show?
CL: The days were long filming took place from 4am-12am 6 days a week for as long as you are on the show. I did it for the True Colors Fund, to engage straight people about the civil rights of everyone. If you can single out anyone group of people we have problems.

That leads me to my next question, can you tell us about the True Colors Fund and your involvement in the program?
CL: The True Colors Fund Donates money received from our tours to advocacy organizations, we have done lots of meet and greets, lots of pictures with fans to raise appearance. We want to raise flags and created a center link between the human rights campaign. Lots of young gay and lesbian children are thrown out of there houses for coming out, as a parent I don’t see how anyone could ever do this! Your kid is part of your soul, they are “on loan to you” As a parent you need to help drive and survive your children its not about who you want them to be or they will be unhappy. Many homeless gay and lesbian youth face violence in homeless shelters. So the True Colors Residence was created, Colleen Jackson has been a driving force. She started a program where mothers with children could go to work while having there kids watched by older people in the community, creating a home and family unit, she is really cool!!

With over 30 million records sold worldwide is it ever hard to “get away?”
CL: No, people are pretty cool, I’m in New Jersey now trying to get some olive oil. Everyone’s nice.

Going back to 1985, you had a great solo in “We Are The World”, what was it like collaborating with all those musicians?
CL: I was the FREAKAZOIDE in the group, Bille Joel was nice, Bett ( Midler ) I absolutely love her. We were doing stuff that help the planet. If Everyone just did one thing to help….

Are there any musicians living or dead you wish you could jam with?
I think I might want to intern for 50 cent, my son met him and he’s pretty inspirational and actually a very sweet guy. Its sort of like Howard Stern, when you talk to him off the radio he is a totally different person.

Last but not least what do you think about the music scene in Colorado?
My cousin lives out in Colorado, I think they have great public radio. Its a great opportunity for musicians, pretty awesome. NY is not like it used to be for music, Colorado seems to be one of the hot spots.

Cyndi, Thank you so much for talking with us today, i felt like I was talking to one of my aunts. We look forward to your upcoming etown concert at the Paramount Theatre in Denver, CO. Good luck with the new Blue Album and well be rooting for you to win another Grammy Award later this year, thanks again this has been fun!!!

DENVER, CO – Cyndi Lauper Denver returned to the Paramount Theatre for a special eTown live radio taping with special guest Charlie Musselwhite, and Mohammed Alidu & the Bizung Family. The eTown radio show is broadcast from coast to coast on NPR, commercial, and local radio stations. Taking a throw back to the old-time radio variety shows, eTown host Nick and Helen Forster record every show live in front of a packed audience. Featuring conversation’s and performances from today’s top musical artists.

Cyndi Lauper who recently sat down with the Mountain Weekly News is on tour to support her new album “Memphis Blues” which has been #1 atop the Billboard Blues Chart for the last 13weeks!!!! Memphis Blues takes a swift 180 from Cyndi Lauper’s popular sounds of the 80’s and 90’s. Her current touring band has over 100+ years combined experience playing the Blues. Without any hesitation Cyndi stepped right into the middle of the band and took charge of the heavy blues tunes. 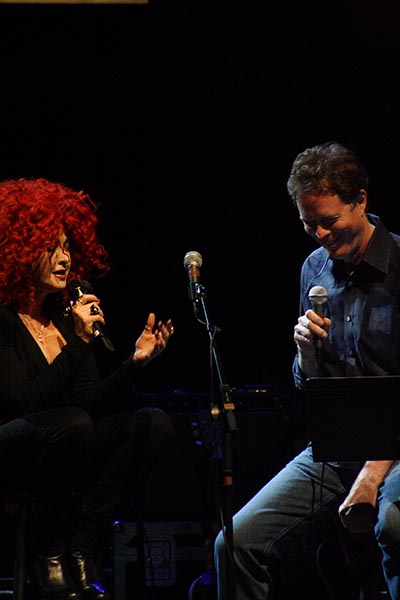 After a few songs Cyndi sat down with eTown host Nick Forster of the Grammy-nominated, award winning bluegrass band, Hot Rize. Just like the conversation I had with Cyndi, she once again took charge in the interview with Nick. It seemed this was Cyndi’s show, rightfully so, she would respond to the questions sometimes answering Nick but overall seemed to just talk and ramble about whatever was coming thru her stream of consciousness. At one point a sound engineer walked on stage, trying to act casual by slipping a note in front of Nick, that was can only assume said something to the extent of “HURRY HER UP”.

Cyndi Lauper showed amazing stage presence while singing, her timing rhythm and general understanding of music really shined thru during her performance of the Blues. As Cyndi told the Mountain Weekly News “I always wanted to sing Janis(Joplin) covers” she is well on her way, watch out Janis..