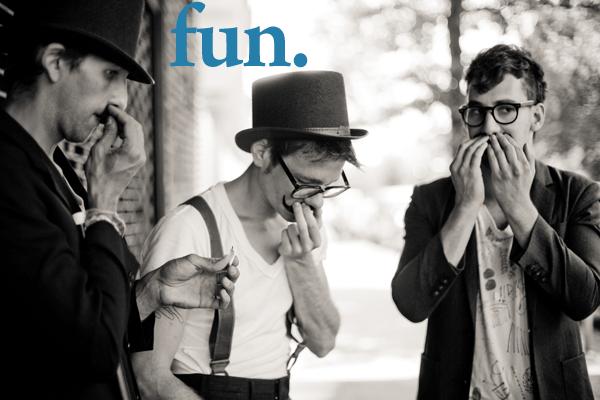 Nate was a member of the indie pop band The Format that split up back in 2008. Thankfully Nate Ruess decided to team up with fellow friends Jack Antonoff of Steel Train and Andrew Dost of Anathallo to form the band fun. As their name implies fun is all about exciting and fun sounds and lyrics to form a wonderful and talented song. Fun is about to launch a three month long US tour performing with Panic! at the Disco. I was lucky enough to squeeze in an interview with Nate to talk about the upcoming tour and new album.

I was greeted with an exuberant and happy go lucky Nate who was excitedly munching on an everything bagel with lox. You gotta try it with lox, it’s the best Nate remarked.

MWN: You guys must be getting busy gearing up for your tour which launches in nine days.
Nate Ruess: Yeah, it’s pretty gnarly. We’re like trying to finish up our album. We’ve been recording for the last couple of months so we’ve been trying to fit in just rehearsing for tour and getting ready for tour as well as well as finishing up the album so it’s kind of ¦it’s a little hectic.

MWN: Yeah, the tour starts in just nine days
Nate Ruess: Oh shoot, is it that soon? Yeah I guess it is.

MWN: Will you be recording while on tour?
Nate Ruess: No, the album should be done at that point, we’ll probably be doing other extracurricular stuff but not for the album it’s self.

MWN: Last month fun. Performed at Coachella for the first time, how was that experience?
Nate Ruess: I thought it was really good. I was worried because I really don’t do too well in gigantic crowd environments, so I think everybody was so worried about how I would react. Because everybody was so worried and everybody figured that I’d react, I had to prove them wrong. Nate continued to talk about how well Coachella went, besides the heat. There are no plans to return to Coachella next year.

MWN: Your Song Walking the Dog is featured on a new commercial for Expedia, was this a big moment for the band?
Nate Ruess: Yeah, we were told it was going to happen but then it didn’t. Then all the sudden we were told the commercial was airing tomorrow. They didn’t want us to get our hopes up. It was a big deal, I guess we’ve been pretty lucky.

MWN: Your upcoming tour is with Panic! at the Disco, was this a big deal for you guys.
Nate Ruess: Yeah, they’re good friends of ours. We’ve done a song or two with them already. They hadn’t met before Fueled by Ramen, but they have become fast friends, and the tour should be a lot of fun.

MWN: This is a US tour, are there any plans to stop in the UK?
Nate Ruess: We’ve spend three months out of the last year in the UK so I think we’ll take it easy five months or so before we head back.

MWN: Jack, Andrew and yourself are from all different locations, would you say your fan base is stronger in some places than the other?
Nate Ruess: The East coast has always been really good to us, it makes it easy for me to travel because I just moved to the East Coast. Each crowd is different though. I need to remind myself that crowds act differently and that’s just how they are, it’s nothing personal.

MWN: I know Andrew says some crazy things on Twitter, would you say he’s the goof ball of the band?
Nate Ruess: Yeah, he actually talks about his twitter persona a lot and wonders if people think that’s what he’s like. Jack actually made fun of Andrew pretending to be his twitter persona.

MWN: How would you say fun.’s new album will Compare to Aim and Ignite
Nate Ruess: Nate explained how he always loves writing new material for a new album. it sounds like a fun. album, but I think we’re always growing and improving.

MWN: When can we expect to get your latest album?
Nate Ruess: It should be released late this summer.

It sounds like we are in for quite the surprise for both the tour and new album. Thanks to Nate for taking the time to speak with Mountain Weekly. Fun will be performing live at the Ogden theater June 28th.

Be the first to comment on "Interview With Nate Ruess of Fun."