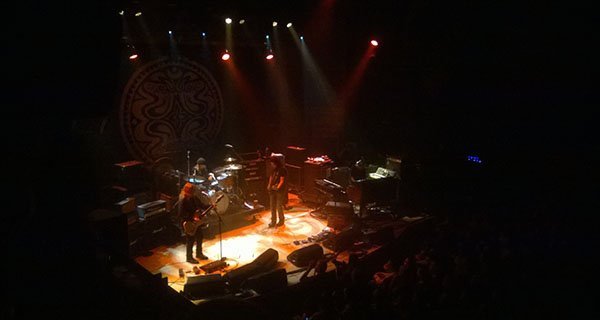 DENVER, CO – Fans of Gov’t Mule will not be surprised with this review, and I’m sure some could easily predict what I’m about to write. The Mule kicked ass in their typical manner: throwing sweet soul, guitar licks, grooves, and jams at the audience constantly. They played a variety of their material, which, as any fan knows, spans a plethora of albums and genres. Songs that I recognized came from their albums; Dose, Life Before Insanity, Mighty High, and By A Thread. Sadly I have yet to pick up their latest album, Shout, which I’m sure some of the songs played were from that album too.

In typical Mule fashion, they played two sets and an epic encore that consisted of some wicked jams. Even the singer and guitarist from Vintage Trouble were lucky enough to be invited out to jam with the Mule during their final song. On a side note, Vintage Trouble, the opening band, put on a great show as well. They are still a young band with plenty of room to grow, but they stand on a solid base and definitely have some great talent.

The fact that Gov’t Mule was playing on a random Tuesday night and still sold out the Ogden Theatre is testament enough to their awesomeness and die-hard fan base. There was an air of excitement before the show, even though most there had seen The Mule before. You never know what you might get with them, but you always know whatever they pull out to play will be on point, soulful, and downright classic. With every mention and whisper of, “The Mule,” while waiting in line the crowd easily became more excited and amped for the forthcoming set.

In the end, all I’m saying is what was already mentioned in the first paragraph: Gov’t Mule’s Ogden show was awesome. The Ogden provided an intimate setting for a band as large as The Mule. By large, I’m referring to the four man band’s sound here. It was almost comical seeing all of their gear crammed in a horseshoe formation on stage, but that did not detract from their quality. Seeing The Mule like that compared to the huge outdoor venues they normally play was a nice treat. If you were there you can attest to that fact, and if you weren’t, then I apologize for rubbing it in your face. Next time The Mule is around your area, don’t make excuses for why you can’t make it, and instead, make excuses for why you will.