“It’s a real shame that they got to cost so much” is the final lyrics to the song Money, Money from the Grateful Dead which could easily be adapted as the theme song for the upcoming run of shows billed as Fare thee Well.

Apparently these 5 shows will be the last time the remaining members of the Grateful Dead will ever play music together??

It’s with mixed emotions that even write this as I have been pumped for months for the upcoming shows. One thing that didn’t sit well with me from the onset was the poor planning on the promoters part, aka Peter Shapiro and Madison House. The demand for these tickets far outweighed the supply when they shows were originally put on sale for the Chicago run.

According to Relix.com an estimated 60,000 mail order request were sent into Grateful Dead Ticketing for the Chicago shows alone. For anyone not familiar with buying tickets via mail order it works like so, you go to the Post Office buy a mail order, send it in and hope it gets cashed by the band, otherwise you get the mail order returned without winning tickets to the lottery to see your favorite band, yikes.. This becomes an issue when personally music is my religion, imagine having to win access to your local church or synagogue?

After the Chicago tickets sold out they quickly become available on the black market through sites like Stubhub.com which had a 3 night pass selling for – $116,000 as reported by CNN with obstructed views seats running $1,400 a – 1900% increase over face value.

Knowing that most Deadheads believe in karma I began to wonder how so many tickets had become available on the black market, two words come to mind “Da Bears”. Apparently Chicago Bears season ticket holders had first access to purchase tickets before the mail order period.

Out of all my friends, and fans of the Grateful Dead that put in request for Chicago I know of zero people that won tickets via the lottery. This caused a stir within the Grateful Dead community and actually had some of the nicest people in the world starting to talk negatively about a band they love so much. Some of which have been on the Truckin’ along with the Grateful Dead for decades.

So what were the promoters to do now? Add even more shows to Soldiers Field in Chicago, possibly allowing more fans to see the “final” run of shows and say goodbye to the remaining members of the Grateful Dead??

And then came the announcement that the remaining members of the Grateful Dead and Trey would play 2 nights on the West Coast, prior to the final shows in Chicago.

When people think of the Grateful Dead images of sunshine and the Haight-Ashbury come to mind surely not Chicago.

Since the poor folks at Grateful Dead Ticketing had to open 60,000 + mail order envelopes with request for the Chicago shows ( I can only imagine what the local post master was feeling ) they decided instead to do an online mail order to handle the demand for the California shows.

And with that my online request went through, I opened an email that stated I had won 2 tickets to each night of the California shows. What an honor to be able to see my favorite band and favorite guitar player jam out together outdoors in my home state. I for one had no plans to head to Chicago in the heat of summer, so this was a big relief!

For anyone that got skunked there is still hope, tickets for the Santa Clara shows featuring Trey Anastasio and the Grateful Dead are currently available on Stubhub for super cheap. 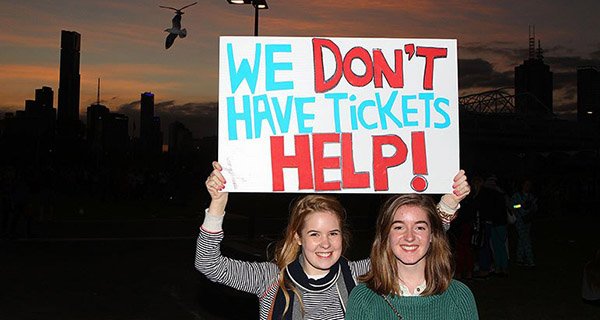 I am willing to bet there will be stacks of tickets on the ground in front of the venue. Supply and demand again eh..

Tickets for Chicago shows have come down considerably on Stubhub as well.

The business side of the music industry has always turned me off. One thing I will always recommend is to never buy tickets on the black market, scalpers have no business being in music, save it for professional sports.

SAN FRANCISCO, CA – All of the original living members of the Grateful Dead (Mickey Hart, Bill Kreutzmann, Phil Lesh, and Bob Weir) will be in the Bay Area of California on June 27th and 28th along with Trey Anastasio to celebrate 50 years of American music.

Odds are Jerry Garcia’s presence will be heavily felt by all, its California after all..

[update as of 4:30 MST on 4/10/14] The shows have been officially announced and ticketing is underway Checkout http://www.dead50.net/ for more details

The Grateful Dead is a San Francisco band, enough said? To think that the band would leave the city that formed them in the dust is silly. Everyone knows that the Bay Area and San Francisco is one of the best places in the country to see music, throw in the Grateful Dead and real hippies and you have an event that will be celebrated by all.

Hotels surrounding the stadium are almost all sold out.

Kudos to the Grateful Dead family for pulling this off. I for one will be in San Francisco in late June, hotel has been booked..