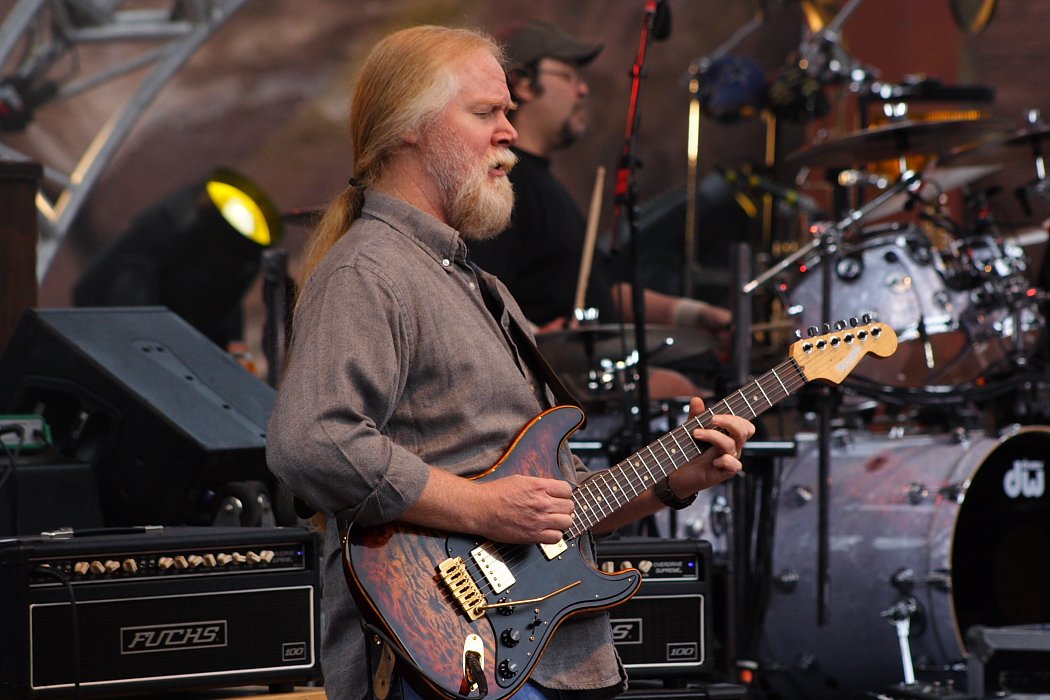 This is part 1 of our interview with Jimmy Herring, lead guitar player for Widespread Panic. We dug deep to find out about Jimmy’s introduction to music.

MWN: Awesome! Where was that?
Jimmy: It was in Fayetteville, NC at the Cumberland County Memorial Auditorium. I was 10! I went with my friend & his parents cause you know it was a big deal for my parents to let me go. But because my friend’s parents’ were going and we sat with them, they let me go, I couldn’t believe it. It was the Billion Dollar Babies Tour. Which by the way is still good music. I mean, that album, Billion Dollar Babies, is KILLER! My favorite stuff of his is the early stuff, Alice Cooper used to be a band, like before ‘Welcome to my Nightmare’. That was the first album w/out the band. So all the records before that are the records I grew up listening to. ‘Love it to Death’ & ‘Killer’, ‘Schools Out’. Ya know, they had some good stuff & had Bob Esring producing & that guy, was a genius! They make some valid music but I try n tell that to my jazz-bo friends & they just laugh in my face. I’m like, “yeah man, that early Alice Cooper stuff, it’s really good!” and they start laughing, “are you crazy?” 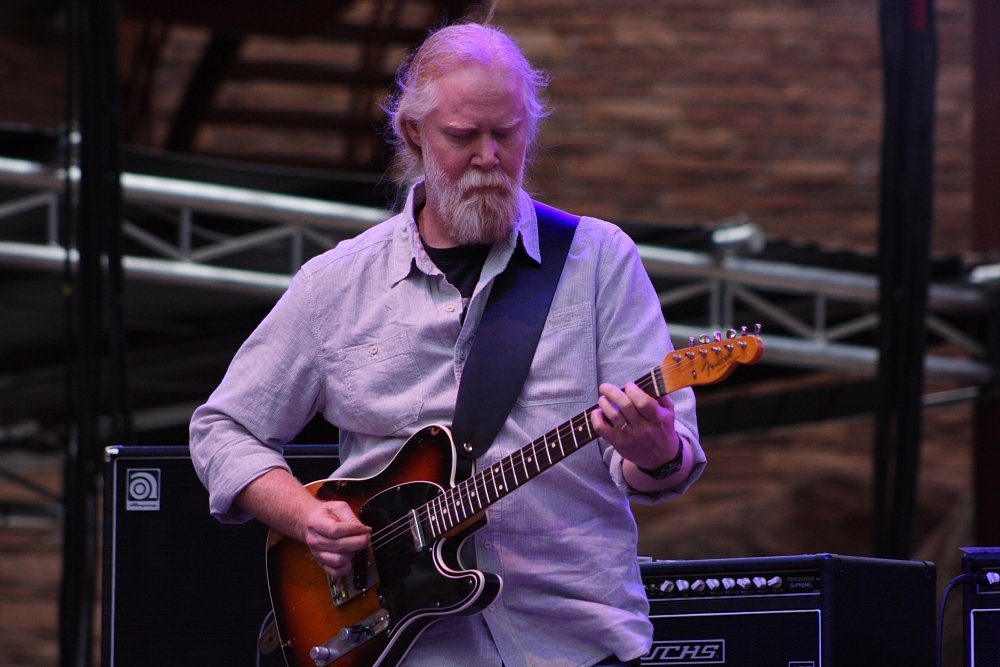 MWN: Since we’re talking about Alice Cooper did you have anything to do with Panic choosing ‘Welcome to My Nightmare’ as your opener for the Halloween show in Asheville, NC in 2007?
Jimmy: No, I didn’t push for that but when it happened, I thought it was cool and I was glad we were doing it but I was trying to get those guys to listen to some of the earlier Alice Cooper. I mean ‘Welcome to my Nightmare’ was cool but I went, “ok, that’s great but what about these other songs?” you know it was Halloween and uh, there’s a song called ‘Dead Babies’ (laughing) it’s off, the ‘Killer’ album, ya know, I don’t know what year it came out but when I was listening to him, it musta been like ’73, when I was 11 years old. You wanna talk about nightmares, man, ya know & ya wanna talk about Black Sabbath, giving ya images in your head that scares ya & stuff? well, Alice Coopers records were definitely like that.

MWN: Like with his face all painted up & playing with pythons…
Jimmy Herring: Yea, you didn’t even have to see the visual to get the images. those records were unbelievable! If you haven’t heard ‘Killer’ or ‘Love it to Death’ those albums are very image driven. Bob Esrin the producer, was an absolute genius, if you haven’t heard those records man, go check em out.

MWN: One of my favorite bands, although I did not get to see them is Black Sabbath.
Jimmy: Oh my God, I love Black Sabbath! I was lucky enough to see them too. I saw Black Sabbath with Ozzy when I was 14. It was a great show! Incredible show!

MWN: Paranoid’ was the very 1st album I ever listened to all the way through I was pretty freaked out after listening to that!
Jimmy: it’ll scare ya man, it’s scary, it’ll give you nightmares! (laughing)

MWN: So what was the 1st album you ever bought?
Jimmy: The first album I ever bought was Jethro Tull’s’ ‘Thick as a Brick’. I came from a family with two older brothers, one was four years older than me & one is 7, so, they already had a massive record collection man and ALL the great stuff, I mean, The Beatles, The Who, Santana, Led Zeppelin, The Allman Brothers, Jimi Hendrix, ya know? they had everything that all those bands had done and of course, they had all the other stuff too, Van Morrison, The Band, I mean everything, Bob Dylan, ya know? 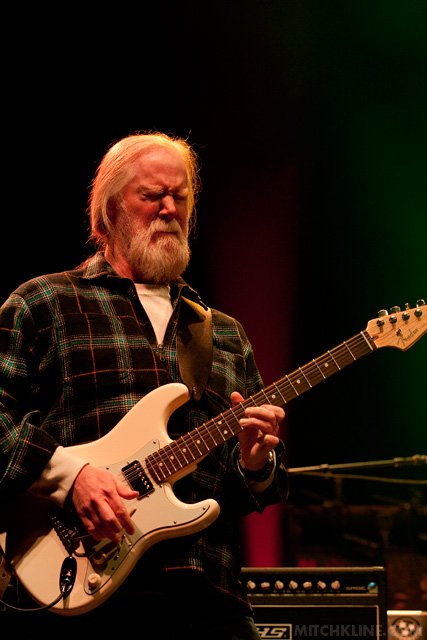 MWN: That’s a lot of generational music you just named right there, generation after generation of people will still be listening to that music and you don’t get that out of music today. Bands come out and you forget about em after 8 years or so…
Jimmy: If they’re lucky enough to be around for that long! There have been some really great bands, like I love the Seattle bands, like Nirvana, Alice in Chains, Soundgarden…

MWN: Pearl Jam…
Jimmy: Pearl Jam, absolutely! all those bands were good, I thought all those bands were really good. they were all different from each other, which was cool, but you’re right, my brothers already had all those records right there at my fingertips, the most amazing music! Not to mention the Miles Davis & John Coltrane records they had.

When I was 10 or 11 years old my grandmother asked me what I wanted for my birthday and I said, “I want a record!” so she gave me the money to go buy a record and I went to my brothers & I said, “What do I need to buy?” and they said, “Thick as a Brick!” that was the only one they didn’t have, ya know, cause it was brand new at the time. well, I don’t know if it was “brand new” but that was the one they didn’t have yet. So I went to this record store & bought ‘Thick as a Brick’ and spent the next, two months, just getting lost in it. That is one of the most fantastic records I have ever heard, I mean to this day! I just read somewhere, the guy from porcupine tree, Brian Wilson, has remastered that record or is about to remaster that record, remix it and remaster it. Anyway, I just love that record. I still think those Hammond B-3 sounds on that record are just untouchable! I don’t think I’ve ever heard a better Hammond B-3 sound in any rock music that I’ve ever heard. I have it on my iPod, I have it on vinyl & I have it on cd too and I didn’t have it for years. for years I just had the vinyl & it sat in a box & we didn’t have a turntable but then I started longing for it when I was on the road with Panic about four years ago and Dave Schools, that guy is a musicologist! I mean, he knows as much music as anyone I’ve ever met! well, we started talking about ‘Thick as a Brick’ & I’m like, “man, isn’t that the greatest album ever?” He’s like, “Awe, that’s an amazing album!” so we started talking about the little things about it that we all noticed, so, I immediately went out & bought it. I put it on the iPod but he had to do it for me, (laughing)…..

‘Thick as a Brick’ lemme tell you a little about it. That entire record is one composition. Well what they did was, they had this incredible poem that made the lyrics to the record and then they have these beautiful musical themes and variations to those themes, that keep coming back, except every time they come back, they treat it differently, like they add things to it or they orchestrate it a different way. it’s absolutely mind-bending!! so grab it, if ya haven’t already.

MWN: We don’t seem to get a whole lot of outta music today, where you’re scared after you listen to an album, or some other emotion other than, oh my god I love this album!
Jimmy: Absolutely! I don’t mean to get stuck in some kind of an “old guy talking about the good old days” but, back in those days the music was so full of images, there were no videos, so, what happened during the video period is, people were watching the music rather than listening to it. I think what was happening was, if they associated the visual more than they did the audio & then heard the song on the radio later, they would see what was on the video rather than making it up in their own imaginations, so that’s lost.