The Mountain Weekly News had the pleasure to kick back and chat with Tim Carbone and John Skehan of Railroad Earth before there set during the 2010 Mile High Music Festival. We sat down just behind the main stage and started the interview as reggae legend Jimmy Cliff started to perform in the background.

Hey everyone, welcome back to Colorado… What do you think of the festival so far?
TC: Well we just got here and were whisked over for the interviews, now were hearing Jimmy Cliff, you cant beat that!!
JS: Same experience Jimmy’s great

So I heard you liked to eat at the Red Iguana in Salt Lake, Utah any places in Denver you like to eat while your in town?
TC: Oh yeah baby I’m actually starting a musicians food blog, were filming the pilot at one of my favorite restaurants in the world The Watercourse in Denver. The whole idea came from how many times we don’t know where to eat on tour and would settle for pizzas or hamburgers, there are tons of great places to eat near the venues, well feature it on the Railroad Earth youtube channel.
JS: There’s a place walking distance from Cervantes in Denver… sole food joint down from Cervantes with hush puppies, sit down meal. Since eating there im hooked and want it once a week, sometimes go to local supermarket make Jamaican mac cheese real inexpensive

I see you guys started in NJ, Can you tell us how you got on Telluride Bluegrass Festival? Was it a breaking moment for you.
TC:It was our 10th gig overall, its a little fuzzy… We made demo, kind of decided were gona be band, our manager got demo to Craig Ferguson at Telluride and it blumes from there..
JS: That pretty much put us on course for a tour, we had come a long way, we accelerated the process of making a full length cd

Yarmony Grass is next weekend out near State Bridge, have you guys ever spent any time camping and playing music in the area?
TC: We played the Yarmony Grass Festival the year the state bridge burned down as well as the Yarmony Grass at Copper Mountain I fish that part of the Colorado, VERY beautiful, pretty raw, camping.

Can you tell us about your taping policy, do you encourage fans to tape and trade music?
TC: Yeah always have encouraged audience taping, we don’t give out patches (soundboard) The payoff is were exposed in an expansive way. we hope it doesn’t effect sales, but have reasons to believe it all cascades, causing a new paradigm to be created out of necessity, how do we make a living out of this.
JS: Its always been going on in the live band genera, the dead bootlegs come to mind, a friends showed up after tour with 32 shows, they took 6 hours to copy, a real commitment. You would physically sit down with the person with the tape 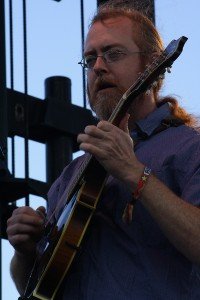 TC: Could go furthur, a cat from New York had 2 tracks of Charlie parker side stage from the 50’s not greatest but his solos were like a fingerprint. Almost every time this guys recorded it, passed around among aficionado.

What was it like having Phil ( Lesh ) playing tunes that Railroad Earth wrote, and playing with Phil?
TC: John and I went to the Warfield ( San Francisco ) in 2003 or 2004 to play with Phil ( Lesh ) and Friends. It was an incredible experience,
JS: Phil’s a great band leader,
TC: fantastic experience lots of material to learn, I learned 56 of 70songs
JS: Was a great trip 2 with 2-3 days of rehearsal, a lot of music to learn, 3 nights and over 70 songs, rehearsal was most fun, we had some amazing jams we wish had been recorded.
TC: It was even wilder when he wanted to play some of our songs… The first song we played with the whole band was Uncle Johns Band (Grateful Dead) we mingled into the misc, dude, we blew the roof off, Holly F*ck..

Be the first to comment on "Railroad Earth Interview"