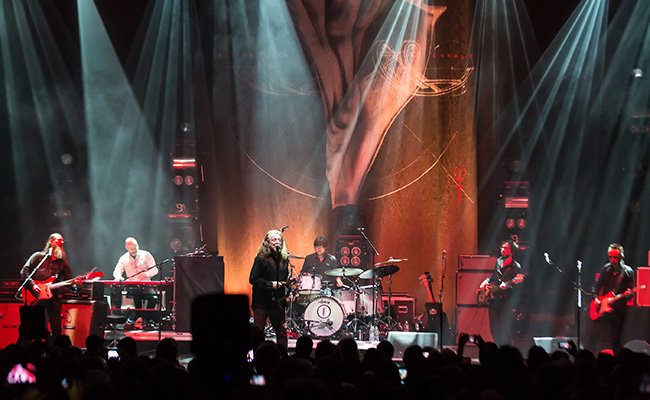 DENVER, CO – Watching Robert Plant perform with his band, The Sensational Shape Shifters, this past Saturday at the Fillmore Auditorium in Denver was an experience boarding on the spiritual/life-changing spectrum. My words cannot adequately describe the atmosphere and excitement of that night, however, I can tell you now as I write this review that my heart is still thumping from disbelief and joy from seeing one of rock’n’roll’s greatest vocalists ever.

Before I continue, I should make note that the Last Internationale, who opened for Plant and his band, held down their set-list, but honestly, their set was dwarfed due to the over anticipation of seeing Robert Plant. Everyone was excited; from teens to seniors we were there for one ultimate reason: Robert Plant, Led Zeppelin’s frontman. But ultimately here, my point being that the Last Internationale are a good match for Plant’s Sensational Shape Shifters, as they bring a fresh tone and energy to the indie-rock genre. The Last Internationale will be a band to follow and watch develop for sure…But…

Back to the reason why I was there, and why 95% of the audience was there: Plant, Robert. As soon as Plant came on stage the place was under his spell. Opening with Zeppelin’s No Quarter, everyone was instantly thrown into their own flashback, their own fond memories of when they were first introduced to Plant’s mesmerizing vocals and lyrics. Their set list consisted of roughly 30% Zeppelin tunes, with the rest being a mixture of the Shape Shifters’ old and new material. The band recently released their latest studio album lullaby and… The Ceaseless Roar, which was obviously promoted too, and quite successfully, as I have been recommending it to all rock fans.

Sadly, at this point all I can really recommend is YouTube recordings for live Plant performances, and/or buying a Sensational Shape Shifters CD, as their brief North American tour is concluding October 7th at California’s Hollywood Palladium. So for a few lucky souls, they still have the opportunity to see this touring extravaganza, and for a few lucky souls, they already have.

Looking beyond the fact that Robert Plant performed (amazingly) a few Zeppelin songs, the rest of the Shape Shifters’ set was also entertaining and enjoyable from a music enthusiast’s point of view. The name, “Shape Shifters” is appropriate as the band can seamlessly transition from a Zeppelin jam to a bluegrass infused folk-acid-rock jam to a full fledged classic rock vibe. Also, during their finale, the Shape Shifters pulled out some heavy, psychedelic rock-dance jams, with Plant’s vocals assisting in the final face-melting segment.

In conclusion, Robert Plant and the Sensational Shape Shifters are great and completely worth seeing live, especially if one is a Zeppelin fan. If not, I wonder why you read this far as the writing here is not half as interesting as Robert Plant.