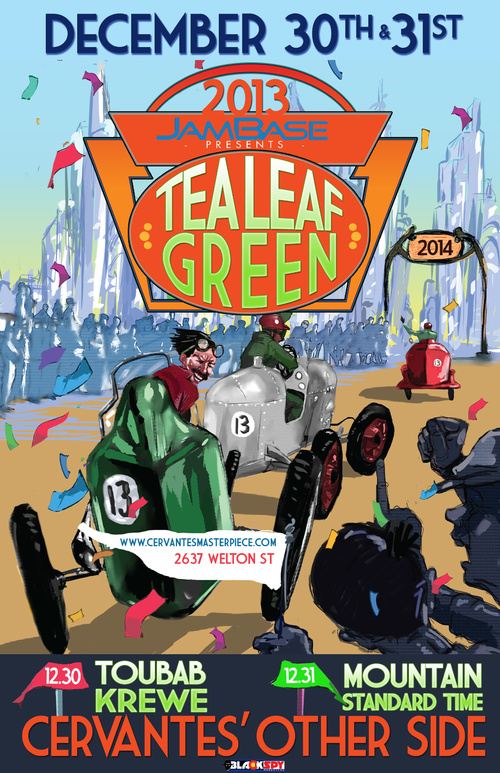 Mountain Weekly News: So you will be playing Cervantes in Denver for two nights during New Year’s

Trevor Garrod: We going to make it a fun time party, with a 20’s party theme. Everyone likes to dress up these days. Josh Clark our Guitar player made the poster; it has an old style race car on it. People like to dress up for Halloween and other special events, so why not New Year’s Eve. “If you don’t have a costume on then you aren’t at the party”.

MWN: Tell us a little about the TLG Trio

Trevor: Basically 3 of us guys branched off and did a trio project, It is myself Reed Mathis and Cochrane McMillan, we started the project while opening up for Mickey Hart from the Grateful Dead. We don’t play Tea Leaf Green songs, so the name can be confusing for some people. We have been playing together for so long, it’s a great way for the three of us in improvise, and we are like kids in a sand box with no rules or limitations. I am about to go into the studio right after this interview to lay down some music for our 2nd Trio recording.

MWN: Whats up with the book “Swing from the Stars”

Trevor: The author was inspired by our music, so he wrote a book of short stories based on our music. It’s a weird but cool collaboration. Not many bands have books made based on their music.

MWN: Tell us about the New Album “In the Wake”

Trevor: This latest album was our most studio experience; it is a little different than our past experiences. We constructed this album in the studio and took our time. We only did one take of each song. It was like sculpting clay, it was our most collaborative effort. We worked with producer Jeremy Black, He’s the best producer I’ve worked with, and he is a positive influence to our music. And knows how to push us in the right direction and not just record what we are doing. The new album is an evolution of our music and an artistic collective of what were can create as a band verses just jamming in a studio.

MWN: Now that you have toured and have played for a while, do you look at things from a different perspective?

Trevor: You start off with a sense of romance in a band; it’s not as romantic as you thought it would be. It’s not like Jack Kerouac’s on the road which you think it will be when you first start. At one point I didn’t have a residence and the road was literally my home. We aren’t going to tour as much this year, we are focusing on certain projects currently. 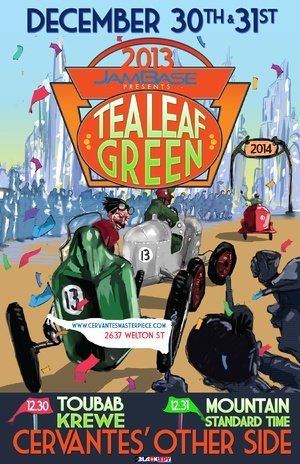 MWN: Are there any places you like to play more than others?
Trevor: I love playing the big cities, Chicago, New York, New Orleans, Atlanta and we love Denver. I don’t want to patronize you but I do love Denver, some of our booking agents are there and we were accepted in Colorado before some of the other states.

MWN: Is there anything that currently inspires you or that you are looking forward to?

Trevor: This TLG Trio record is going to be really cool; I’m pretty excited about that currently. Tea Leaf Green will have some really cool announcements for 2014; I can’t talk about those just yet.

MWN: What do you do for fun outside Music?
Trevor: I’m big into backpacking and hiking, I majored in botany in college. When I have time off I go backpacking. Mout Tam it’s the highest peak in the bay area, it’s a great spot near the city, as close to heaven as you can imagine.