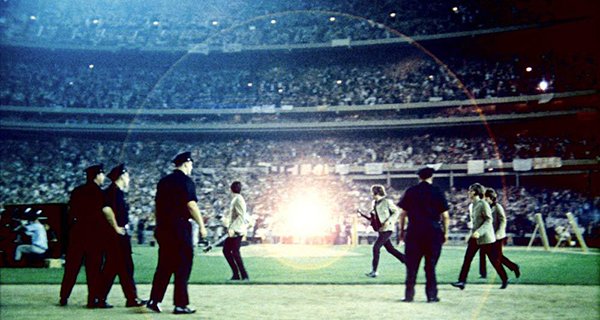 50 years ago what the world knew about rock-n-roll was shattered to pieces when the The Fab Four aka The Beatles played a sold out concert at Shea Stadium in New York to 55,000 screaming fans.

Considering an estimated 75% in attendance were teenage girls it was almost impossible to hear the actual concert.

The scream however didn’t stop John, Paul, George and Ringo from playing a rocking 12 song set that lasted just over 30 minutes, which can be considered the first real rock-n-roll concert American history. On this historic night The Beatles opened with their hit song “Twist and Shout”.

Sounds is bad for the first 2 minutes.. Be patient or fast forward 🙂

According to Mary Bregman whom was in attendance “I was very upset because I really wanted to hear them sing but due to the loud screams could not. I recall Paul trying to quiet the crowd but it was a losing battle. Even so, I’m glad I was there to be part of the experience”.

Judging by the audio quality in the video above it seems like this was more of an event to attend then show to actually listen to. That being said the video seems to have been remastered and is worth a watch/listen.

After all was said and done, these young lads and their fans surely all enjoyed a smile as Beatles Mania was now in full swing.

NEW YORK, NY – 29 year old skier Chris Branca, a former CU Boulder graduate decided to go skiing down Park Ave in New York City during the mega blizzard that rocked the big apple. With the helps of of one of his friends, mother nature and a heavy dose of Schnapps the guys went off in search of first tracks down Park Ave.

“We kinda pushed it more and more as we tested the streets, until we finally decided to gun it down Park Avenue,” Branca told nymag.com “My friend’s amateur opinion of the conditions outside prompted my bravado.”

As my mom says you cant keep a surfer out of the water, nor can you keep a skier off the snow. I’m just glad theses guys didn’t hit any hidden snow snakes down Park Ave. I can only imagine what falling at 40mph ontop of a NY City street would feel like, snow or no snow..

Regardless A+ for effort, can you imagine if the NYPD had seen this going down, oh my!!

Be the first to comment on "The Beatles LIVE at Shea Stadium Rock Out with 55,000 Fans"