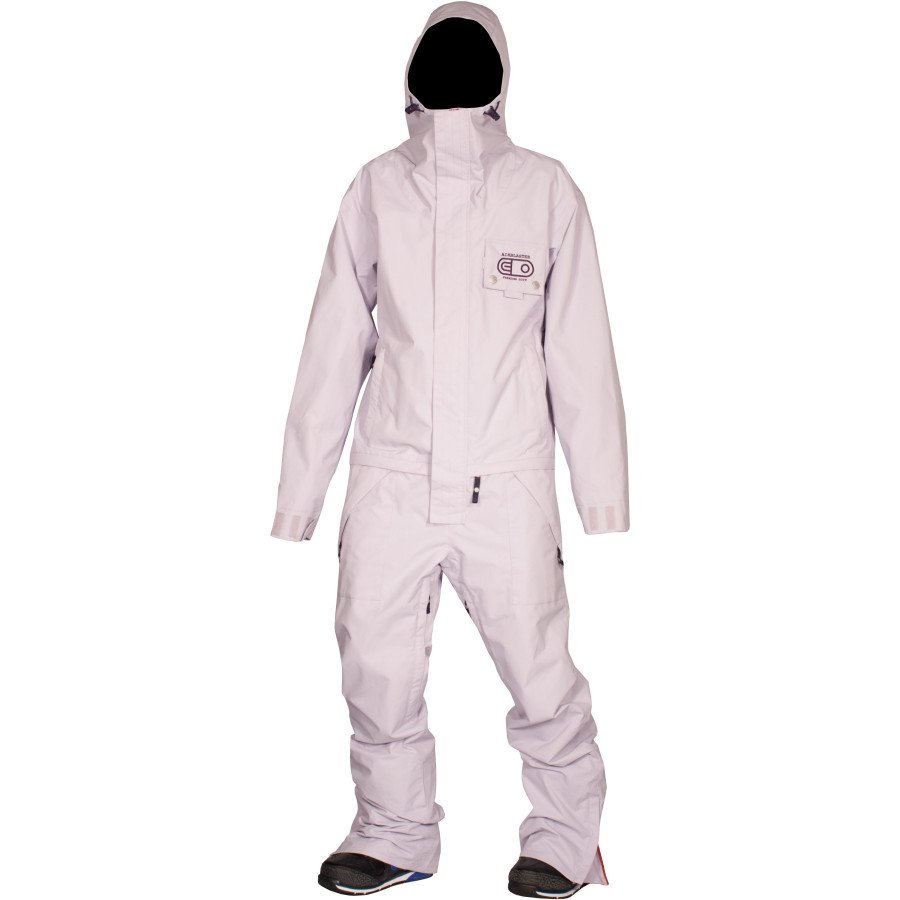 I’ve never owned a one-piece snowsuit before the Airblaster Freedom Suit, but I have to say that I loved it! I don’t know if I would ever buy one myself (I’m more of a traditional guy), but a friend lent me one for a winter trip to Mt Baker in Washington and I definitely put it to good use.

When I first slipped into the Airblaster Freedom Suit, I thought that it looked awesome. It has that one-piece retro look that is so cool, but I was a little bummed out at how baggy it was. It had an almost gangster look to it. If that’s your thing, then you’ll probably like it, but I prefer that my gear fits a little snugger. A cool feature is that the suit actually zips apart at the waist so you can rock the pants or the jacket separately. I felt pretty unstoppable while wearing this as there was almost zero chance of snow getting inside.

The Airblaster Freedom Suit is top-quality. It’s made of nylon and doesn’t have very much insulation, so you’ll have to layer something underneath (ninja suit) if it’s cold where you usually ride. The waterproof rating is 10,000mm which I was a little worried about at first, but so far I haven’t gotten wet at all. It also comes with a fully attached hood and several pockets.

The weight on the Freedom Suit is great. It’s very light, but keep in mind that you’re going to need something to go underneath it since it isn’t very thick. I had mixed feelings about the Freedom Suit’s mobility though. It is baggy, roomy, and light, so you can definitely twist and turn with ease, but it’s almost overly baggy I almost felt like I was in a sack sometimes.

The Airblaster Men’s Freedom Suit comes in several different colors, but it seems like everywhere that I look only the white/gray/lavender type color is available. That’s okay though! In my opinion, this color looks the best and it is the one that I used. Like I mentioned above, the suit is really baggy. So this Airblaster product’s style rating depends on your personal taste. I’m 5’10 and 160 pounds and the medium was what I rode. There is also a ladies version available, the Airblaster Women’s Freedom Suit.

I only used this suit for about two weeks while on vacation. After that time I returned it to the friend that lent it to me. Luckily, it held up during these two weeks of almost daily riding. It’s true that it did get a little bit of dirty, but what can you expect from a cream-colored outfit? The bagginess got in the way of my riding a little bit especially at the feet. It has a boot-cut so the ends of the pants go over the heels of your boots a little bit which was annoying.

I enjoyed wearing the Airblaster Freedom Suit ($360.00). It was definitely a little baggy, but it held up well and I never got wet. It definitely is handy if you’re doing hiking during your trip to the mountain. In addition, the full-zip waist is nice if you need to use the bathroom during a run or while in backcountry.