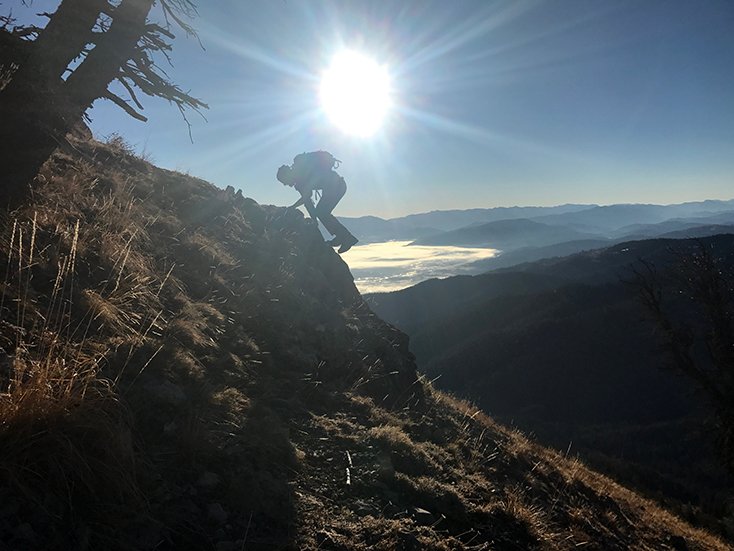 The Alpina Lhotse fits perfectly between everything else in my foot locker and for its category there really is nothing better. And other than my La Sportiva Baruntse, these are the most bulletproof boots in my collection and after putting it through the hard fall wringer they haven’t weakened in the slightest. 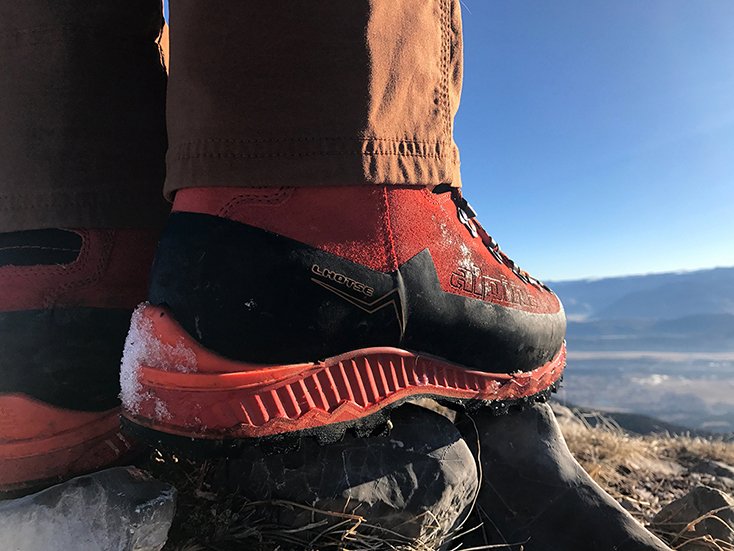 The Lhotse is like the Humvee of backpacking shoes. It has a full Vibram sole with a heel welt for crampon attachment (the Grivel G12s come to mind).

The lugs are deep, the exterior is heavy leather with a rubber wrap to keep out water. ¾ shank as a compromise between kicking steps in snow and scrambling over rocks. This boot was so strong it even made our annual list of best mountain boots for men. 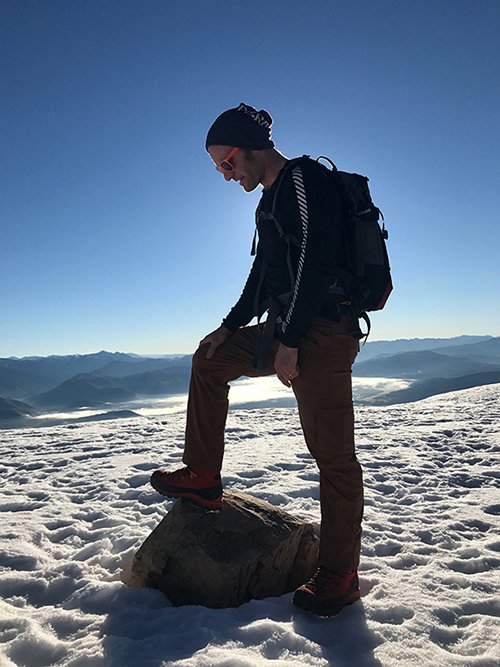 Ryan testing the Lhoste Boot atop the Tetons, Photo Borbay

I got mine in bright orange so a plus was it became my hunter orange (note: I still wore my orange hat).

Now, let’s get to the testing.

In the Tetons, there are three seasons, summer, winter, and mud season. Mud season can be the toughest to find the perfect boot because it will need to be able to hand every imaginable condition.

In the summer I live in my approach tennies for climbs and my GORE-TEX trail runners for long backpacking trips or, well, trail runs. In the winter I wear my waterproof skate shoes or softboots for everyday and my snowboard or mountaineering double boots the rest of the time. But what about in between?

Fall is a very dynamic season, a chance for me to indulge a few new hobbies while bridging my summer with my winter sports.

For example I wore the Lhotses hunting, where you’re clomping over mud and through frost and snow and semi-frozen creeks. I wore them cutting wood, where you need a hybrid between a construction boot and a hiking boot. I wore them on hikes where I start off down low on mud and rock and end up in mid-calf snow. These would be the boots I’d wear on a hike up Mt. Whitney early or late season as they’re flexible enough to get from Whitney portal to Trail Camp but then rigid and waterproof to chew up the climb up the snow chute.

On all my hikes I felt like there were tanks wrapped around my toes; it’s fun to step and balance on jagged razor rocks as you propel yourself forward and up. You can scramble easier than stiffer boots with cumbersome toe welt. 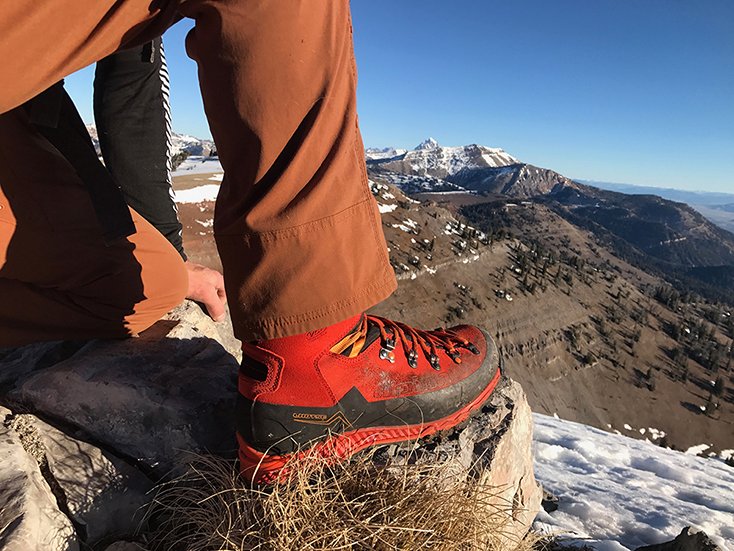 And while they were warm enough to keep the feeling in my toes as it dropped a ways below freezing, my feet didn’t turn into soggy bogs when the weather edged up over 60.

But let me make one thing clear: I won’t be using these for most of my summer backpacking nor all-snow winter expeditions.

Don’t expect these to be your go-to on a 20-mile backpacking trip through the Winds in June; they’re just too much boot.

And they’re not rigid enough for effective ice climbing, much less would I feel confident in their warmth on those -20 alpine starts. In the winter I prefer a toe welt if for no other reason than it provides a much closer and more secure boot/crampon interface to keep out snow and keep your spikes from loosening (plus fully-bailed crampons are much quicker to get on and off than the ones that have to depend on the tightness of the nylon straps to hold the toe down).

These are the perfect all-around superboot for mixed conditions. I crushed ankle-high mud and was able to scramble up class-3 rocky ledges no problem. I trekked calf-deep through creeks and snowy ridges without even a hint of permeation. These are my new go-to boots for all fall and spring expeditions that don’t require a long ascent with a crampon or a descent on a board. If you’re looking for a hiking/mountaineering boot to tick off the 14ers in summer, the Alpina Lhotse blows away all competitors.

In the end, these are the ideal final solution to the outdoorsperson looking to complete their well-rounded footwear collection. And with a heritage of fine handcraftsmanship stretching back 70 years and manufacturing in Slovenia and Sarajevo, you’re striking a blow against sweatshop labor and purchasing a product that’ll outlast even your most ambitious outdoor aspirations.

Be the first to comment on "Alpina Lhotse Mountain Boot Review"