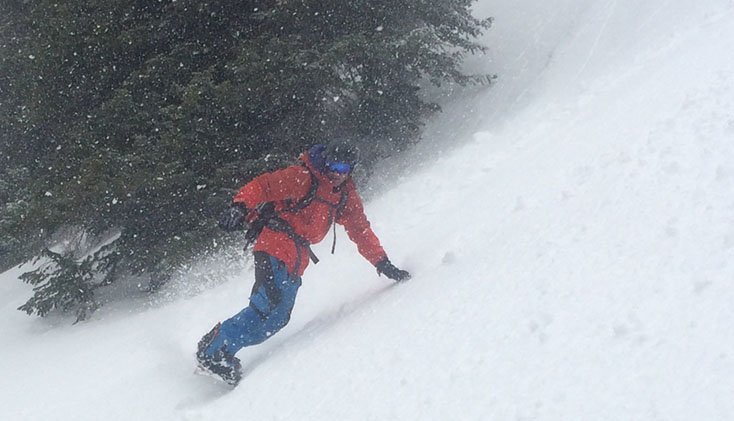 I spend nearly every other day exploring some portion of the Greater Yellowstone Ecosystem and I have a bold statement to make: L.L. Bean GORE-TEX Pro Shell is every bit the competitor for (and in my humble opinion maybe even superior to) any hardshell on the market.

The L.L. Bean 3-LAYER GORE-TEX GORE C-KNIT material gives the Patroller top-level water/windproofing while dropping weight and bulk (and there’s the ability to unzip the powder skirt because, let’s be honest, if the snow’s deep enough that it gets up in your jacket, you won’t give a damn that it’s in there). All told the jacket’s about as heavy as Uncle Leo’s windbreaker, triggering some real skepticism when I first picked it up. But I’m a believer now.

Spring has hit early here in the Tetons. Last weekend I started my slackcountry booter in some nice freezing rain. By the time I’d gotten to the peak, the frozen spittle couldn’t decide if it was gropple or maritime super glue. Everything was soaked through — pants, gloves, pack. Not the jacket. Not even a little. And my hat stayed dry thanks to the massive hood. If anything that’s one of the only problems: the hood, while fitting around a helmet, has a tendency to want to fall too far forward so I crane my neck like a snow-starved alpinist looking to heavens to see up.

Not to say that the other high-end shells I’ve tried out wouldn’t have kept the snow and wind out. They’re just twice as heavy.

Another solid addition to the L.L. Bean line is the 850 Down Jacket. Check out our L.L. Bean ultralight 850 down hooded jacket to learn more about this versatile piece of outerwear.

On a recent tour in the Big Holes, I started off down low in icey precip and shadey woods. Just a bit more westerly and higher I popped out into a mid-mountain clearing at the same time as the sun. Didn’t miss a beat. Took off my gloves, my hat, but my chest hardly started sweating. Elsewhere, on the rainy bootpack despite the rain and wind we were moving at my fastest pace of the season. Despite the sweat I felt building, even by the end the jacket was dry on the inside without letting anything in from out. To augment the breathability, the pit zips are wide open.

I’m still waiting to see how it does down the line. The material feels so light, will it tear when I scrape it against a jagged limestone wall? I can’t say. I can say the ninja hand sleeves are too short and when I put my hands in them I feel constricted, cuffs pull back, so I just eschew them altogether.

The hood issue I already covered.

This jacket is yet another medium that fits like a large. Or maybe a 6-foot tall 180-plus-pound man is actually a medium these days?

While I love the minimalist nature of this shell and rarely have a problem with my jacket being too cold, a rider who spends more time riding lifts than earning his or her turns might feel a bit short-shrifted to spend a decent chunk of money on a jacket you’ll need to wear a puffy under.

With an unmatched combo of waterproofness and lightness, of wind resistance and breathability the L.L. Bean GORE-TEX Pro Shell Jacket ($399) is a great piece of gear for people playing in the mountains.

Be the first to comment on "L.L. Bean GORE-TEX Pro Shell Review"