Whether you’re looking for downhill crushers, cross-country speed machines, or something in the middle, you’ll find something in our picks for the best mountain bikes for 2021. And you’ll find the best builds, lightest full-suspension mountain bikes, carbon, and stiffest wheels out there. All you have to do is pick the best ride for you.

Here’s our picks: best mountain bikes of the year. 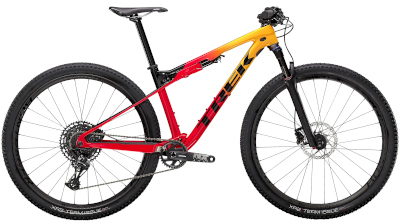 Cross-country race bikes aren’t always super exciting. They tend to be either hardtails or short-travel bikes that kind of look like trail bikes with steeper headtubes. Not so with the Trek Supercaliber. The 60mm IsoStrut suspension doesn’t really look like any other suspension out there. It’s made to ride like a hardtail with just a bit of give. And with how Jolanda Neff rides this bike, you can see that it goes like a rocketship.

The 9.7 build includes a 100mm RockShox Reba RL fork, a SRAM NX Eagle drivetrain, and Bontrager carbon wheels. You can spend more on this bike to get higher-level build kits, but unless you’re a professional or a semi-pro, this is probably the build you want. It’s super light, doesn’t require a second mortgage (though it comes close), and has a World Cup pedigree. 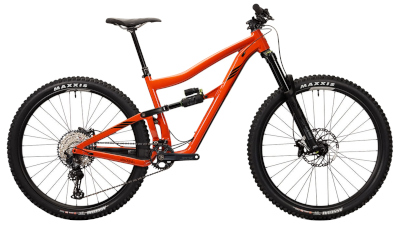 The Ibis Ripmo combines the best features of the Ripley, a short-travel trail bike, and the Mojo, a longer-travel all-mountain ride. It’s the best of both worlds, and you can get one for $4,000 because of the new AF build. Unlike most of Ibis’s bikes, this is an aluminum-framed steed. And that makes it much more affordable, which is largely how it earned its way onto this list.

With 160mm of travel provided by the DVO Onyx D1 fork and 147mm of DVO suspension out back, it’s the perfect middle ground between the currently popular short-travel trail world and the more downhill-focused enduro genre. This build comes with SLX all around, including four-piston brakes for more stopping power. Ibis’s in-house 35mm wheels and Maxxis Assegai rubber tell you exactly what this bike is about. 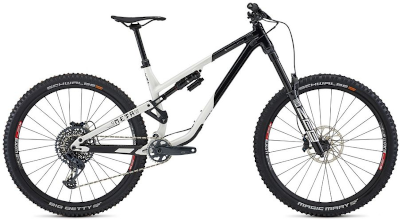 The Commencal Meta lineup is a bit weird. There’s the Meta AM (all-mountain), Meta HT (hardtail), Meta TR (trail), and numerous Meta e-bike options. Why do they all have the same name? Because they’re built for the same purpose: high-speed ripping. This is a steep-seat-angled, slack-head-angled destroyer. 170mm of travel up front and 160mm in the back is big enough for everything but downhill racing. And now that I think about it, you could probably race downhill on this beast, too.

The Team build includes a RockShox ZEB Ultimate fork, the highest in that line. GX Eagle components are some of the best out there, especially at this price. SRAM’s Code RSC brakes are downhill-level stoppers that will give you no shortage of power on the included 200mm rotors. And DT Swiss hoops are made for reliability under pressure. This bike is meant to be pointed downhill, but won’t let you down on long climbs, either. 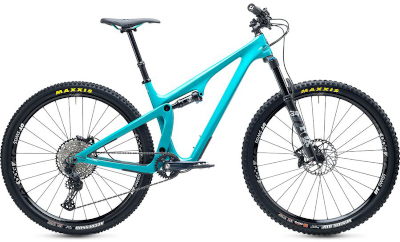 2020 was the year of the efficient, fun, capable, short-travel trail bike (or “downcountry” bike, if you prefer). And the Yeti SB115 is one of the bikes leading the charge into 2021. With just 115mm of rear travel and a 130mm Fox 34 up front, you get tons of pedaling efficiency without sacrificing the ability to descend. These bikes are built perfectly for the average rider who doesn’t need to crush World-Cup-level downhill tracks and loves all-day epics. One of the most popular mountain bikes in the Yeti lineup for 2021.

The SLX build of the Yeti SB115 is a solid middle ground (for a Yeti, anyway) when it comes to a build kit. SLX all around combined with a Fox 34 fork keeps the price just under five grand. The C-series carbon is seriously light, but isn’t quite Turq-level. And DT Swiss M1900 wheels are the perfect combination of weight and super reliability. If you want fast and fun without being totally overbiked, the SB115 is a great choice. 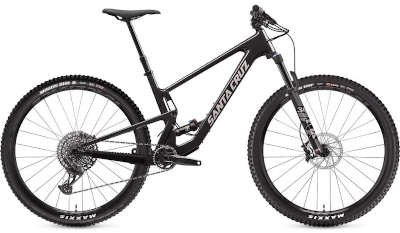 The Tallboy may be the definitive “downcountry” bike from 2020. It’s been redesigned as a more capable trail bike than previous versions, but maintains the sort travel and aggressive geometry of earlier years. What it has become is a 120-mm speed demon. Like the SB115, 130mm of travel from a Fox 34 ensures you don’t get wrecked on descents, but efficient short-travel suspension out back lets you pedal like a cross-country bike.

The Carbon S version of the Tallboy comes with GX Eagle components, DT Swiss wheels, and SRAM G2 R trail brakes. This is the new school of mountain bikes that caters to your average rider (even if they don’t have an average budget). Unless you’re riding really rough stuff, the VPP suspension with 120mm of travel should be all you need to get the absolute most out of your rides. 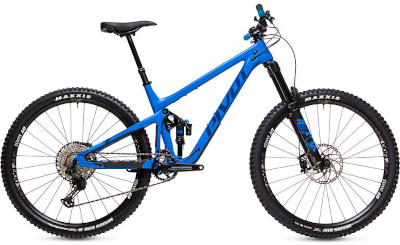 The Pivot Switchblade has always been a versatile bike. As the design gets refined, that only becomes more the case. One of the earlier bikes to be designed around both 29″ and 27.5+ wheels, you can still buy the bike in either configuration. With a new DW suspension design, the bike has become lighter and now has room for a frame-mounted water bottle, something that many riders are realizing the value of.

The suspension has been bumped up to 147mm, enough to put it in all-mountain territory, and the fork packs 160mm of travel, enough to handle anything but serious downhill. The 66º headtube isn’t as slack as many other bikes on this list, and the 75.5º seattube isn’t quite as steep as other options, but they’re still comfortably with modern ranges. That slightly steeper headtube will definitely be nice in the Rockies, where switchbacks are tight and rock gardens unforgiving. A combination of SLX, XT, and Fox components make this a solid value for the price. 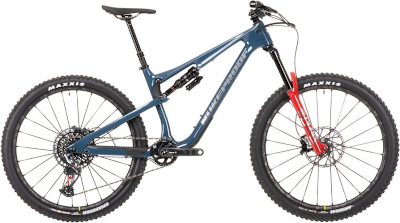 The Nukeproof Reactor is one of the most successful enduro bikes of all time. Sam Hill has piloted this beast to many a podium. The Reactor comes in both 29″ and 27.5″ versions, but we like the 275 because it feels a little different from the other bikes on this list. With smaller wheels, it’s built for maneuverability and fun.

This build of the Reactor 275 doesn’t hold back. The carbon frame is paired with a RockShox Lyrik Ultimate fork with 160mm travel, making clear that this is a bike built for enduro racing. 140mm of RockShox travel in the back ensures that you can still pedal, but is capable of soaking up big hits. The SRAM X01 build kit is almost the best you can buy from SRAM, and the Code RSC brakes will stop you at any speed (or at least slow you down). Mavic Deemax Pro wheels aren’t a common sight on many builds, but they’re perfect for the Reactor. 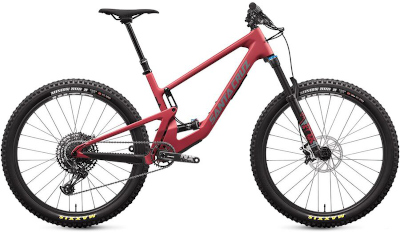 The 5010 has been on our list before. And you can expect to see it again. Santa Cruz goes all-in on the 27.5″ wheel size and makes no compromises. Like the Reactor, it’s designed around the smaller hoop size. Because of that, you get super short chainstays and an all-play, no-work attitude. Santa Cruz’s new VPP suspension further contributes to the fun factor.

130mm of travel in the rear puts this right outside of the downcountry range, making it more of a trail-oriented bike. It’s certainly not an enduro bruiser — you can pedal very efficiently with the frame and suspension design. But the 140mm Fox Rhythm 34 fork and WTB i30 rims let you plow through rough stuff. Don’t care about winning XC titles? Don’t want 160mm of rear travel? The 5010 is for you. 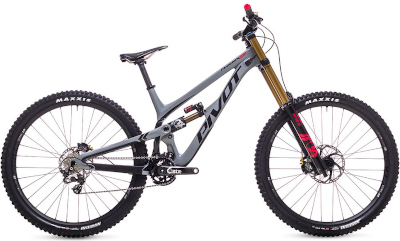 If you’re a downhiller, you already know the Phoenix. This DH rig has earned podiums all over the world, and continues to be a favorite on the World Cup circuit. 29″ wheels are certainly becoming more popular in the downhill world, and the Phoenix has joined the trend. New geometry and suspension design were built with the input of Pivot’s Factory Racing Team.

The Phoenix has 190mm of rear travel with 203mm of upfront movement provided by a Fox Factory 40. This build of the Phoenix has Shimano Saint components for absolute bomb-proof riding. DT Swiss FR 560 rims and 350 hubs provide all the reliability you need for racing on the World Cup circuit (or just hitting your local bike park). There are absolutely no holds barred here. This is a bike made for getting from the top of the mountain to the bottom as fast as humanly possible (and maybe faster). 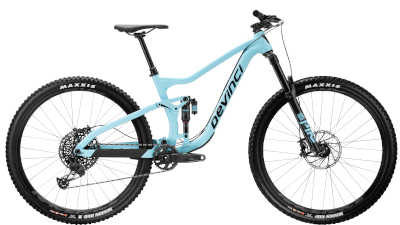 Devinci has been making the Troy for a while, and it just keeps getting better. It now comes with a SRAM GX Eagle 12-speed groupset, G2 RS four-piston brakes, Race Face wheels, and other components that you won’t often find specced on an aluminum bike at this price. It’s just a great deal for a solid bike.

The RockShox Pike Select+ fork isn’t the top-of-the-line Pike, but you still get the great build quality of the Pike name with 150mm of travel. RockShox suspension in the back provides another 140mm, putting this in the mid-to-long-travel trail world. The Troy also has clearance for tires up to 29 x 2.6″, so you can go to almost-plus-size territory with your tires. It gives the Devinci and even more sure-footed feel.