Mountain Weekly News picks for the best mountain bikes of 2020. 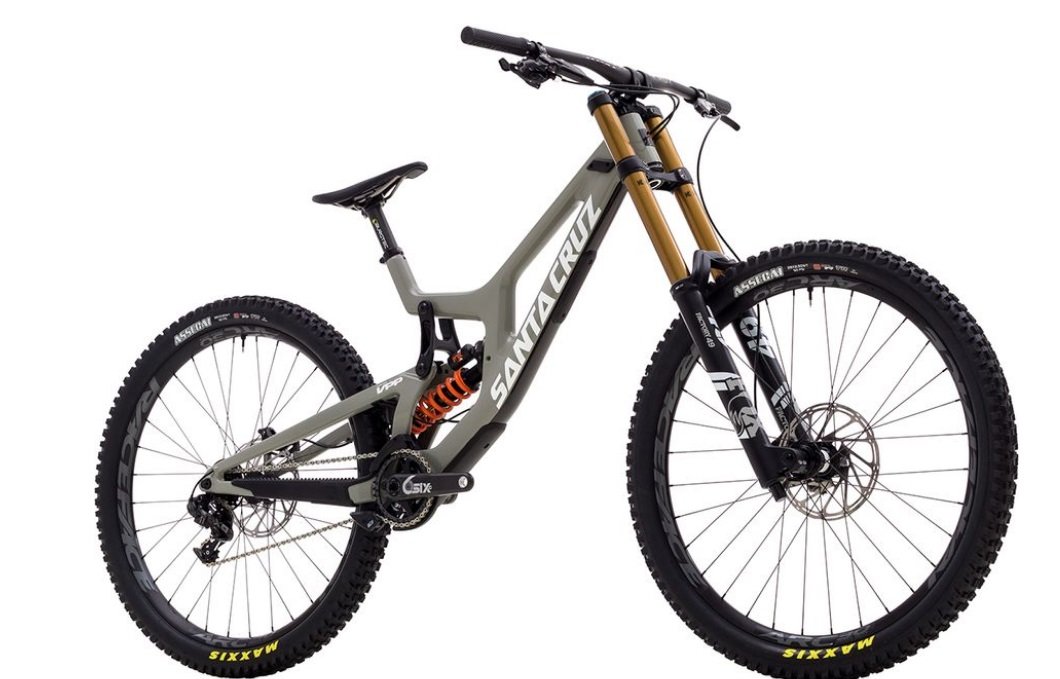 The mountain bike world has gone enduro. Everyone wants to climb and descend. But don’t worry—there are still some downhill holdouts. And the Santa Cruz V10 is one of them. Full carbon frame. SRAM X01 build kit. Fox Factory shocks with 215mm and 203mm of travel. Everything you’d expect from a downhill rig.

This bike is not for climbing. It’s not for enduro. It’s for getting from the top of the hill to the bottom as fast as humanly possible. In that way, it’s old-school. But there are some modern touches, too. This is a 29er, for example. And the 800mm carbon handlebar is on-trend with modern bikes. The Ergon titanium-railed saddle gives a nod to modern comfort sensibilities, too. 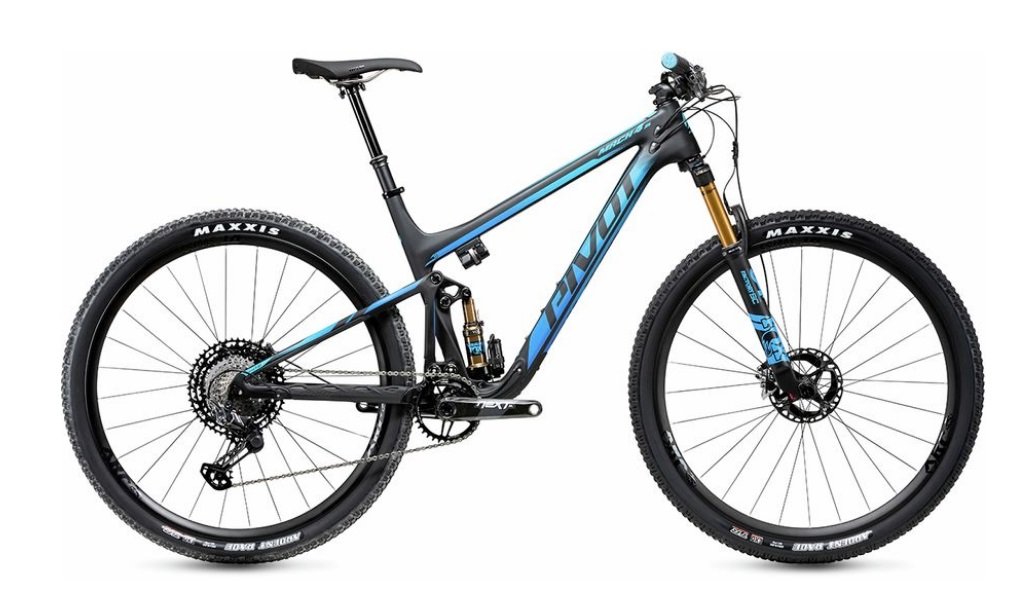 Ready to have your mind blown? This is one of the best new 2020 trail bikes and here’s why. The over-$10,000 version of the Pivo Mach 4 SL includes electronics that measure the trail 1000 times per second and adjust your suspension within three milliseconds to better suit your conditions. Not only that, but an accelerometer knows when you’re pointed downhill.   When you’re pointed over 6º down, your shocks stay in full open.

It’s an entirely new way to ride. And because Live Valve defaults to the “closed” position, it goes back to a firm, cross-country-friendly setup when you’re on in the bumps. Combine all of that with an ultralight frame, 100mm of rear travel, a 120mm fork, and a Shimano XTR build kit, and you have a bike that’s out to set speed records. Pivot mountain bike prices are higher than the competition and for good reason, this Pivot Mack 4 model is one of their best trail mountain bikes that have been built to date. One of the best cross country mountain bikes of the year. 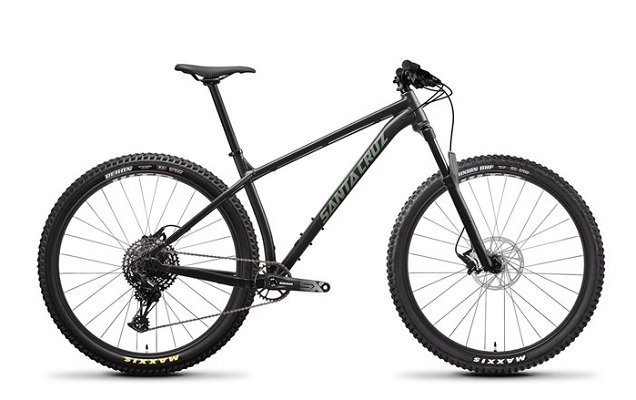 The Chameleon has been around a long time, but it’s still adapting. Its new carbon frame is lighter than ever before, and it retains the playful geometry that the bike is known for. You can run 29″ or 27.5+ wheels on this version, too. You can even run it as a singlespeed. Keep it ultralight or use the mounting points for bikepacking.

In short, there’s nothing the Chameleon can’t do. And this version’s carbon frame and SRAM GX Eagle build kit mean you can tackle all the adventures you want. One of the best all mountain bikes for 2020 on the list. The short stem, wide bars, 120mm fork, and 67º head angle give you modern trail touches without sacrificing any versatility. 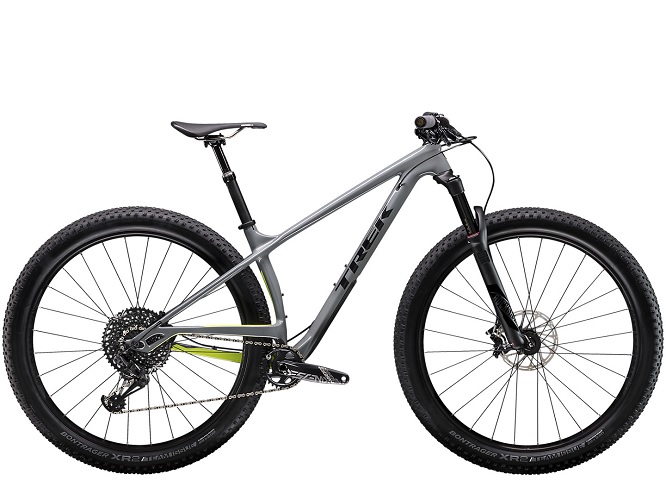 Trek has made an absolute steamroller of a hardtail in the Stache. Not many brands have stepped up to the 29+ level, but Trek nailed it with this one. It’s hard to grasp just how big the wheels and tires on this bike are until you see one in person. It’s impressive. And that gives you all the benefits of both worlds: great rollover for obstacles and lots of grip for technical terrain.

The 9.7 is Trek’s highest-caliber version of the Stache: a OCLV Mountain Carbon Frame, adjustable rear thru-axle, asymmetrical chainstays for a shorter wheelbase, and a RockShox Pike Select Plus fork make this a bike that’s made for destroying trails with its with 120mm of travel. It’s not like anything you’ve ridden before, but it’s a hell of a lot of fun. 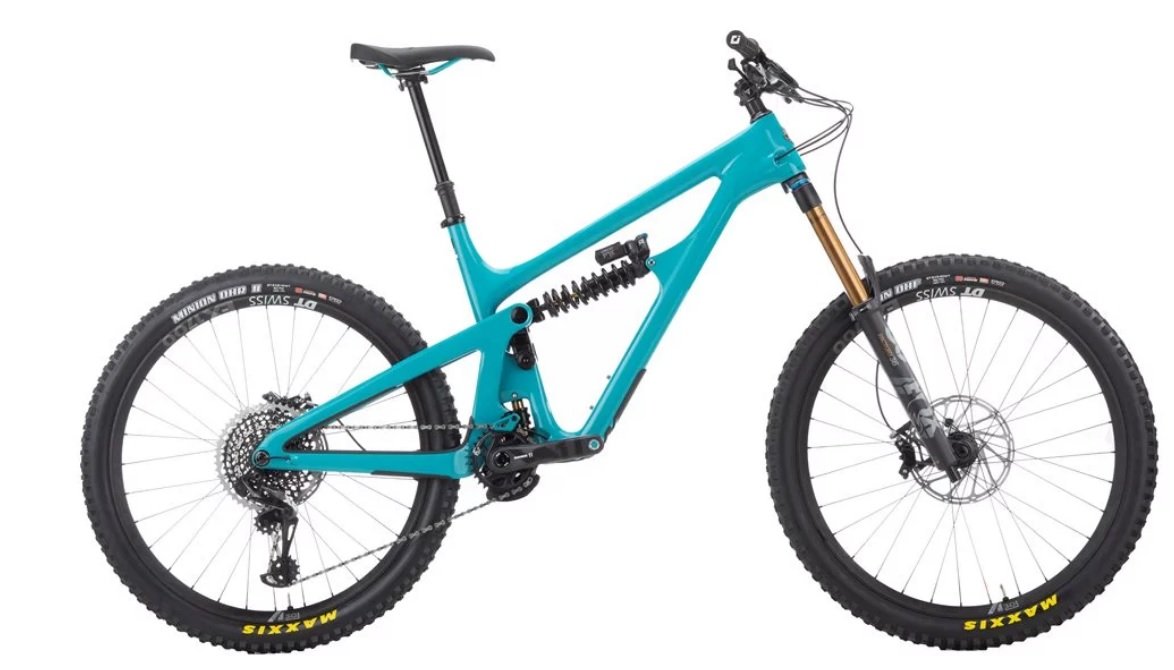 Yeti redesigned the SB165 to create a modern trail/enduro slayer. It’s built around a 165mm rear suspension and a massive 180mm fork. The coil spring on the back gives you good progressive ramp-up over bumps big and small. The 27.5″ wheels add stiffness and maneuverability. And it’s super slack: the head tube is 63.5º.

In short, the SB165 is built for one thing: slaying monster descents. One of the best trail bikes out there. But it can climb, too—the Turq carbon frame keeps it insanely light. This build kit doesn’t pull any punches, either. SRAM Eagle all around, Fox Factory shocks, and DT Swiss wheels mean you wouldn’t be surprised to see this on the pro circuit. 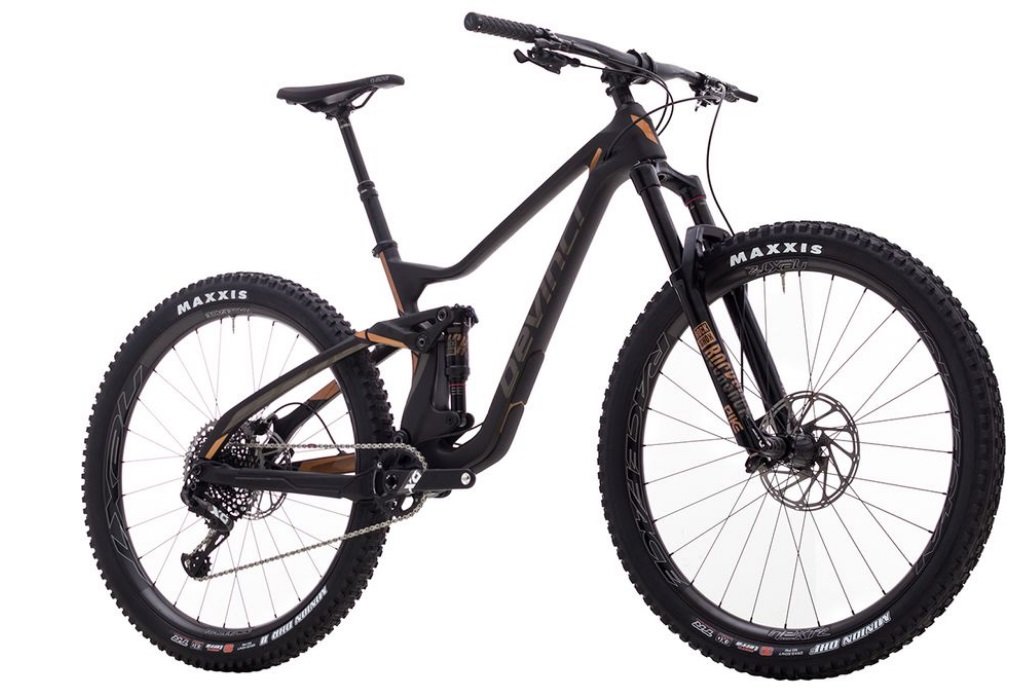 The Troy has been a successful all-mountain bike in Devinci’s lineup for years. But they made a big change this year: you can now get it in a 29″ version. So you get the 140mm rear and 150mm front suspension that’s made the Troy a great versatile bike with bigger, faster wheels. What’s not to love?

Devinci redesigned their Split Pivot system to better handle a wide variety of conditions, and they’ve added Boost 148 rear spacing for added stability. Short chainstays and a 66º head angle give you the perfect combination of playfulness and snappy steering. This bike is made to do it all. 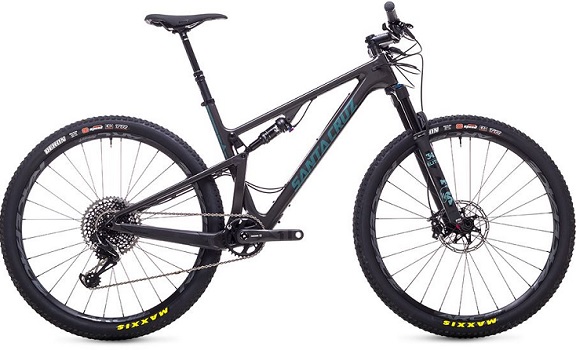 The Blur is built on Santa Cruz’s lightest production frame ever. That should tell you that this bike is a speed machine. It’s not just the weight that helps you get every ounce of speed out of it, though. Dual remote lockouts for the rear shock and the fork help you maximize efficiency on any terrain.

With only 100mm of rear suspension and 110mm upfront, you’re going to get shaken up if you use this for trail riding. But some reviewers say it’s surprisingly versatile on the rough stuff. Its pro-level build kit (largely made of SRAM X01 Eagle) helps turn every ounce of power into motion to get you from Point A to Point B in no time at all. One of the best 100mm cross country mountain bike top-end bikes. 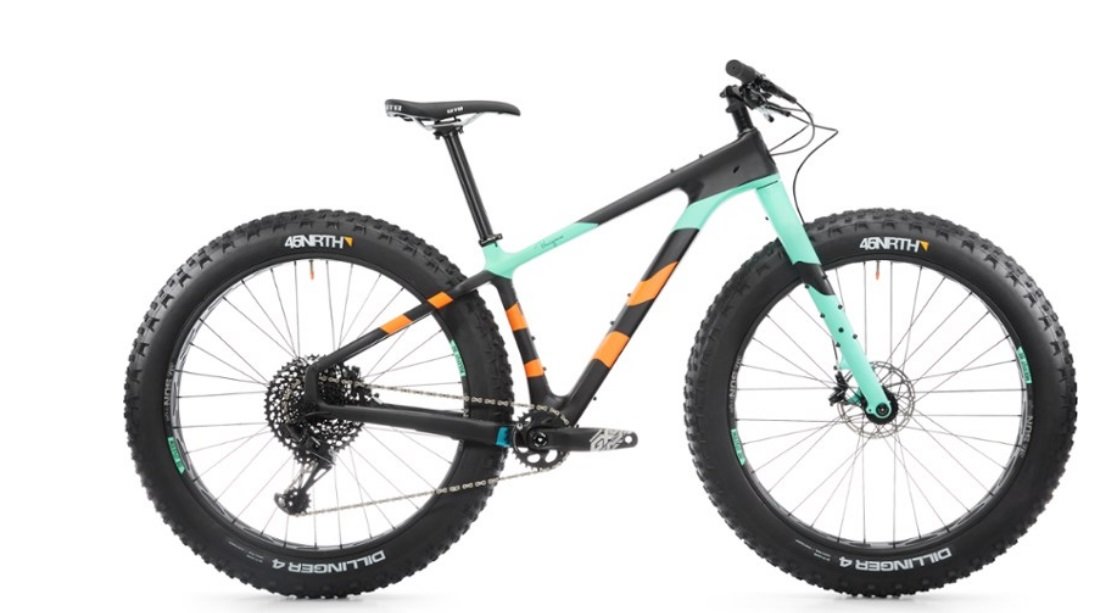 Fat bikes are heavy. But Salsa decided to make the Salsa Beargrease Fatbike less heavy with a carbon frame. It’s lighter and stiffer than the aluminum version but keeps the wide variety of bottle cage and rack/bag mounting options. The carbon fork keeps weight down too, while providing some of the damping that you lose by not speccing a carbon fork.

The Salsa Beargrease Carbon comes packed with high-quality components, too. SRAM GX Eagle gives you a lot of the awesome features of Eagle without the crazy X01 price tag. SUN Ringle hubs and rims support the massive 27.5″ x 3.8″ tires that give you phenomenal traction on just about any terrain. 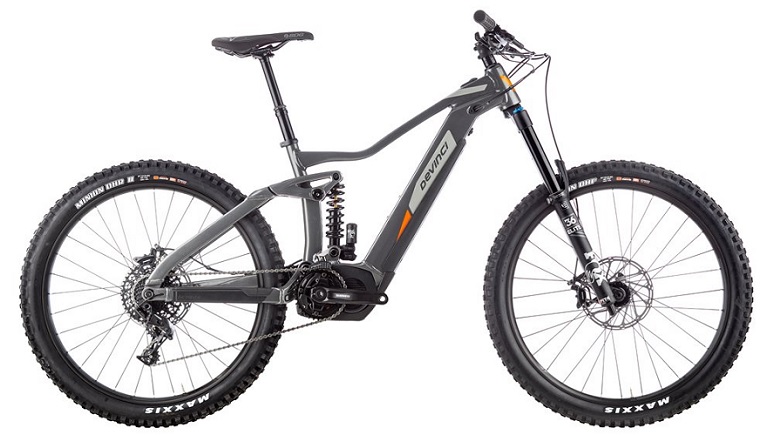 As a descendant of Devinci’s Spartan, the AC has the geometry and travel you need to fly both up the hill and down it. But this enduro steed comes with a Shimano Steps E8020 motor attached for even more uphill oomph. Pedal assist up to 20 mph saves you a ton of energy no matter how steep the climb.

Beyond the motor, this is a solid enduro bike with great specs. 27.5″ wheels are common on enduro bikes because of their versatility. 11 speeds of Shimano XT drivetrain give you the gears you need to tackle any climb. And 170mm of travel on the back paired with 180mm on the front lets you get gnarly. One of the best 2020 enduro mtb bikes in this roundup. 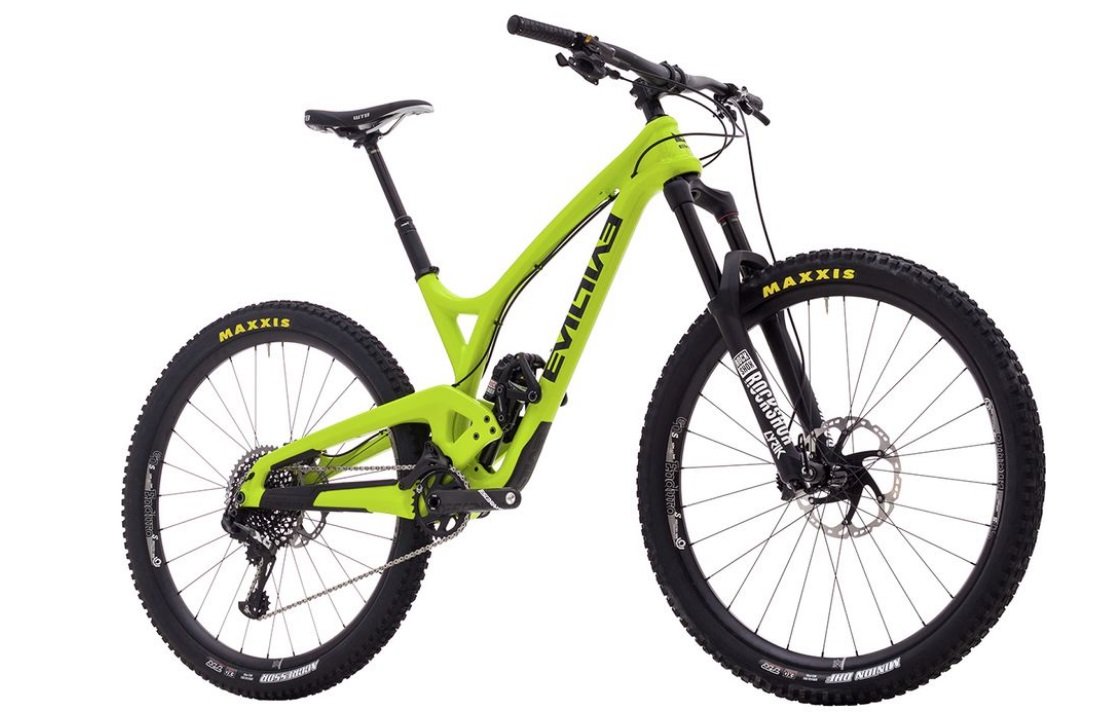 Want big wheels for more speed and better rollover? How about 160mm of rear travel for crushing even the gnarliest trails? Variable geometry with a flip chip? The Wreckoning has it all. Whether you’re racing enduro, hitting the bike park, or just looking for a bike that can handle absolutely anything, The Wreckoning will do it.

Evil has dropped about half a pound from the previous version of this bike, but it still comes with all the things that made it super popular the first time around: an amazing build kit, Dave-Weagle-designed suspension, Boost rear spacing, and a slightly slacker-than-normal 66º headtube angle. Plus that yellow paint job. You’ll never lose this thing on a bike rack at the bottom of the gondola. 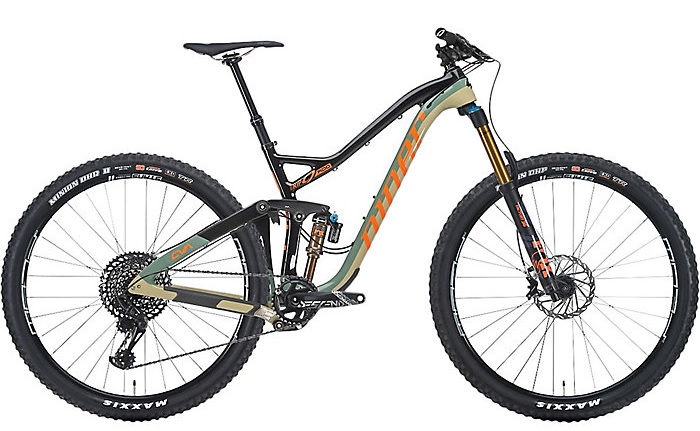 If price is no object, the RIP 9 RDO with a 3-star build could be the ultimate do-it-all machine. The 140mm rear travel might not sound like a whole lot, but the bike is built around it to be as capable as possible. 150mm up front means you can lean into downhills, too.

Like every other company, Niner has put a slacker head tube on their newest bike. In its low setting, the RIP 9 has a 65º head angle. But you can steepen it up with the flip chip. You can also run 27.5+ wheels. And you can run 2.6″ tires on your 29ers. With the right mix of adjustability and a straight-up quality build, there’s little that could stand in the way of this machine.