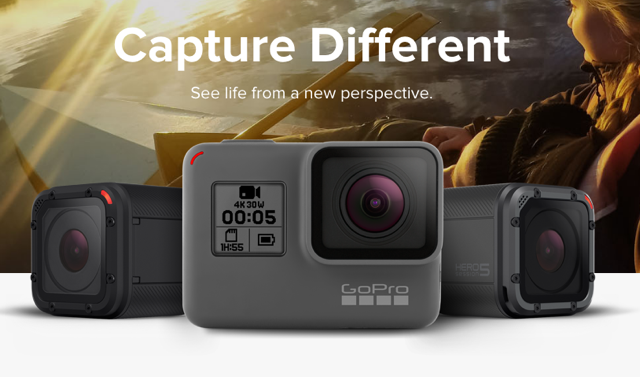 Wondering how to capture your favorite moment in action sports?  Skiing, surfing, snowboarding and everything in between?  We have been testing outdoor video cameras and pov cameras for the outdoors for some time.  Below are some of the best video cameras we have tested over the years.

A 360 camera does pretty much just what it sounds like- it shoots everything around you.  360 degrees of footage. The Rylo 360 Camera has the best combination of software and sturdy quality hardware. The video stabilization software allows for industry-leading smooth video free of wobbles and shakiness.  The 360’ camera hardware captures everything.  The editing software enables you to choose and re-frame the shot you want after the footage has been captured. The Rylo shoots [UPDATE – 4K capture has now been upgraded to 5.8K capture] which in a flat video is fairly good.  For a 360, it’s not quite enough to make the footage super crisp.  On a large monitor, you will notice. The Rylo has a removable battery.  It is not waterproof so you will need some sort of a case for outdoor winter use!

If you are looking to capture a lot of footage but don’t want to spend inordinate amounts of time setting up your shots, this is the camera for you.  This over capture/reframe style camera gives the user the freedom to choose their frame and their point of view after the fact. Facebook, Instagram, Flickr, and YouTube all support 360 video making sharing these fantastical images easy. The ideal accessory for the 360 camera user is a virtual reality headset.  So whether you are out backcountry skiing in a silent and pastoral wonderland or building a kicker to throw big tricks, the Rylo 360 Camera can bring home the images and let you really feel as though you are right back there.  If you have relatives who simply don’t get it or don’t have the faculties to get there- this is the premier piece of equipment to share your life. 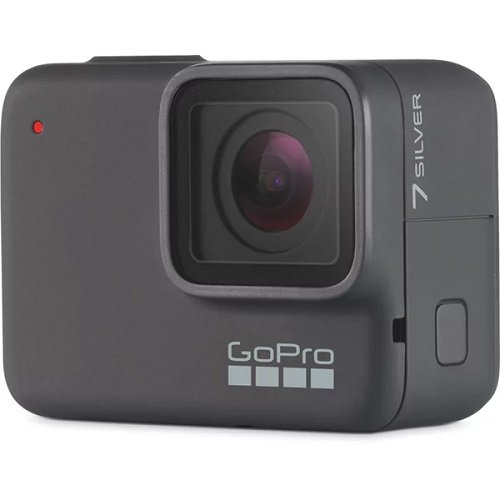 Moving into familiar territory, GoPro introduced the GoPro Hero7 line in 2018. All of the Hero7 line cameras offer a waterproof protective case, an LCD touch screen, video stabilization, voice command capability, wifi capability, and Bluetooth compatibility.  The Silver (mid-range model sandwiched between the Black (top) and the White) sports a 10 MP photo, 15 frames/second burst feature and 2x slo-mo video. All of these features are accessible with a simple finger tap on the LCD screen.  The GoPro Hero Silver also has GPS; this allows you to track your altitude, speed, distance and elevation gain.  You can actually tag your footage with these stats.

So who uses this camera?  If you are looking to get into the high-end video production biz or enhance your social media presence- you are going to want the features of the GoPro Hero7 Black. 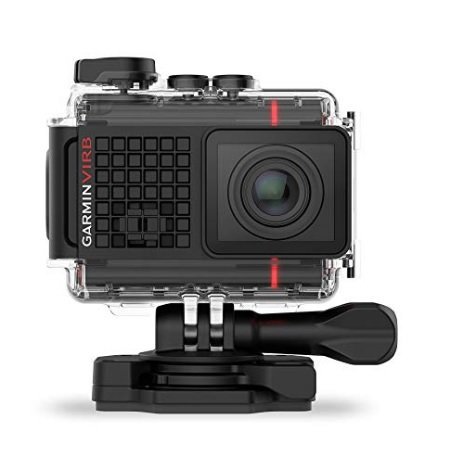 Garmin is known for their GPS devices and this camera is everything you would expect from a Garmin GPS. The Garmin Virb Ultra is equipped with a GPS, Altimeter, and accelerometer. It can record information such as speed, route and distance traveled. Like other Garmin devices, the Virb can be paired with Garmin cycling computers and other accessories to record heart rate and bike cadence, which makes it an outstanding tool for training and exercise.

The Garmin Virb Ultra Camera shoots in full 1080p HD at 30 frames per second as well as a number of higher frame rates at lower resolutions. The battery lasts for up to three hours of constant recording. Its 1.4-inch display takes the guesswork out of framing your shot and provides the instant gratification of in-camera playback. 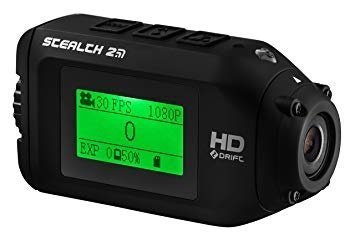 Simply amazing, I feel the video quality out of the box shoots at a higher level than the competition. 1080p, 720p & WVGA The details in the snow were vivid, each turn you could literally see chunks of powder snow being captured by the Drift Stealth 2 Camera. I still love my GoPro but feel Drift will be making a huge name in the industry in the years to come. With the ability to shoot in the following modes: 25 / 30 / 50 / 60fps in 720p or 25 / 30fps in 1080p

At times I would literally take my helmet off to make sure the camera was still attached. It was not from fear of the clips breaking but because I was unable to feel the added weight while wearing the unit. Everyone that has seen me wearing the Drift HD170 Stealth camera has commented on just how slick and especially lightweight the camera is.

The beauty of these cameras is they’re re-inventing the way news is captured. You can even spin the lens 360 degrees. It will only be a matter of time before we see motion pictures made entirely on small consumer wearable digital video cameras. These are exciting times to be a consumer of electronics.

In my opinion, someone who has used both the GoPro™ and Contour™, the ATC Chameleon Camera is by far the most versatile and coolest. Certainly, it has its pros and cons but when it comes to just fooling around and filming out on the slopes the Chameleon, naturally, gives you the most angle options. If you’re looking for a more professional look and feel I don’t recommend the Chameleon. It just doesn’t offer the same picture quality as the GoPro™ does. In terms of ease and use, the power slider can be turned on and off with even the bulkiest of gloves. There are no buttons, and out of the box, the Chameleon doesn’t need any waterproof case. The durable plastic shell is splash proof. I dropped it in the snow, the lenses fogged up but the camera still worked. However, if you are looking for an underwater adventure Oregon Scientific sells a 100% waterproof case up to 60 meters.

Unlike other camera options on the market today, the Liquid Image Summit Series Video Camera Snow Goggles offer a unique display inside the goggles, visible to the user, which indicates which mode the camera is in and the recording status. Thus eliminating the question, Am I recording, bro? This, coupled with the extremely low profile appearance of the camera, allows the user to discretely slip around the mountain and amongst the crowds without looking like the staff videographer of the local newspaper. Most people I ran into didn’t even know I was recording until I pointed the feature out.

These Liquid Image Goggles performed admirably in the damp conditions at the 2012 Legendary Banked Slalom. Baker did not disappoint with an intermittent mix of rain and wet snow that would challenge any goggle. The only notable difference between the Liquid Image and my stock setup was the weight and the field of view. The weight, or lack thereof, is really amazing considering the battery, camera, and storage built into the goggles. If that mass could be concentrated inwards, towards the face, I feel that the overall distribution and the field of view could be improved. 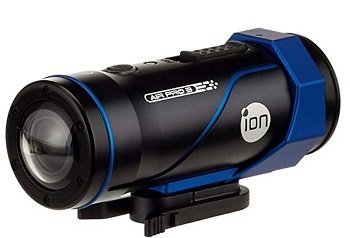 The iON Air Pro 3 is a versatile action camera. It has a variety of features that make capturing high-quality video in various situations easy. The camera is cylindrical with an on-off button and a record switch. There is no screen or display. Vibrations indicate when it has powered on or off, and when recording starts and stops.

Like any good action camera, the Ion Air Pro 3 can record at a variety of high frame rates. It will record 1080p video at 30 or 60 frames per second and 720p at 120, 60, or 30 frames per second. It takes 12-megapixel photos and has single shot, burst, and time-lapse photo settings. All settings must be adjusted using a desktop application or a smartphone app.

It was only a matter of time until Sony entered the POV camera market. The electronics giant has finally jumped into the game, with the compelling Sony HDR-AS15.

The Action Cam follows the camera-and-case design, similar to GoPro, but leans more toward the tube shapes of Contour and ION. While not lending itself to chest-mounted options, overall, I prefer this design. By itself, the HDR-AS15 is light (90g with battery), but in action, the camera is safest when housed in its included waterproof case.

The waterproof case includes the familiar 1/4×20 threaded base, so the camera can be mounted to Sony’s accessories (more on those later) or any standard tripod.