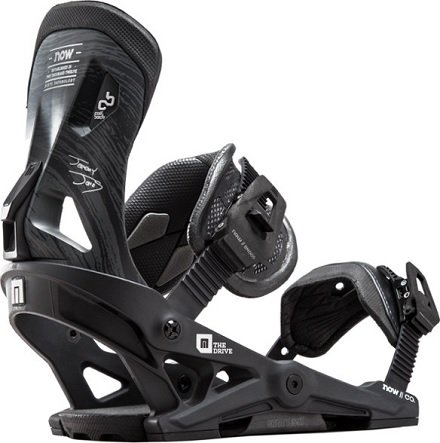 Also on the stiffer side, the Now Drive Bindings are another favorite when it comes to dominant freeride boot huggers. Designed as a collab with big mountain legend Jeremy Jones, these binders are as responsive and intuitive as it gets. They deliver a natural board feel that really put riders in synch with their stick and basically eliminate disruptive chatter. Wildly durable, yet impressively comfortable, Now has upped their game and seriously delivered a product that refuses to back down from any line. Shift your ride game into overdrive with these primo pieces from Now. One of the top-rated all-mountain snowboard bindings out there. 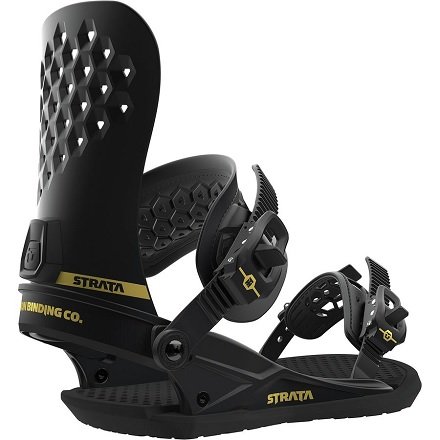 If you’re the type of rider who doesn’t limit themselves to one part of the mountain, then the Union Strata Bindings are for you. These bad boys straight up get it done in the streets, backcountry, and resorts in your backyard, below the equator, and overseas. No matter where you ride, the Strata it up to the challenge. Their flex is somewhere between medium and stiff, and they feature a futuristic baseplate that is lighter and stronger than anything else out there. It’s risky to hang the word “flawless” out there, but screw it, we’re doing it with these all-mountain beauties.

While they have long been solid players in the snowboard industry, Arbor is relatively new to the binding scene. They picked up some buzz last year, and the Arbor Hemlock bindings have returned for a second season with a sequel that’s even better than the original. This is hands down our favorite binding for the price. At an entry level cost, it’s actually a premiere piece of equipment that delivers advanced level performance to satisfy the demands of even the more gnarly riders. Arbor slaps an impressive warranty on these things because they aren’t going to fall apart on you. Catering to the all-mountain freestyle breed, the Hemlock features an outsole diffuser and X-Drive baseplate that allows the board maximum natural flex with tons of shock absorption. Lightweight, comfortable, and durable, you can’t go wrong with the Hemlock bindings from Arbor. 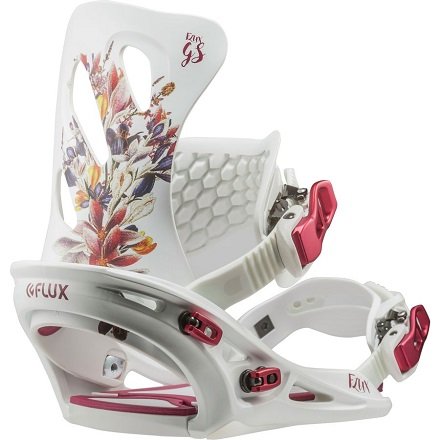 Don’t worry ladies, as there are some lovely options out there this year for you as well. If you’re looking for a do-it-all snowboard binding that has been crafted with every little detail accounted for, your search ends with the Flux GS Women’s Snowboard Bindings. A medium stiffness along with a fine balance of responsiveness and playfulness enables you to charge hard from peak to park. The highback and baseplate have both been designed specifically for women, and the Waffle Strap is all amped up on comfort, yet ideal for energy transfer. Everything about these bindings is on point, from the FooTon Footbed that won’t succumb to snow buildup to the Tool-less Levers that allow you to make adjustments without asking a liftie for a screwdriver. Even the mounting disc is perfect because it works with every hold pattern!  All this adds up to a purely phenomenal binding that will let you flex some serious attitude all across the mountain.

Respect the connection between you and your board. Complete your kit with a set of the best snowboard bindings of 2018-2019 to undoubtedly ascend to a new echelon of shred bliss. 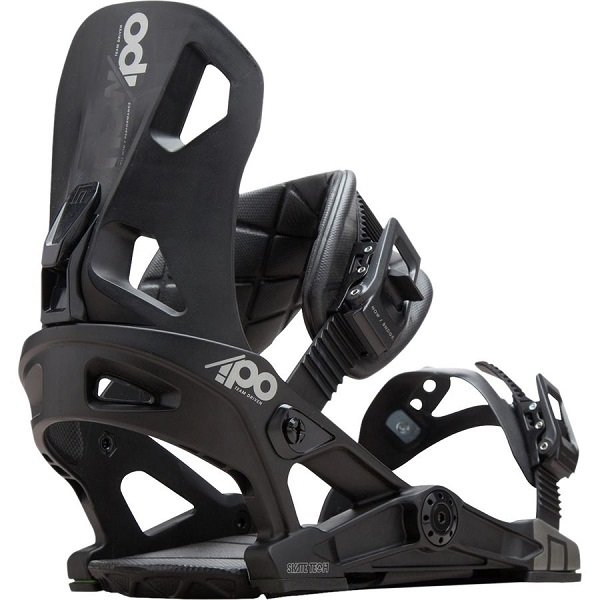 Now you are in the know.  Seriously though, there’s nothing on the market that has the features found on the of the NOW IPO Binding.  What sets now apart from everyone else is the use of a hinge in the middle of the binding.  What this does is allow a snowboard to ride like a skateboard with trucks, or better yet a surfboard.  These bindings are in a league of there own. 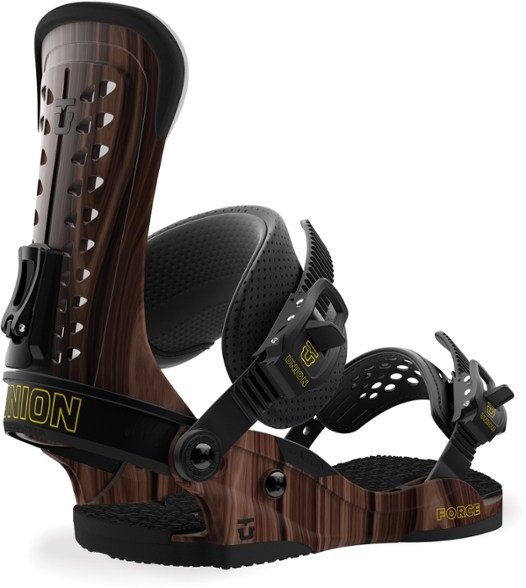 It’s a Union, need we say more?  Union has been making some of the best fitting, most comfortable snowboard bindings on the market for years.  The Union Force Binding features a flexible high back that moves with you, a bomber aluminum heel cup that can take a beating.  This is the sort of bindings dudes that ride 100 days will appreciate for its durability and playfulness from day 1. For the price, it will be hard to find anything comparable. 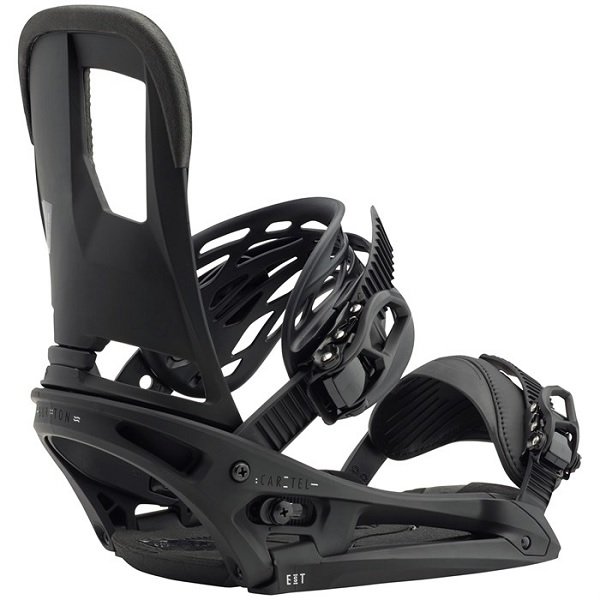 The best selling binding in the Burton Snowboards line and possibly of all time is the Burton Cartel Snowboard Binding.  Just like a gang, the Cartel Binding hits hard with its black colorway, a medium flex high-back, that works wonders for stomping landings and the super comfy new Hammockstrap, lightweight ankle straps.  Toss in some Re:Flex cushioning in the footbeds, and you may just find yourself riding bell to bell on the Cartel Binding. The Cartel ranks as one of the best Burton Bindings the brand has ever produced, and one of their most popular sellers. 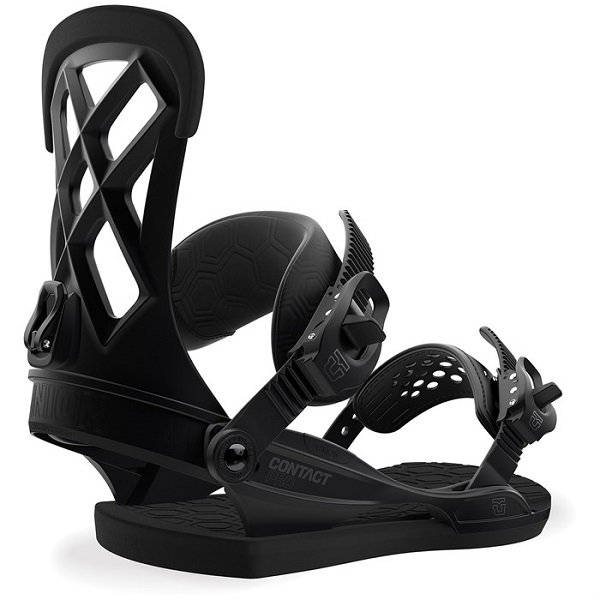 Gigi Rüf, ever heard of him? The Union Contact binding has been around for a while and although it was originally designed by a freestyle backcounty rider, as of late it’s been adopted as a favorite among park riders. With minimal binding-to-board contact point’s this binding offers a true natural flex, as in there will be times you forget it’s actually attached to the board as you slide across boxes and rails. This is a super soft and flexible binding for someone that loves buttering don the mountain, butter your muffin. 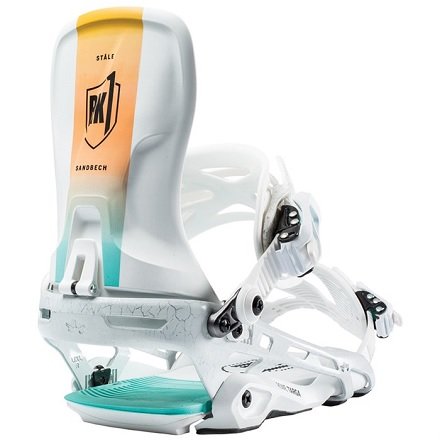 Vegetarians look elsewhere because the Rome Targa Bindings are composed of nothing but strong bones and tough meat. These stiff, aggressive freeride bindings are not to be underestimated as they are ideal for the most technical terrain in any conditions. And while they are very much a bomber set, they aren’t about to sacrifice any comfort. What really puts the Targa over the edge is the massive amount of customization options. You can really dial these things in pretty much every way imaginable for the perfect fit and maximum performance. For those looking to rip off a piece of the burliest part of the mountain, gear up with the Targa Bindings from Rome. 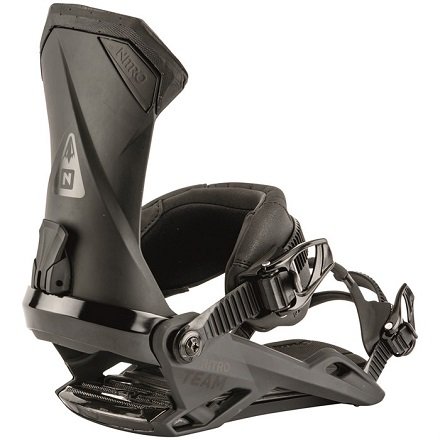 Back again to take a victory lap, the Nitro Team Bindings are a favorite that even a whole slew of pros love. With a full EVA asym highback that cups your boot, an airbag of sorts in the heel to reduce weight and amplify comfort, and plush ankle straps that evenly distribute pressure, these connectors are wickedly comfy. But don’t let all that luxury lure you into thinking they weren’t built to rip. They are super responsive without being too stiff. Plus, they’ve even got a grippy Vibram rubber toe strap, some of our favorite buckles, and the crazy convenient angle lock function of the mini disk that snaps into place. We really find it difficult to stop gushing about all the sweet features and performance of this team favorite.