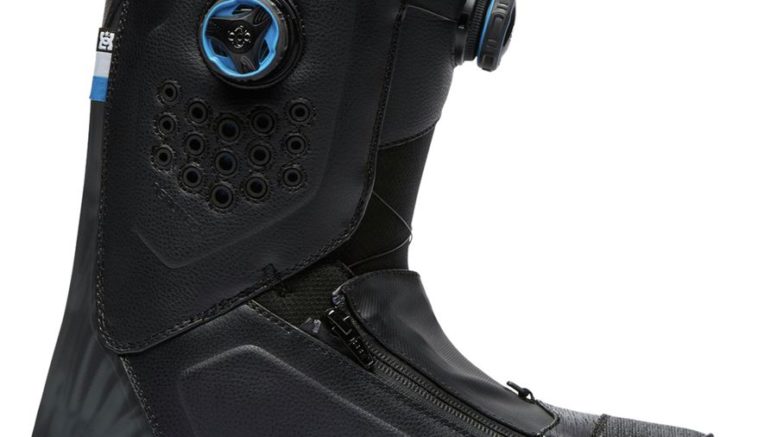 So what makes the DC Travis Rice Snowboard Boots special? For one the asymmetrical outsole, yeah you heard it right this boot is shaped differently on the outside edge, allowing you to reduce ever having to deal with dreaded toe and heel drag. Talk about freaking progressive, leave it to a shoe company to reinvigorate snowboarding, kudos DC.

The DC Travis Rice Boots are a solid stable hard-charging snowboard boot with a 4 out of 5 flex on the stiffness scale, my only wish is that this came in laces. However, if you like BOA the Travis Rice boot has double BOA closures.

Clearly Travis spends a ton of time in his boots, guessing this came from his girlfriend. Either way, it really works to regulate your foot temps, its the perfect solution, not to warm, not too cold its actually just right!!

Travis Rice is from Wyoming which is known for cowboy powder, and you better have a boot that will hold up to shoot Corbett’s Couloir in freezing temps.

Not only is this one of the sexiest looking snowboard boots on the market it’s possibly the most high-performance snowboard boot ever made. I would definitely recommend this boot for any intermediate to advanced level ride, someone that likes to charge hard and better yet for that guy that is planning on taking some sleds laps and helicopter trips in the near future. And even better it easily doubles as a pair of splitboard boots for your next tour.

Travis Rice was has been voted the best snowboarder in the world many times over. Is he the best? Yeah, I would say so. His sponsor’s list is a distinguished list of great brands, and one of the better sponsors T-Rice holds down is DC. Travis charges hard, especially in the legendary terrain here in the Tetons. We’re huge supporters of Travis Rice and what he and the crew over at DC are doing as of late. At $399.99 the DC Travis Rice Boots are one of the most top of the line snowboard boots ever made.