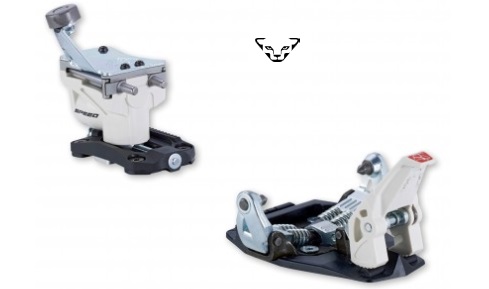 I have been playing with the Dynafit Speed Turn Binding for about 10 months since it came out. In Europe and the US, the price is the cheapest among Dynafit-style tech bindings, making it the obvious choice for first-time tourers looking to drop weight and the budget-minded.

The Dynafit TLT Speed Radical is negligibly different in weight from the Speed Radical and comes with the same Guide leashes which significantly reduce weight compared to brakes and can be used as needed to reduce lost skis. Starting at the toe, the differences begin. The toe is a 5-hole classic Dynafit pattern begun by the first TLTs and continued into the Vertical series.

For all-around mounts, it is narrower than the 4-hole Speed Radical but offers more versatility for all but the fattest boards. Under the metal toe plate is a nice plastic riser with crampon mount, which gives a little more upright skiing position.

The big improvements come in the heel piece. Dynafit takes an updated Speed Radical heel plate— with better anti-rotation that the initial Radical series— and adds a bombproof steel “volcano” for the heel rise. This allows for three positions that won’t break in the field like the Speed Radical lifters occasionally do. Turning the heel to engage different heights is as easy as of the other Dynafit bindings, and it feels solid in all positions.

The 25mm of adjustment of other Dynafit bindings is maintained, as is the approximately 4mm setback from boot heel, making for a versatile and familiar level of adjustability and much more than the original 4mm adjustment of the Speed Classic.

On snow, the binding performs like any good Dynafit, with the added confidence of an all-metal volcano. The toe lever works great and feels much like the Radical lever it is based on. I haven’t had a chance to ski the toes on big boards, but on K2 Gotbacks and skinnier skis, the toes handle just fine. There is a nice mount for ski crampons should you need it, and metal loops for leashes mean keeping your skis with you isn’t hard in the case of a fall.

No changes have been made to the pin design on the Dynafit TLT speed turn to ease entry, but the simplified volcano is less likely to get jammed with snow and hasn’t broken yet. At DIN 4-10, this is still a touring binding but can handle some challenging terrain if you’re on the lighter end. Though with such lightweight and bomber feeling while climbing, you may appreciate ups more than downs.

For charging or if you need brakes, I would still recommend grabbing a pair of Dynafit Speed Turn Bindings ($288.95) for the bombproof volcanoes, swapping these risers onto a burlier heel piece, and voila, you have an ideal binding and a not-quite pair of Speed Radical bindings for some true touring.

Ben is an entrepreneur, adventurer, and weekend warrior based out of Denver. He loves to blend biking, skiing, and running into long days in the mountains.