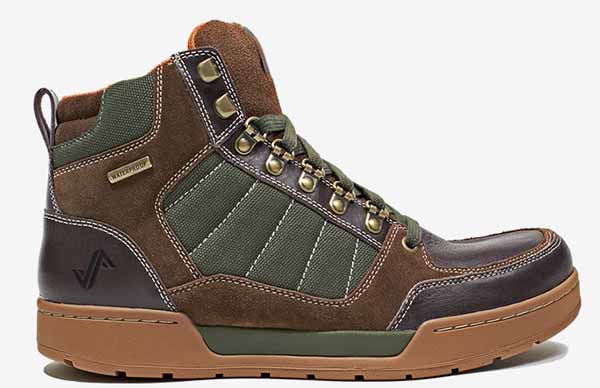 Is it a boot, a shoe or a high top, regardless of how you classify them, the Forsake Hiker Boot is a must-have for any mountain man. Forsake saw an opportunity to create a crossover piece of footwear that wears like a skate shoe while performing like a pair of hiking boots.

I broke these Foresake Boots in while spending a few days walking around a trade show over the summer. Find out how my feet and these boots held up :

Normally such a bold move would guarantee incredible foot pain, however, after logging over 10 miles on the show floor I was taken back by just how comfortable my feet felt in the Forsake Hikers without any break-in period.

The Brown/Green colorway is similar to the shades and colors found in the mountains which makes the Forsake Hiker feel that much more natural. And if you’re looking to be steezy while styling your boots to your clothes, you’re in luck as the Forsake Hiker can work with just about anything.

Cons: My only gripe with these boots is they are really only made for 3 seasons. I have tried to wear them in the snow and ice with not much success. Normally I find myself sure-footed when walking on icy hard-packed roads (15 years of experience) however the traction found on the bottom of the boots needs to be deeper as the only part of the soul that was making contact with the ground was on the sides of the boot.

Pros: The Forsake Hikers are built to last, you can rest assured that you won’t pull the laces through the boots thanks in part to the metal lacing loops. Great colors for fall hunting!

Aside from winter, the Forsake Hiker Boots ($130) performed well on and off the trail. The combo of leather and suede was surprisingly breathable and kept my feet dry most of the time. It’s rare to find a pair of boots that look and feel like sneakers, Forsake has changed the game!

Be the first to comment on "Forsake Hiker Walking Boot Review"