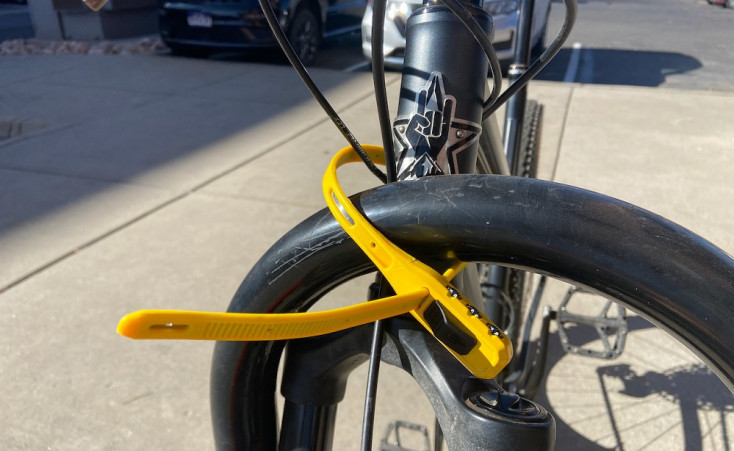 When buying a bike lock, cyclists are faced with a conundrum: truly secure locks aren’t very portable. Chain and U-locks are the only things that will keep your bike safe from a dedicated thief (one without an angle grinder, anyway).

Many locks provide compromises: they’re a bit more portable and a bit less secure. Hiplok decided to go the other direction with their Z Lok security tie: make it as light and portable as possible, while providing just enough security to keep someone from grabbing your bike while you grab a coffee.

Let’s be totally clear here: the Z Lok security tie doesn’t protect your bike from a committed bike thief. There’s a steel core inside the plastic band, so you can’t get through it with wire cutters. But someone with a few minutes and a sturdier tool could cut the Z Lok.

However, this lock isn’t meant to protect your bike for hours. It’s meant to be just secure enough to prevent someone from grabbing your bike and riding off. That’s why it’s called a “security tie” instead of a lock. (Hiplok actually describes is at as a “secured, reusable zip tie.”)

The lock feels sturdy and will be enough to prevent bike thieves looking for a quick score while you’re in the coffee shop or hitting a restroom on a ride.

It also works well if you want to add some front-wheel protection to your larger lock, lock your bike to your car rack, secure your helmet, or lock up other outdoor gear.

Again, all of these are “convenience” locking situations. The Z Lok will secure your stuff against thieves looking for a quick grab.

With that out of the way, let’s talk about this security tie’s main strength: portability.

You can stick these ties in a large pocket and forget that they’re there. Or keep one in a frame bag or backpack. You can wear them around your wrist or secure them around your frame and you almost won’t notice that you have them at all.

That’s the point of the Z Lok: maximum portability. It’s easy to find a U-lock that weighs three pounds or more. Some chain locks can actually break the ten-pound mark. Those kinds of locks will stop a hacksaw and more.

But most of the time, you don’t need to stop a hacksaw. You just need something to prevent thieves from snatching your bike while they walk by. That’s what the Z Lok does.

The Z Lok security tie offers two options: one with a key and one with a three-dial combination. Let’s take a look at the keyed option first.

The first thing to notice about the keyed Z Lok is that it’s smaller than the combo option. Not just the locking mechanism, either—the band is actually a bit thinner. That’s why this svelte lock is less than a third of the weight of its combo brother.

Does that smaller band make the lock less secure? Probably not. If something can get through this one, it’ll get through the slightly larger one just as well.

The only worry I have about the key lock is that the same key opens every Z Lok. What are the chances that someone who wants to steal your bike also has a Z Lok and is carrying their key with them at just the moment that you lock your ride up? Almost zero. But it still feels a bit weird.

The simple key mechanism also makes the lock feel like it could be opened with a couple stiff wires if someone knows what they’re doing (though I haven’t tested this).

Now let’s take a look at the combo version.

The combination lock has three small dials for a custom combination. Just push the button, choose your combination, and you’re good to go. This one is notably heavier, at 70 grams, but that’s still next to nothing in the lock world.

The larger locking mechanism and wider band make this one feel more secure.

The only thing I noticed about the combination version is that the last wheel clicks into place a bit. So if someone were to guess the first two digits, it wouldn’t be hard to figure out the third.

Is that a real security threat? Almost certainly not. Just something I noticed while testing out the security tie.

Price: next to nothing, frankly

So how much will these convenient ties set you back? Here’s the full price breakdown:

As long as you know what you’re getting, the Z Lok security tie is a fantastic choice. It won’t keep your bike safe from a determined bike thief. But it’ll prevent a quick grab while you’re away for a few minutes. And it’s small enough to keep in a pocket.

Because of the universal key, though, I’d really recommend using the combo version. It still weighs 2.5 ounces, so you’ll barely notice it in a jersey pocket, but it doesn’t have the universal key of the keyed version. Unless you need the absolute smallest bike lock you can find (or have too many three-digit combinations to remember already), there’s no reason to go with the keyed option over the combination.

If you don’t need to protect yourself from bandits with bolt cutters, the Z Lok security tie is a solid choice that protects your bike with just a few extra ounces in your jersey pocket.