We’ve compiled a list of the top snowboard boots, giving you something to think about so you know that your feet will be happy, comfortable and dry while spending a long day out snowboarding. Laces, BOA or Speedlace becomes the question, some boots are easier to get on while others will stay tighter throughout the day.  Dialing in your boots should be the first part of your snowboard gear. 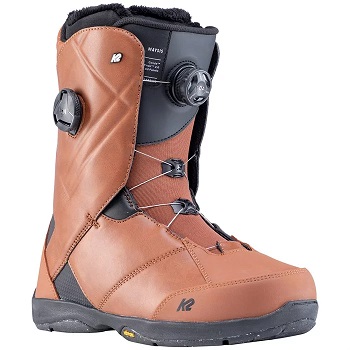 K2 Maysis Snowboard Boot offers double BOA controls for that perfect fit we have all been longing for. The Boa Conda System locks in your heel, while the top controls the upper part of the boot.  One thing we notice with boots is they tend to get soft from side to side.  K2 has a solution for that, Endo 2.0 construction.  What this does simply is it helps the boot from breakdown as quickly.

The K2 Maysis is one of the only boots you can actually wear over the course of a few seasons without feeling like the boot has gone to shit. This construction does come with one hiccup, the boot is on the stiffer side of all the boots on this list. 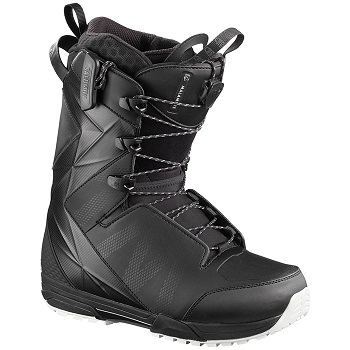 This was the first snowboard boot I ever owned, thanks mom! And to see it still at the top of the list of best snowboard boots some 15+ years later really says something about these boots. One of the stiffer snowboard boots on this list that really locks your heel into place.  Heel lift sucks in snowboard boots, if you have struggled in the past, the Malamutes will secure your heel in place throughout the entire day, guaranteed.

Salomon’s Powerlace system is fun and easy to use, just pull up and walla the boot is tightened. This is a great alternative for snowboarders accustomed to using traditional laces that not ready to make the jump to BOA.  Do yourself a favor, get these boots heat molded before you hit the slopes to really dial in the fit. 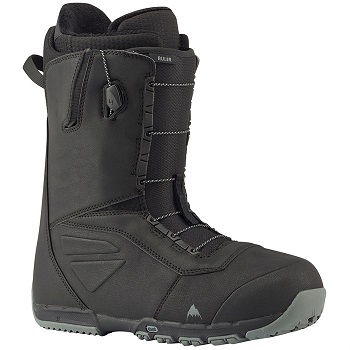 Who doesn’t love BURTON? This year slap these sick looking snowboard boots on, and let ‘er rip! The Burton Ruler boots are ultra-versatile and feature a medium flex ideal for those with a riding style that includes transitions. Whether you are sliding down piles of puffy powder or setting up for your second lap in the park, the Burton Ruler Snowboard Boots are ready to take it on! Made with the exclusive Imprint™ 2 Liner, the Burton Ruler can be customized with heat for the ultimate in comfort. Then, the reinforced soles stay strong underfoot to absorb any impact you experience during aggressive riding. Don’t worry about your boots this season, these are some really good snowboard boots. Just let the Burton Ruler focus on your feet, so you can progress your riding. One of the most comfortable snowboard boots for men on this list, right out of the box. 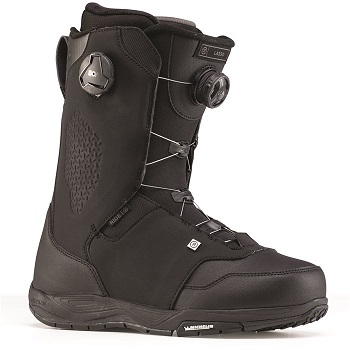 Another one of the double BOA boots to make this list of best snowboards boots goes to Ride Snowboards.  The Ride Lasso Boots are pretty freaking rad with their Michelin Tire soles.  Walking on ice becomes fun with this sort of rubber traction and grip.  No kidding. The Lasso is a little bit of a stiffer boot so the big mountain crowd will surely appreciate this one, especially if you find yourself scrambling with your snowboard boots on.

In all honesty, this was the only boot on the list I have not tried.  Paging Ride??????? Hello Ride???? All kidding aside this is one of the lighter snowboard boots on the market with a Very small footprint.  If you find yourself in-between Medium and Large bindings sizes, (likely a size 10 or so) get this boot and down size your bindings. 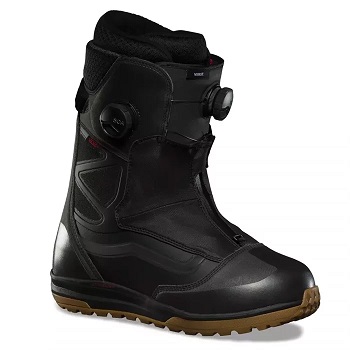 The snowboard boot I found myself wearing the most last season for testing was the Vans Verse Boot.  This boot saw over 30 days of use and because it’s a Vans is still holding strong.  And I haven’t even had to use the stiffness yet, which Vans includes with the boots for ultimate customization.

Vans and BOA are crushing it together as of late, this boot features two distinct lacing zones that work to hold your feet in place. The front of the boot even comes with a zipper, ala the mountaineer boots.  If you find yourself playing in deep snow. 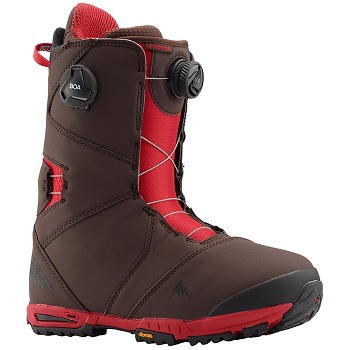 Another BOA boot on the list comes to us from Burton Snowboards.  The Burton Photon Boot comes with a Vibram sole which is rad for crushing boot packs, walking on slick parking lots and for really gripping onto the bottom of your binding.  Designed for riders with cold feet the Vibram helps to deflect the cold as does the Sleeping Bag heat-reflective foil built into the bottom of the boots.  This would be a great pair of boots for someone working in ski school or standing around at the bottom of the lifts for hours on end.

When it comes to locking your feet in place, Burton like a lot of the other brands here opts for BOA.  The Burton Photon BOA has 2 BOA controls that allow you to adjust the top and bottom parts of the boot separately. Park laps in the morning, backcountry laps in the afternoon, the Burton Photon Boot does it all.