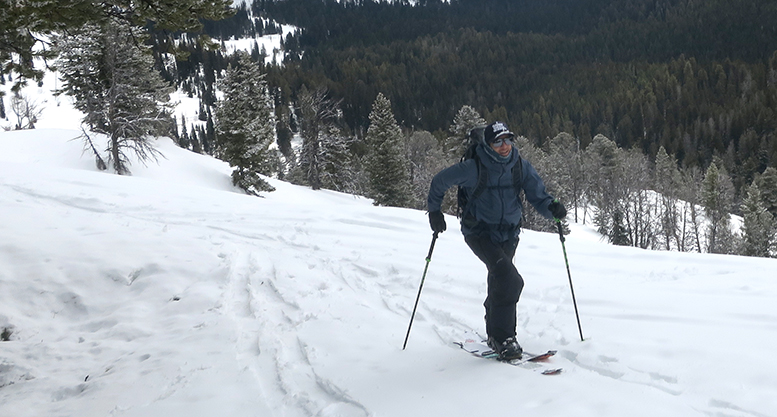 The Never Summer Atom Splitboard rides especially well in sub-par snow.  Never Summer has been known to make some of the best boards for having fun on the descent, the question becomes how does this splitboard perform on the uptrack? 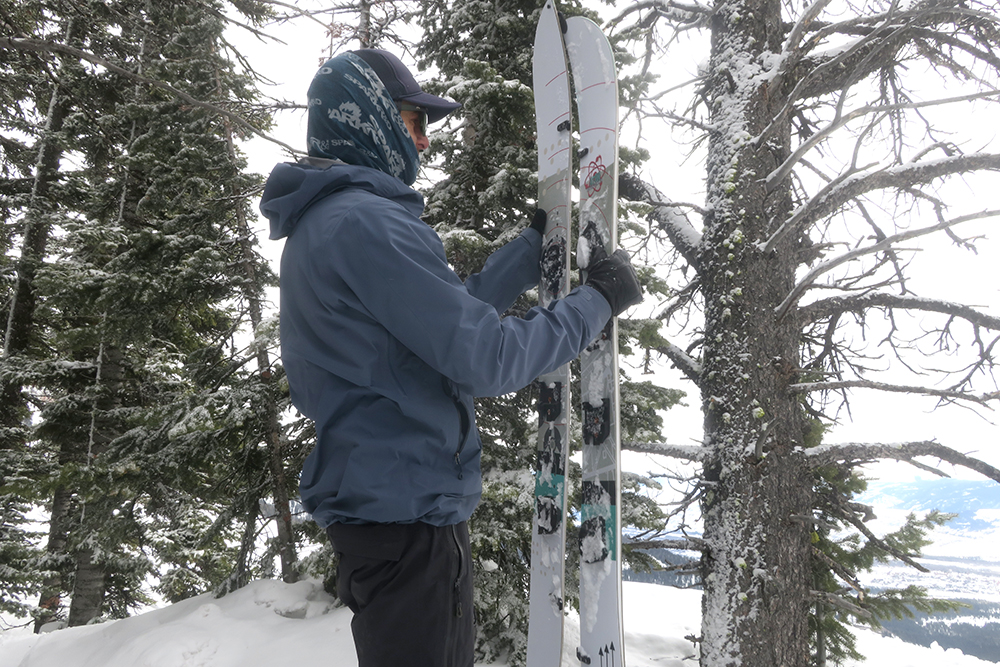 One of the cool things about the Never Summer Atom Splitboard is the use of Phantom Hooks that help to bring both halves of the board together for a tight fit.  It’s actually sort of hard to get these off at times, which is honestly a better problem to have than the reverse which happens frequently with the Karakoram clips a lot of other manufacturers are using.

Never Summer claims to be using a new profile on the shape of the Atom Splitboard.  According to Never Summer is features the “new split specific Rocker Camber Profile”.  I couldn’t find the shape or any info on their website about the new profile. This profile kicks ass going downhill with just enough rocker between the feet giving sick float and lots of freestyle fun. 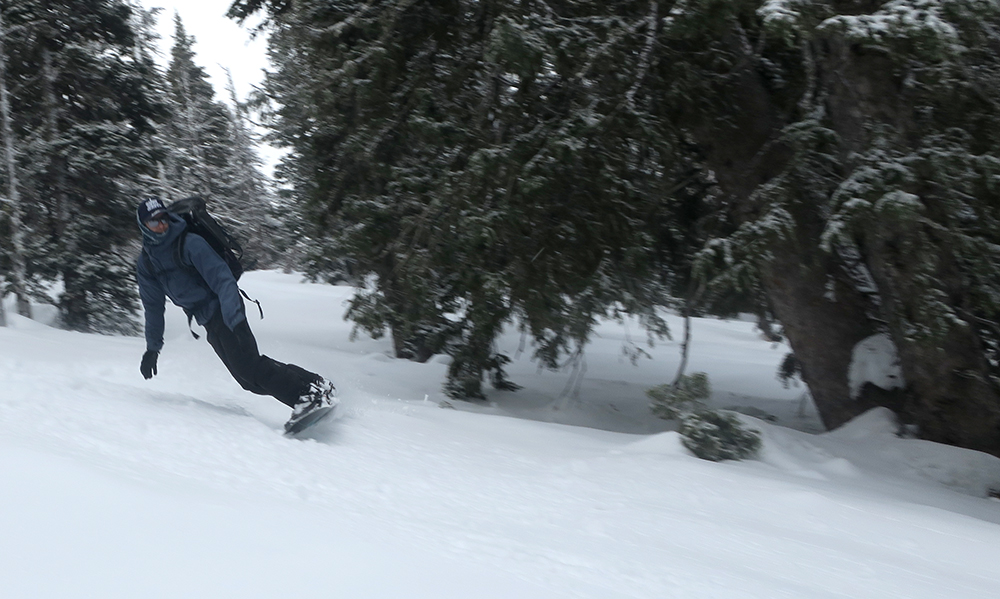 Once mounted together the Never Summer Atom Splitboard is a powerhouse of a board.  Turns effortlessly link together and the Atom Split just seems to want to roll from edge to edge. Which is the way we like to typically ride splitboards.

However… (Without offending anyone at Never Summer too much) building a board with rocker profile between your feet on a splitboard is not the most efficient when touring. The “new” profile does seem to have a little bit less rocker in the middle of the board however it’s still there and very noticeable.  It’s the sort of rocker that allows a board to spin in circles.

Put the board on a flat table and give it a spin in ride mode this shows the playful rocker for going downhill. Now, do the same in tour mode and the board’s skis spin, something you really don’t want happening while free-heeling touring.

So this is where we are at with splitboarding as a whole.  Boards rip going downhill and suffer on the uptrack.  With that being said if you’re the one putting in the skin track, a little bit of rocker underfoot isn’t that big of a deal.

Using rocker splitboard is like riding the Union Bindings Expedition Splitboard Bindings you may opt for the performance on the way down while the tradeoff is sacrificing on the way uphill. 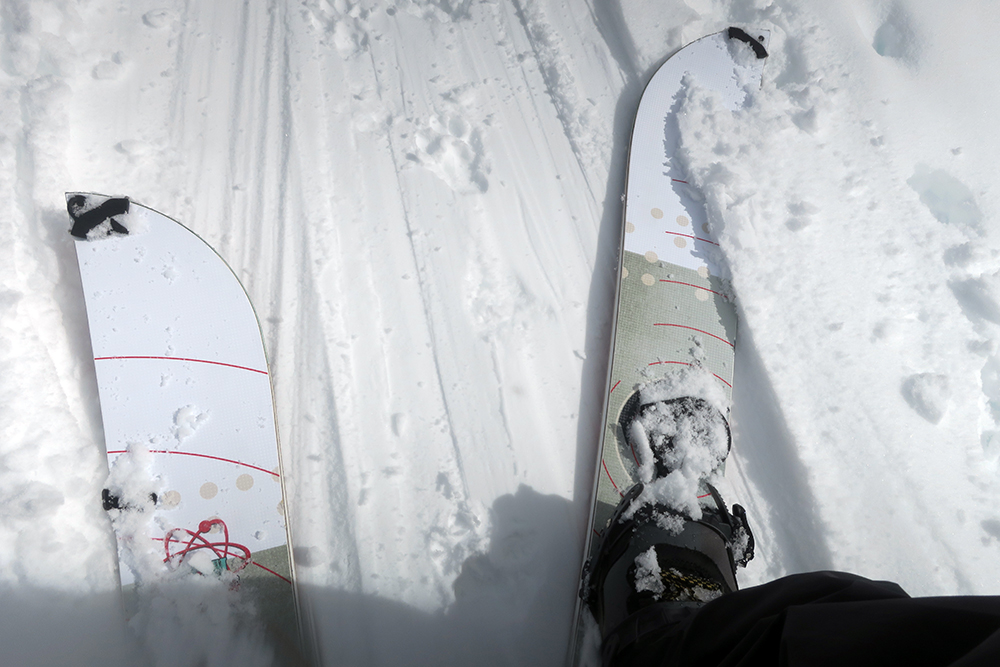 You can see the right ski spinning off the skin track.

Would you rather be on a stiff camber board that tours well on the way up and rides clunky on the down?  Or is there a middle ground here somewhere?

Surely a company like Never Summer can help us all meet in the middle.  Even though the brand does not sell cambered boards anymore (they had a spendy lawsuit with Mervin) they just can’t seem to let go of the RC profile. What’s weird is they sort of secretly producing Never Summer boards for World Boards in Bozeman, MT. that are cambered and all the Academy Snowboards are also cambered being built in the same Never Summer factory in Denver, CO.

I really enjoy riding the Never Summer Atom Splitboard ($1059.99) going downhill.  Out of all the Never Summer Splitboards I have tested the new touring profile seems to work the best, but it’s far from perfect. On powder days this profile works, on slick skin tracks you’re going to be bummed sliding around over the boards rocker over and over throughout the day.

REI was recently at the OR tradeshow talking to another brand about how consumers need a splitboard that performs as well on the up as it does on the down.

One day this industry will start to pay attention to what consumers are asking for. Or maybe what reviewers are saying…