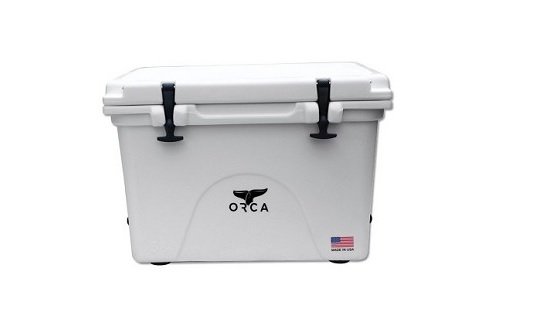 I’ve had the opportunity to use the ORCA 58-Quart Cooler on several occasions so far. Though I haven’t really “roughed it” with the cooler yet, I have taken it on a couple of early-fall camping trips. As far as durability goes, the ORCA has held up way better than most coolers I have used in the past. I am notoriously rough on my camping equipment and the ORCA has shrugged off every beating I have thrown at it.

My favorite thing about the ORCHA 58 Quart Cooler is its size. It is the perfect size cooler for nearly every occasion. It’s small enough to lug down to the beach for a picnic but big enough to handle a three-day weekend camping trip with friends. I’ve used it for tailgating (go Seahawks!) and it held enough beer to get my crew sufficiently soused.

The genius of the ORCA Cooler is its durable design. It is a seriously tough little guy. The cooler is roto-molded and employs a lid gasket to ensure a perfect seal. It is one of the most rugged coolers in the game.

The cooler’s integrated insulation means that it keeps things damn cold. I was surprised at just how cold the ORCA Cooler remained even after a long weekend of camping. ORCA claims their cooler will keep your food cold and fresh for up to ten days, I haven’t yet tested in past four.

Additional features of the ORCA Cooler that are worth mentioning include its extendable flex-grip handles and a cargo net attachment for added storage. The handles make it easy to carry the cooler by yourself or with a partner. An easy-flow drainage spout makes emptying out the cooler an easy task.

ORCA takes things one step further by donating a portion of every ORCA Cooler sale to charities and organizations throughout the United States. For example, purchasing the cooler in the pink colorway benefits the Susan G. Komen Foundation’s breast cancer research.

ORCA, short for the Outdoor Recreation Company of America, is one of the top up-and-coming manufacturers of premium outdoors products and equipment in the United States. The company was founded by partners Jim Ford and Cliff Walker, long-time hunters, anglers, and all-around outdoors enthusiasts, and has used only American-made components in all of its products since the beginning.

There isn’t much more to say about the ORCA 58-Quart Cooler ($449) than it kicks ass. It’s as solid as a rock and will hold up for the long haul. Plus, it looks great and is available in a variety of colors. I’ve been extremely happy with mine so far and I’m sure you will be too!

Be the first to comment on "ORCA 58 Quart Cooler Review"