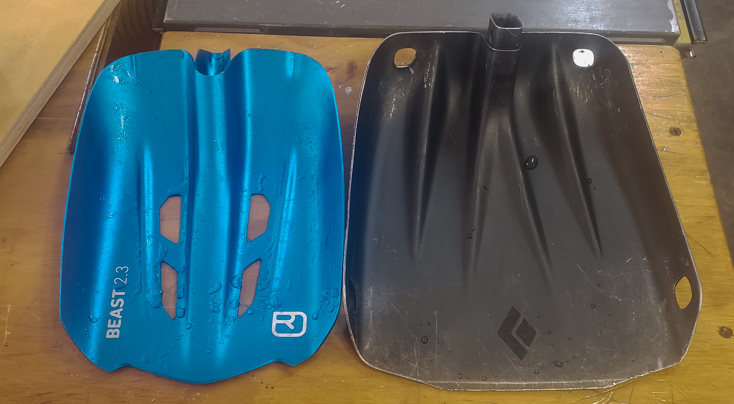 We have experienced an exceptionally sketchy snowpack in the mountains surrounding Jackson Hole, Wyoming this spring, so I have gotten to put my new Ortovox Beast Avalanche Shovel to the test.  Fortunately I haven’t had to dig any friends out of avy debris, but after one close call with a big slide two weeks ago and a tragic avalanche fatality in the Tetons 10 days ago I have used the Beast to dig a dozen snow stability test pits in search of the surprisingly widespread and persistent weak layer which has caught so many experienced backcountry travellers off guard recently.

The Ortovox Beast 2.3 Shovel has served me well while hunting for safe snow and quality spring turns amidst sketchy avy conditions.

The Beast shovel feels sturdy despite its exceptionally light weight 580g (20.4oz).  It deploys quickly and reliably, and has an idiotproof design.  It is impossible to put it together incorrectly, and the telescoping handle is well designed in several ways.  With other avy shovels I own the telescoping handle can be overcollapsed and then has a tendency to get stuck in that overcollapsed configuration: that is not an issue with the Ortovox Beast Shovel thanks to its foolproof design.  This is an important consideration since most of us would probably be freaking out if a friend had just gotten buried by an avalanche.

For a shovel with a relatively small (2.3L) shovel blade volume — compared to my Black Diamond Evac 7 Shovel — I sure can move a lot of snow quickly with the Beast.  The blade has a sharp leading edge and three “teeth” — a big central tooth and two fangs on the sides — which cut through firm snow easily.  I have experimented with the Beast on old crusty avy debris and it slices through dense refrozen snow better than a standard shovel with a flat front with it’s sharp sturdy cutting edge.

This Ortovox Shovel packs down quickly and reliably, and thanks to its relatively small blade, offset grip, and overall collapsed handle length it easily fits inside even my smallest 20L backcountry touring backpack.  When extended the telescoping handle provides a comfortable overall length for digging pits and through debris.

The Beast shovel is specifically designed for avalanche safety.  It wouldn’t be my first choice for digging out a stuck snowmobile or building a snow shelter while winter camping but it would get the job done. It is a perfect shovel for lift access backcountry shredding and backcountry ski touring adventures where you need to bring a shovel but don’t plan on digging more than the occasional test pit.  Alongside a larger plastic scoop shovel I keep strapped to my snowmobile the Ortovox Beast has become the shovel I choose to carry on my everyday backcountry adventures as it’s so pack friendly.  The Ortovox Beast 2.3 ($65.00) is a high quality shovel you can depend on in the backcountry. Highly recommended and worth the price.