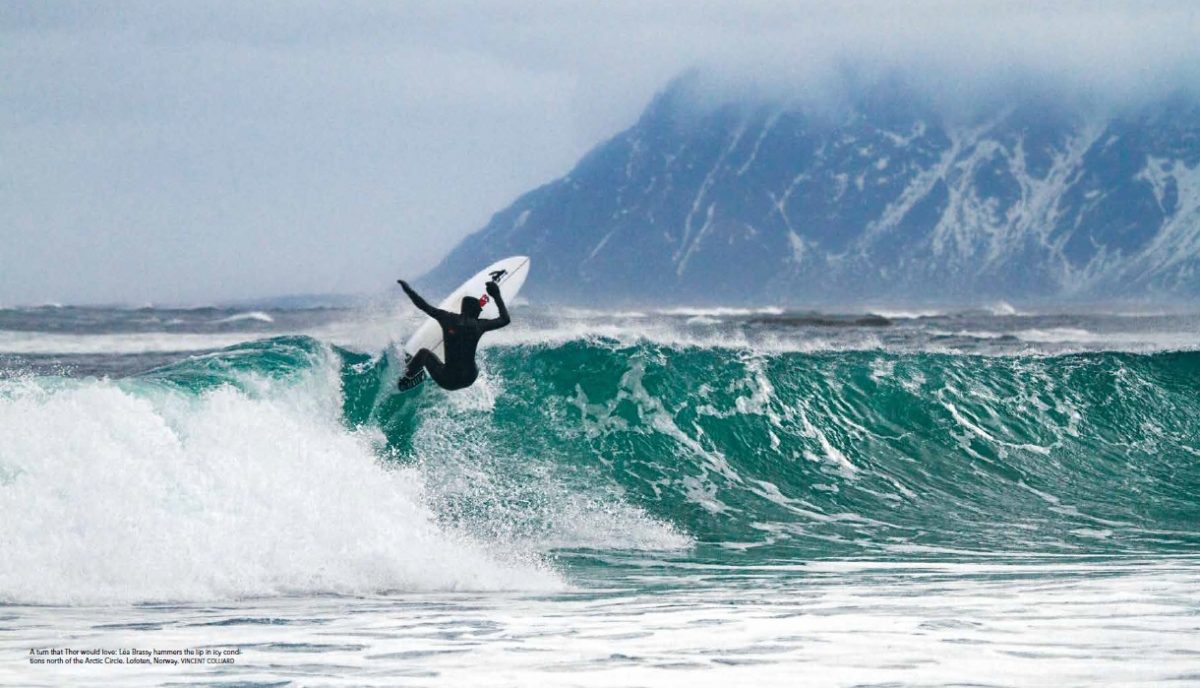 The Patagonia Yulex Wetsuits are every bit as insulating as the neoprene ones (if not actually more so), evidenced by Patagonia surfers ripping everywhere from AK to the Pacific coast of South America. And while Patagucci has a reputation for being on the higher end of the price spectrum, in this case, you’re getting a high-performance wetsuit that’s comparable pricewise with other high-performance suits but with the added benefit of cutting CO2 emissions during production by about 80% (and pulling support from petroleum and limestone extraction businesses). If only you could say the same thing about your brand new pick-up.

“Surfers and wetsuit manufacturers — including Patagonia — have relied on neoprene for years, despite the fact that it’s a nonrenewable, petroleum-based material with an energy-intensive manufacturing process,” says Hub Hubbard, Patagonia’s wetsuit development manager. “Through our partnership with Yulex we’ve invested in a plant-based game-changer and built it into our entire fullsuit line.”

Yes, of course, Patagonia. Yvon Chouinard’s little hobby outdoor gear gig that constantly breaks the accepted rules of business operation and continues to kill it. Decades ago, when the closest we got to discussing human impact on the environment was rambling on about how air conditioners were putting a hole in the ozone layer and chanting “Reduce-reuse-recycle” paper products, Yvon and company switched to 100% organic cotton. Since then the great mountain/water man himself has bought large swaths in Patagonia to conserve for future generations while his company has launched ad campaigns telling people to buy old consignment Patagonia gear and minimize their global impact, among countless conservation-minded messages and innovations.

A few years back, they first started working with Yulex to see what could be done about the nasty process of making wetsuits, a product practically defined by its own quick obsolescence (especially if you leave it in a pile in the back of your car after that dawn patrol and forget to shake it out for a few days). That first step was a wetsuit made of 60% plant-based rubber and 40% Neoprene, a product they launched in 2014. Now they’ve done it, a wetsuit completely free of neoprene. Using rubber sourced from hevea trees on reclaimed farmland in Guatemala developed in partnership with the Forest Stewardship Council and certified by the Rainforest Alliance, they’ve eschewed petroleum-based neoprene entirely, cutting down substantially on waste and emissions.

So what does this all mean? Basically, Patagonia has again put their money where their mouths are and invested in highly-transparent, organic products despite the fact that they cost more. Such eco-friendly solutions have become Patagonia’s signature.

Of course, they did have to add some synthetic rubber and likely there are some gnarly glues in there. And there’s still the holy grail, figuring out some way to create a wetsuit that’s fully biodegradable (I couldn’t find any info on sun degradation of these Yulex suits so seemingly we’re still left with a rubber product that will breakdown into plastic pellets and add to that Pacific plastic gyre and that North Atlantic plastic trash patch), though Patagonia has been encouraging the recycling of its products since the beginning of time (just send your old wetsuit back to them — and neoprene can be broken down in a process called vulcanization, which I think is basically replicating a volcano and melting the wetsuits back to nothing, so there are ways to prevent your wettie from becoming another broken-down piece of rubber that will poison the earth long after you’re dead).

In the end, this means Patagonia has yet again led the way in not only helping us get out and play at our best, but it has also made a BIG step to ensure our kids and grandkids can do the same. And they’ve presented an opportunity for all of us tree-hugging “love of earth and sun and water” outdoor athletes to fight the hypocrisy presented by our impact on the very environment we purport to love.

So check out their Yulex line and pick up a new eco-friendlier wettie for this upcoming La Nina winter. You’re not off the hook for trying to save the world, of course. But at least you can substantial moves to do so without sacrificing your performance or giving up that most blessed of communion with the sea. Patagonia Yulex Wetsuits R2, R3 &R4 ($548.95) front-zip styles.

Wetsuits are key for our enjoyment of the ocean, especially for those of us who surf or dive or spearfish. If the ocean dies, so too does our need for wetsuits. This is the kind of dilemma that smacks us in the face if we enjoy outdoor activities. A lot of the gear we use to fight off the elements is made from, or at the very least contains, oil-based energy-intensive plastics and rubbers. These all involve the extraction of oil from the ground, the manipulation of that oil via chemical processes to make raw materials, and the creation of other chemicals to augment the chemical properties of the plastics or rubbers. It’s just foul.

Be the first to comment on "Patagonia Yulex Review"