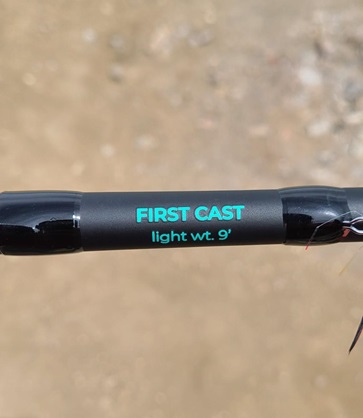 I was sent the Reyr First Cast Collapsible Fly Rod. To be fair, I was very skeptical at first as a collapsible fly rod would seem that there would be a lot of issues and lack of performance, but I was wrong. The Reyr First Cast 4wt Rod out of the box felt much sturdier then I was anticipating.

Once I got it all rigged up, and started casting it feels like a slower action 4 wt, allowing time for the rod to load while casting.  I did notice that there is a distance limit while casting, the slight adjustment the line goes through from the reel to inside the rod, kills your line speed and that is one thing that on the Reyr website mentioned. Reyr vs Tenkara? This is a great collapsible rod that is supposed to cast more then a Tenkara Rod, yet less then a standard rod.

I view the Reyr First Class Rod as being a small pond and creek style rod. It will handle bigger fish with some finesse, but you shouldn’t be expecting to double haul 80 Ft. with this.

The reel is super smooth and is a great combo on this rod. It looks great and has a great drag system!

They do have a 6wt version that would be great to test out and see the casting distance of but this 4wt can handle a good amount!

Great for camping, fishing and adventuring in the rocky mountains, and beyond. If you’re looking for a lightweight rod that you can throw in your backpack for some high alpine creeks and smaller lakes this summer, look no further than the Reyr First Cast ($279.99)

You'll find Cody on the rivers or on the peaks. Thing is, you won't be able to find him at all....