A life lived well is one spent experiencing everything the world has to offer. Travel’s a huge part of that and as an amateur adventure and travel professional I’ve easily spent the equivalent of 2 months on adventures away from home over the last year, from Central America to Europe to both U.S. coasts and points in between. My ancient, go-to travel pack had just recently begun to crumble. Which made this a perfect time for an upgrade to RMU’s BRFCS pack, an absurdly well-dialed blend of style, capacity, and portability for the voyager who travels hard. 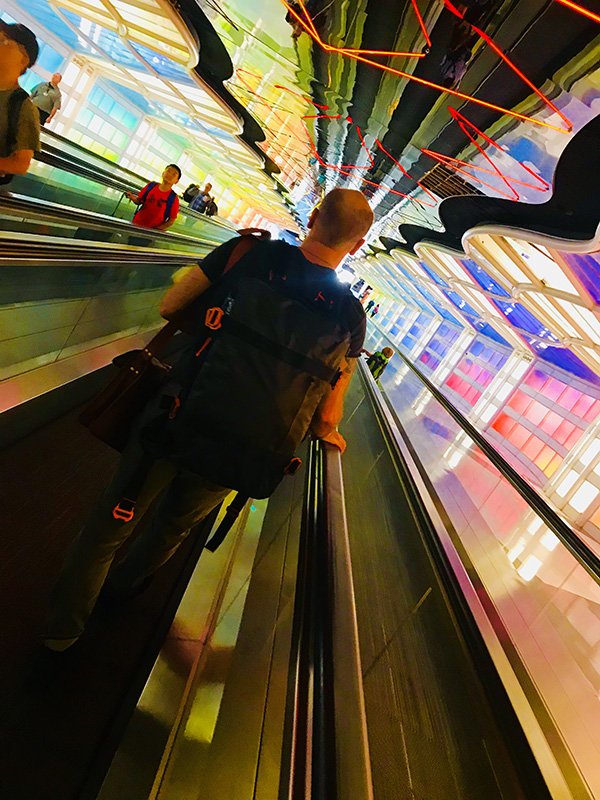 Before I even put my clothes and travel detritus in it, before I examined the zippers and the straps and everything, my first reaction? That’s a sick travel bag. Sleek black 630D Nylon face fabric w/carbonate PU coating to withstand baggage handlers and inclement weather, getting shoved under the luggage in the trunk or onto the floor of taxis. In my case, I dropped a whole beer on it about a day into one recent trip and calmly wiped it away (try doing that with your weave fabric roller). The orange nylon lining and the capacity expansion skirt sets the black piece off for some extra flare. And the aluminum buckles connected to nylon seatbelt webbing means you could literally be in (or riding atop) a derailed train and you won’t lose your pack, while at the same time matching your mountain adventure metal and rugged materials style. All other things aside, again, it just looks cool. I’m not a vain man but cruising through O’Hare I couldn’t help but feel like a boss, the Sausage King reincarnated and light on his feet, with more style than even that old hookie-player Ferris himself. Actually given the fact I was passing through on the tail-end of WakandaCon, the pack actually brings to mind Black Panther. I am Tchala.

And then you open it. 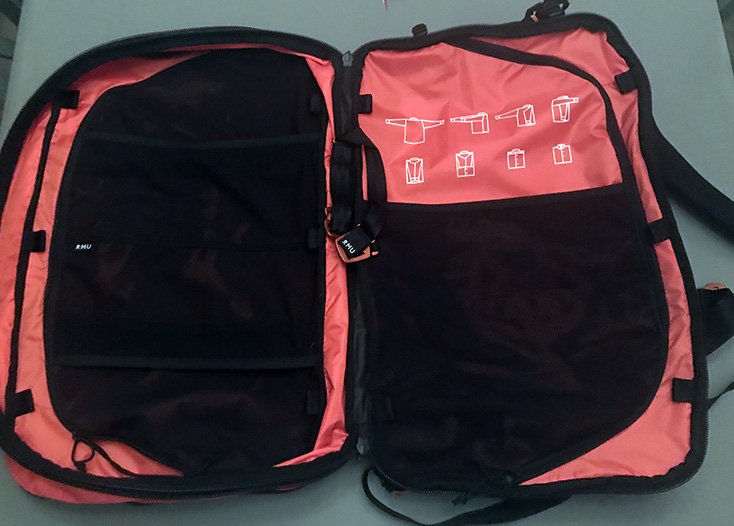 I’ll obsess over gear for hours, maybe even days but when it comes to packing everything else, usually I spend about 20 minutes throwing things into my bag the night before a trip, whether it’s an overnight or a multi-week, multi-nation jaunt. That either leads me to pack too little or too much. For a recent cross-country flight, I left it shrunk in 35L mode because I knew I’d be returning with a ton of stuff. The expansion to 50L was so great for hauling home my lucre but even at 35L it’s pretty much-got room for everything a normal, if not slightly skiddy, human would need for a week or so. It’s got zips on both insides to try and “organize” as the people call it (or to use the left for carrying your ski boots) and a false bottom for smuggling all that cheese and brat from Wisconsin (just kidding, obey all TSA rules, be responsible law-abiding travelers, for dog’s sake). The other side of the interior is what I call the fancy-clothes pocket, including a guide on how to fold your button-down shirts. And there’s even a helmet net because who wants to sacrifice all that interior space for your dome-shield? 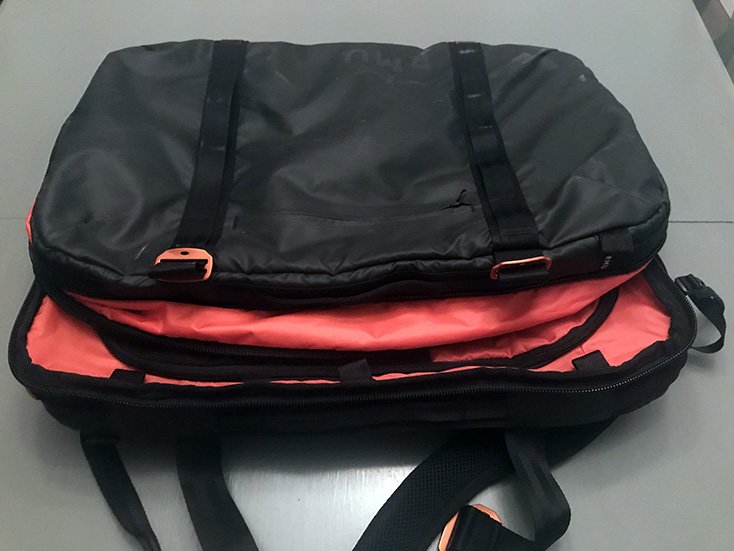 My brother, who’s based out of London, said he was worried about it fitting on euro low-cost carriers like RyanAir (though they might be going under any day now) or EasyJet. But it’d actually just barely make it (eh, maybe not if you got some overzealous bag monitor).  EasyJet’s baggage recommendation (which is less than its actual limit) is 55x40x20 cm (roughly 21 inches and change by 15.5 inches by 7 and one half), which actually happens to be RyanAir’s limit. The RMU BRFCS comes in at 22 by 15 by 5-8 inches so unless somebody at Budget Air is pulling out the ruler and penalizing you for a ¾-inch discrepancy, there’s no issue. And on any legacy carriers, you’re golden — it held more than my wife’s roller but took up less space.

To Roller Bag or Not? 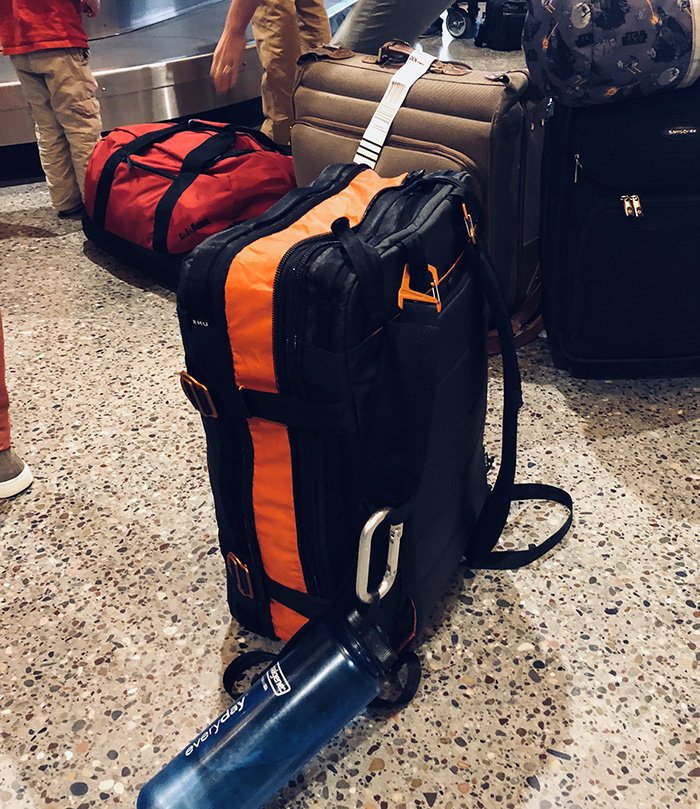 Which brings me to my bias: I hate rollers. You have to turn all awkward to drag it down the airplane aisle. If you’re hurrying up an escalator you gotta grab it by that a handle that’s not really made for carrying anything. Lift it up and down curbs limned by runoff, cram it into tight spots on small urban sidewalks, jam the unforgiving frame into the overhead or smash it into a hotel elevator. You wanna drag some clunky mini-fridge during rush hour at a bus/train travel station? Wheel it over that nasty bathroom tile on your connection? Not for me. Roller checked luggage is one thing. Grab it from baggage claim, out into the shuttle or your vehicle. At the hotel let the porter deal with it. Done. But I just hate roller carry-ons.

Especially since the BRFCS brings the size and durability of a roller (it can even be checked if you’re the last person to board that crowded Jackson to Salt Lake flight) but you can run with it on your back through the streets and up and down the stairs, careen through airports or walk from tube to buddy’s couch. With more and more airlines offering cheap no-checked-bag international flights, your hand luggage is the thing you need to dial the most. And true to name, the RMU BRFCS functions as a briefcase, handle on the long side should you not want to pack it out. You even have the option of lashing it onto the roller handle of your bigger checked luggage (lots of webbing/buckle options on this one).

And it’s got a built-in bottle opener.

“If an ass goes traveling, he’ll not come home a horse.” — Thomas Fuller

It’s a lie that traveling makes you a different person. I know plenty of folks who leave on holiday and when they get back they’re the same clueless jabroney they were when they left. To get the most real experience, you gotta always be ready to just go. This BRFCS is kind of the perfect travel pack for that reason. Prague for business? Impeccable design, professional look, keep everything orderly, very aerodynamic, stylish but not super hipster, strong and sleek. Sayulita to surf? It’ll keep your one nice outfit straight while fitting all your trunks and t-shirts and wax and even hug your back while you’re hopping over gutters and platooning over sand (and, yes, it’s got a built-in bottle opener) under that afternoon drizzle. You really could fit enough clothes to backpack through Southeast Asia in it (and with the waist strap, you’d be in good shape for the long hikes). It also looks nice at your mother-in-law’s new shore house, too.

No, there’s really no travel bag I’ve ever had that I like even close to as much as Rocky Mountain Underground’s BRFCS ($199) (and I guess I should add that RMU makes a lot of other really solid products, skis, smaller packs so they know sturdy steezy engineering). It’s got me already vibrating for my next voyage. This gear-collecting solution for the adventure traveler who likes to keep it classy is basically the American Express of luggage. Don’t leave home without it.