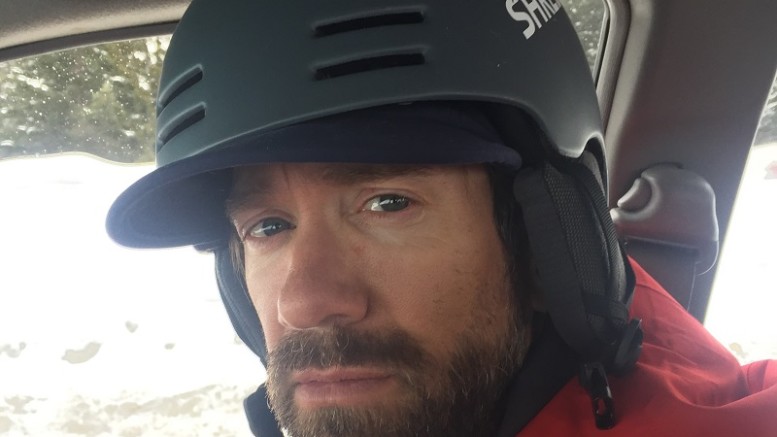 The SHRED Slam Cap is comfortable, the colorways are acceptable, and the chin-strap is easy to engage or pop with a gloved hand. The straightforward, brimless design doesn’t incorporate bells, whistles or extraneous features, and the shell feels like it could take a real beating. The earflaps kept my ears warm, and the fit isn’t so insanely tight that you can’t wear a thin beanie or low-pro cap underneath.

SHRED Slam Cap Why Ear It?

I’ve dragged my feet climbing aboard the helmet-wearing train.

It’s no secret, the train left ages ago, guiding staff and lodge employees alike having eagerly leapt on the bandwagon, or grudgingly been forced on to comply with WorkSafe regulations; If you’re earning your living in the mountains and incur a head injury without wearing a helmet, you may not be provincially insured.

I was most recently called out in front of a group of guests, “Why doesn’t Tyler have to wear a helmet,” and, having no defensible answer, have since bowed to the pressure.

Thus, the quest for appropriate snowboard helmets has begun.

Where gear is concerned, I don’t ordinarily fuss too too much about things like jacket or pants color, goggle band-width and other aesthetic considerations. If it works, sweet, while the looks come very much secondary.

Not only is comfort a mega consideration, but how you look is kind of… front and center.

But. This is a chunky helmet.

My first day out, I made no mention that I’d added a helmet to my kit. On donning the Slam Cap, I casually smooshed it over my dome and my friend Audray instantly chimed in with, “You look like a beginner.”

For someone who has been riding 28 years, this is not a compliment. It’s not like when you shave your beard and someone says, “Wow, you look ten years younger.” No, being likened to looking the same as a late blooming shredder or six year old kind of means you look… how to put this politely… foolish.

Permit me to explain.

The Slam Cap rides relatively high on the temples, consequently, my already Q-tip like body type is accentuated that much further; I am an unrepentant ectomorph, period, full-stop. Creatine, protein powder and efforts to size up have never helped, I just get more wiry, not bigger.

The Slam Cap would be better suited to a Venice Beach bodybuilder whose overdeveloped musculature and frame might better camouflage or offset the girth of said helmet.

As opposed to a sleek, low profile design, the Slam Cap could be best described as a bulbous plastic orb whose design aesthetics were inspired by a crane mounted wrecking ball.

Looks aside, the Slam Cap is rugged enough to take a beating a la Operation Grizzly. As someone who has had a handful (or cranium full) of concussions, I feel better knowing my brain is enveloped in a bunker as opposed to a tent shell. While the addition of dimples would make it feel that much more golfball-like, I could easily overlook the “Spaceballs!” comment knowing I might fare better in an unplanned, impact filled situation.

Yes, the old excuse of “I only ride pow” is no longer an adequate excuse for not wearing a helmet. Trees, rocks, park features and other riders are all susbstantial hazards, and you only get one brain. If keeping that brain encased in a thick, rigid envelope of hardened plastic is your best defense (and if you have a broader neck and shoulders than me- I am pencil thin!), the SHRED Slam Cap ($149.99) may be your best defense.

Be the first to comment on "SHRED Slam Cap Review"