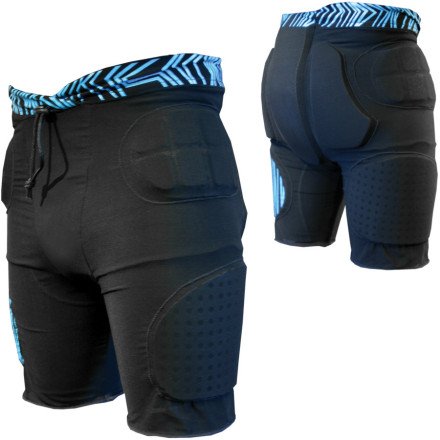 Snowboard Body Armor Protection isn’t awkward or dorky anymore. I know several people who have hurt themselves participating in action sports, and let’s not forget about US Olympic snowboarder Kevin Pearce. So who makes the best snowboard body armor on the market?

The Demon Snow Flex Force Shorts allow for a full range of motions and can be used for skateboarding, mountain biking, or as snowboard body armor and various other sports that involve possible contact with the ground and other hard objects. After a couple runs in the Demon Flex Force shorts you forget they are there, but you know you can push it a little extra with them on. I found a few friends use Demon shin and knee pads when riding in the park. They both told me how the shin pads saved their legs on several occasions.

It takes a little while getting used to wearing the Demon Snow Flex Short. I would suggest putting the shots on for the ride up to the resort the first time. That way you can get used to the feel on the ride up. The crash shorts fit in my snowboard pants and still allow for plenty of flex and mobility.

The pads won’t be in the way when doing tricks, turning or sliding rails. The shorts are made of a Lycra/Spandex with high-density air shield foam, keeping them lightweight, but still adding protection. The Demon Flex Force are low profile and not too bulky, with all the baggy pants kids are wearing these days you probably wouldn’t even know if any of your friends had protection on underneath their ski and snowboard outerwear.

The shorts look like futuristic boxers, black, and grey with some padding in keys areas. They look stylish, but will be under any gear you might be wearing, so the look is not all that important.

The Demon Snow Shorts are lightweight and flexible with padding on the outer thighs, hips, tail bone, and lower back. However there is no protection in the front area, this is one area I think there should be protection. As most snowboarders do not ride with a cup, but nothing is worse than getting racked in the manhood. 15.5 oz

I think the Demon Snow Flex Force Crash Shorts are a great thing when riding park and learning freestyle tricks. They would also good when riding extreme terrain. I don’t wear them when just cruising around the ski area, but when I am riding the park I always have them with me. Knowing that you have a little extra protection, allows you to push yourself to up the next trick or spin that extra rotation.

Remember any protective device won’t make you invincible, but it might ease the impact of a big fall. Having taken several hard crashes over the years, I always interested in finding ways to take the pain out of the landing hard. Demon makes several products designed for protection and I look forward to testing more of their items and giving you feedback on the results. I wish I had worn pads and a snowboard helmet when racing boardercross for all those years, luckily I didn’t hurt myself too bad during any of those races.

Back in 2010 I found myself living in Crested Butte, Colorado during an epic winter season. Had I been wearing G-Form Pro-T Team Compression Shorts  I would have been able to continue riding without any bruising.

Unbeknownst to me at the time were the hundreds of rocks and shark fins lurking underneath the snow’s surface. I popped an air, didn’t commit to my landing and decided I would sit down on my butt. Well, that proved to be a horrible mistake as my thigh and a rock met head-on resulting in a huge hematoma the size of a grapefruit on my left side.

Since then I have been using G-Form on a daily basis for all my action sports fun.

What I love most about wearing G-Form Pro-T Team Compression Shorts is you literally forget there on, even with long johns underneath the short. G-Form’s protective gear is extremely lightweight, soft and flexible BEFORE impact. Once a crash takes place, molecules inside the crash pads harden which stiffens the G-Form Compression Shorts distributing energy from the fall across the circumference of the pad.

Pros: Made and manufactured in the USA, kudos!!
Cons: Would be nice to see more thigh coverage and butt protection. However, those are available in the ski/snowboard specific PRO-G Board & Ski Compression Shorts

Overall anyone participating in action sports where crashed on dirt, snow or pavement are prevalent should be wearing some form of protective gear. Everyone knows about the benefits of helmets, but what about protecting the rest of your body. G-Form is setting an industry trend by allowing athletes to push their limits harder, further and faster. Protect your tailbone, thighs, and hips this year with the amazing G-Form Pro-T Team Compression Shorts.

Have you ever wanted to learn that new trick in the Terrain Park or on the BMX Track, but were afraid you were going to break yourself off? Thanks to G-Form you can now practice flipping and twisting without worrying about getting hurt.

The Cool thing about G-Form products is they are soft and do not restrict movement or motion. They are designed to fit easily under clothing.

Perfect for learning new tricks on the snowboard, bike, skis, skateboard or great if you want a little extra protection. The best part is they harden on impact, cushioning the blow to the athlete.

I wish I had these when I was growing up. Because of the sleek fit, people won’t even notice that you are wearing protective pads you’ll probably even forget yourself.