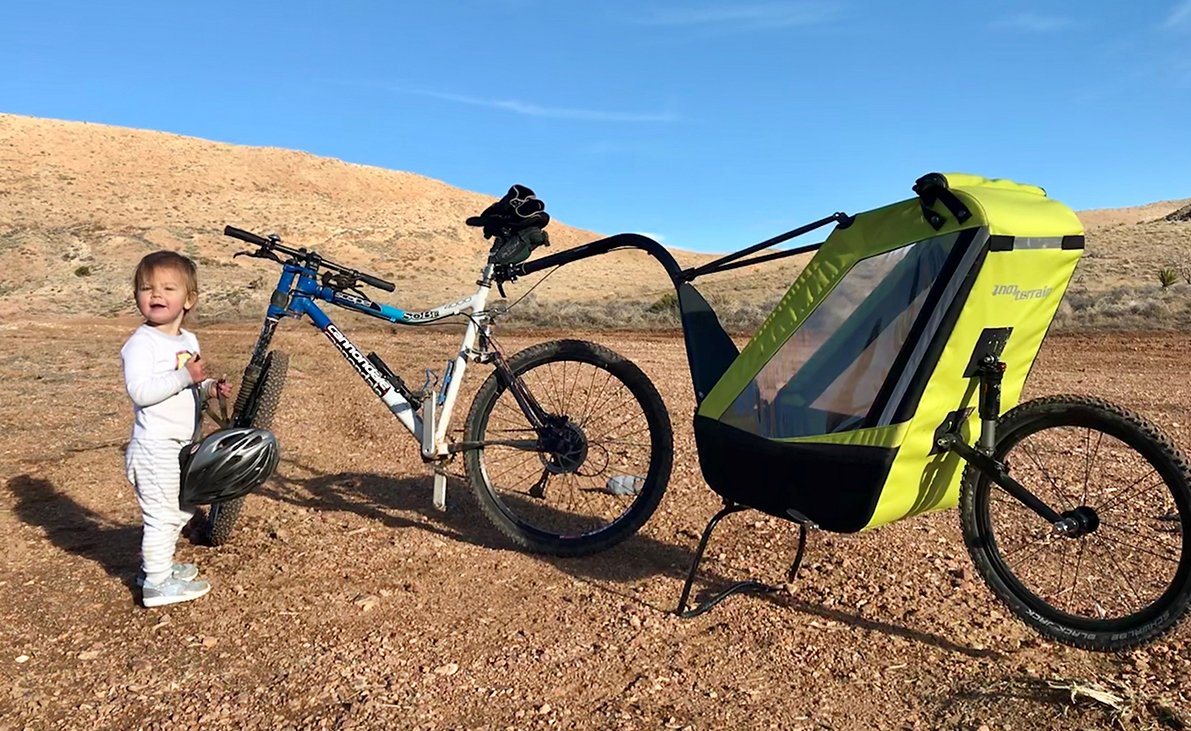 The Tout Terrain Singletrailer is a single wheel alloy bike trailer that excels at towing one child on varied terrain. But what truly sets the Tout Terrain apart is its ability to handle technical single track. Yes, you read that correctly. The Tout Terrain deals with single track mountain bike trails with a surgeon’s brutal efficiency, absorbing bumps with its Fox shock and keeping the flow going for both you and your little one on both ascents and descents.

I’ve logged hundreds of miles biking together with my two-year-old daughter on the Tout Terrain Trailer over the past several months.  From long road rides with over 2,000 vertical, to technical single track mountain bike trails in Southern Utah and Nevada as well as on snow-covered trails…the Tout Terrain Singletrailer handles it all. 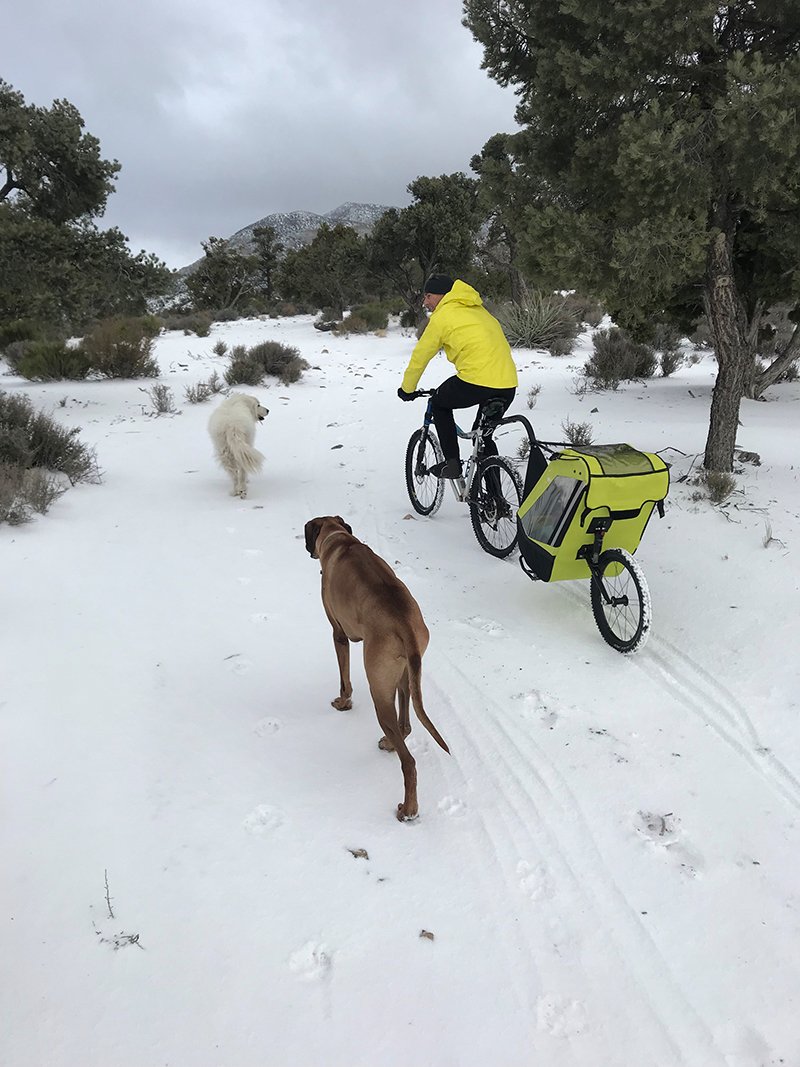 The Tout Terrain is well built and strong yet light. It folds up nicely to fit in the trunk of most any car. It comes with a canvas and plastic cover that rolls up to snap out of the way when not needed. This is the case as well with the screen/bug net. The holes are not small enough to keep out mosquitos or dust but it offers shade and keeps small stones off your child. The cover offers great wind protection, which when riding in colder weather is very important. On one ride I started the descent without rolling down the wind protector. After a few minutes in the winter shade, it became frigid. I stopped, dropped the kickstand, which holds up the trailer and bike both and went back to warm my daughter’s hands and roll the cover for the remainder of the descent. We were both grateful.

Aligning the bike and trailer takes a little practice to get right. Because of the joints which allow the Tout Terrain to move freely both sideways and up and down, which allows the trailer to track so well, it is important to line up the bike with the trailer very straight to keep your little one and the trailer from leaning. I think the only way to do this is to eyeball it. I did a few early rides without realizing how tight the quick release needed to be, leading to a bit of a lean in the trailer, which made for some good naps with Iris’ head resting on the side of the trailer. 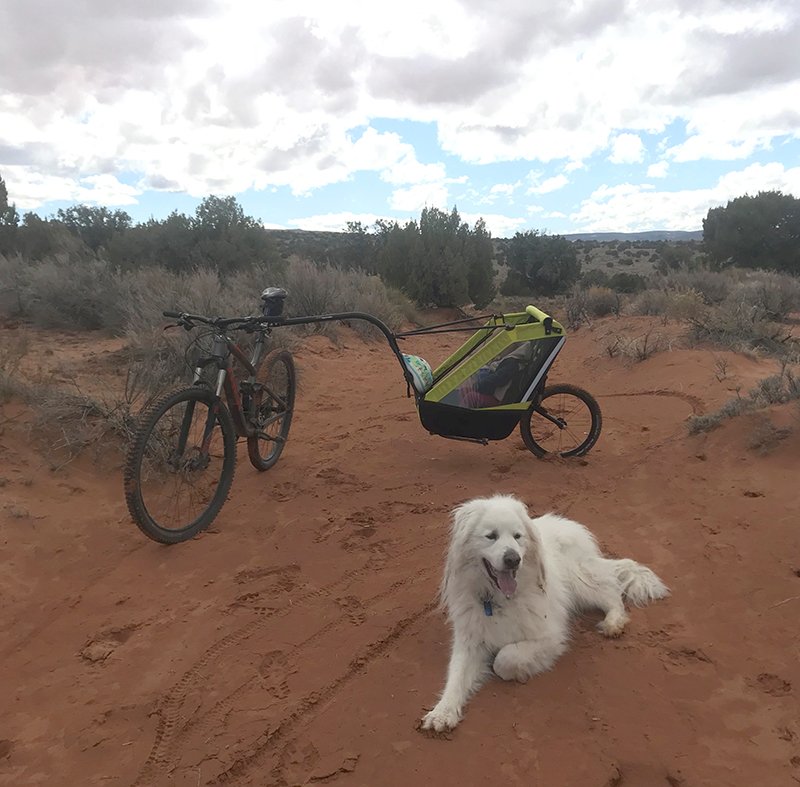 The Tout Terrain Singletrailer offers a smooth ride over rocky terrain. I was totally blown away when I realized that I could take my daughter on really technical single track rides, with up to 1’ rock and log drops. I was a bit nervous about the impact on Iris but soon realized from the squeals of delight after each drop that the bigger the drop the more she liked it. The kickstand acts as a protector for the frame of the trailer from rocks. It is showing signs of wear but is holding up. I’ve had to use pliers to bend the latch that holds the kickstand up after rocks have bent it over several times. But it is still functioning fine.

The shoulder straps kept falling off of my daughter’s shoulders. The way I corrected this was by crossing the shoulder straps in the back, which took care of that problem. Another way to resolve this would be to add a simple sternum strap, like those found on many backpacks. The pin that secures the trailer to the bike could easily get lost. I’d recommend carrying a second pin with split ring in case one gets dropped and lost, which could happen if not careful.

There is enough storage under the seat for a couple of light jackets, bike pump, and a water bottle.

To be able to bike with my child was game-changing. It allowed me to exercise and spend time with my daughter while allowing Mom to do her thing. A win for all. 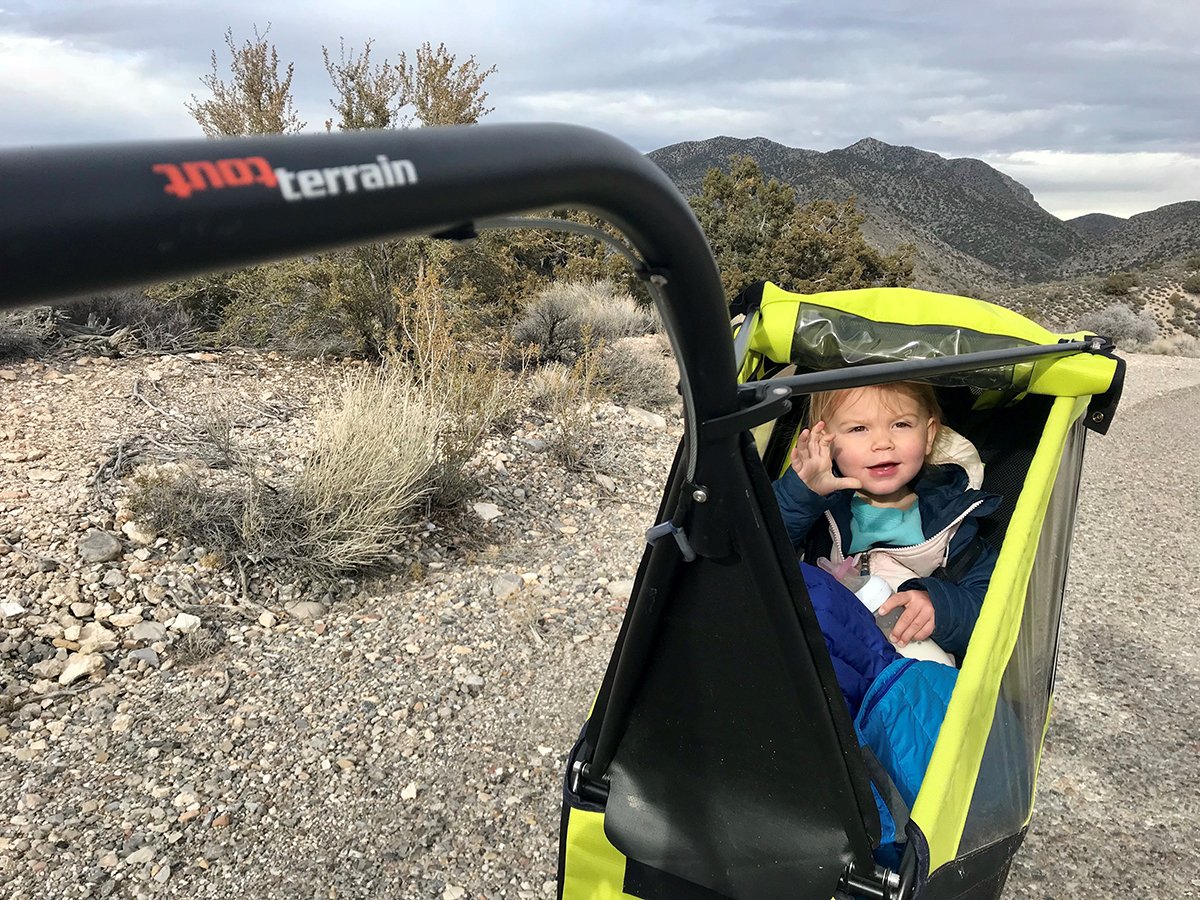 The Tout Terrain is for those who love single track and want to ride with their child. It excels at this like nothing else that I’ve seen on the market. The price is steep at $1,700 USD, but if mountain biking is your jam, and you have a little one and are physically able to take them along, it is a thing of beauty to be out on the trails with your child.