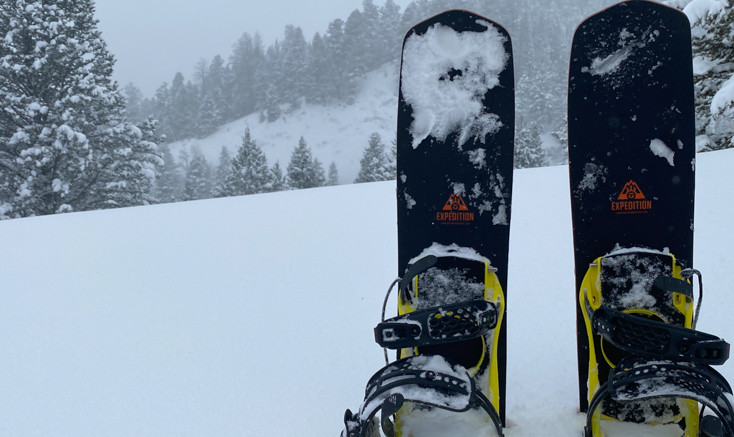 The Union Rover System works with the Union Explorer Splitboard Binding. The connections are the same as with a splitboard. When starting out touring the Rover Binding attaches by putting a pin through a touring bracket on the ski.

And that’s all, you’re ready to go as there’s no skins to fuss. Union designed the skins to be integrated into the skis.

Coming from the splitboard side of thing I really like to get longer slides and allow my splitboard skis to work in my favor. That’s not really a thing that’s possible with the rover as the skins are really tacky.  The grip is great for going uphill but becomes a tradeoff for skating across the flats.

I found the Rover Skis to be more like snowshoes. Which is fine but that was how we access the backcountry 20 years ago.  Toss on the weight of the snowboard on my back and I was exhausted very quickly. I kept having flash backs to the year 2000.

What’s neat about this system is you can actually bring your traditional resort board along.  Union Pucks are mounted to the top sheet of your snowboard (just like the splitboard ones, minus the hole in the middle) and then the bindings spin onto place when it’s time to ride.

This helps with confidence in the backcountry being on a familiar board.  That being my experience as of late is nowadays splitboards ride as good as any resort boards.

Most likely when you do see snowboarders using this system it will be either be going up the local resort or touring out to build a kicker.  Keep in mind though if you’re really sending jumps in the backcountry, is a splitboard binding the best choice?

This sort of system is going to be best for people wanting to go for walks with their dogs, hunters and possibly someone wanting to get into splitboarding.  But honestly, and sorry Union the system is antiquated at this point.  MTNAproach was the first company to release a similar style approach ski / backpack combo with the idea being that you could bring your regular snowboard with you into the backcountry.

At the same time splitboarding really took off.  One of the main reasons splitboarding works and you can do it for much longer than say snowshowing as the weight is taken off your back and applied to your feet.  I believe the equation goes 10 pounds on the back = 1 pound on the foot. With good form splitboarding you find yourself dragging your feet, sliding across the snow.

The hiccup with the Union Rover Approach Skis is they’re really short in length meaning you have to take twice as many strides as you would with a traditional splitboard. Being shorter they will pickup more snow if walking in untracked deep powder adding additional weight to your feet.

My biggest issue though was trying to attach the approach skis to the backup for the way down.  I tried in the office (couldn’t figure it out) I tried in the backcountry, same results. So I ended up snowboarding down with the skis against my back, the same way I had my snowboard on my back touring in.  This was recipe for disaster, as one fall and the skis would have easily fallen out.

The Union Rover Backpack does have a spot for the skis, and avy gear etc.  However it just really didn’t work the way it was intended.  The backpack is sweet though and I could easily see it being used as a standalone backpack, nice and streamlined with plenty of pockets. 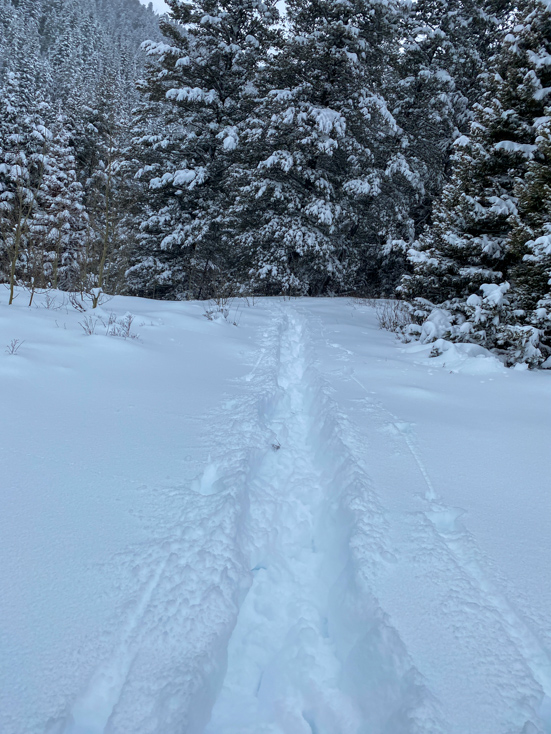 At the end of the day I would say avoid this system if you’re planning on being in really deep snow as taking twice as many steps is twice as much work, plain and simple.  Splitboards will far out perform Drift Skis or Approach Skis like the Union Rover’s

However, If you like to get exercise, want to explore your local hills  and have been eyeing your local ski resorts uphill policies then you may have found a great system with the Union Approach Rover Skis ($399.95).

Hunters, dog walkers and people just wanting to get outside with love this system too. One thing to keepi in mind with this system is you’ll also need to buy a set of Union Explorer Bindings to go along with the Union Rover Approach Skis.