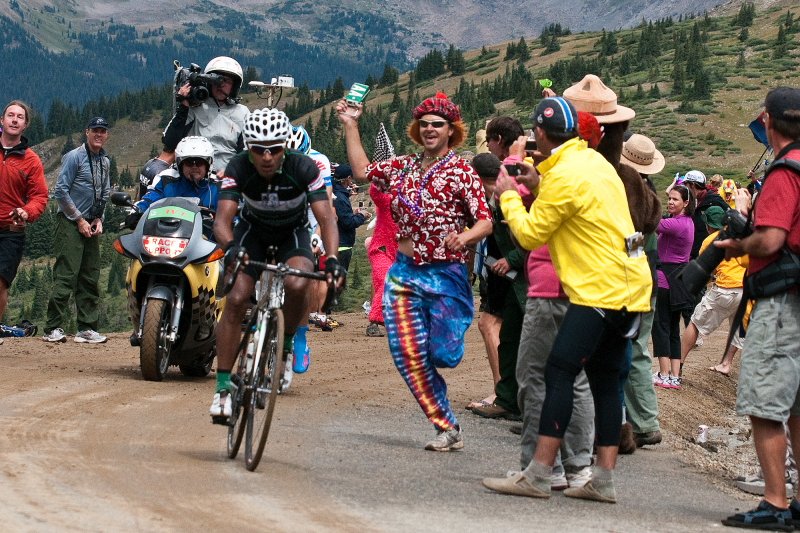 ASPEN, CO – Stage 2 of the USA Pro Challenge was won by 38 year old George Hincapie originally of Queens, New York. Hincapie was able to pull in front of TJ Van Garderen in the final few seconds before the finish line taking stage 2 and his first cycling win since 2009. TJ Van Garderen finished in second, however his combined times from from day 1 and 2 were low enough to earn him the yellow jersey going into the Vail Stage 3 Time Trial.

Athletes battled over two mountain passes with a elevation over 12,000 feet and speeds in excess of 45mph. A major crash occurred early on leaving one rider with a set of broken hands and badly bloodied face. And the Colombian team has taken both King of The Hill jerseys showing power climbing their bikes at high altitudes.

Stage 1 winner and yellow jersey recipient Levi Leipheimer was in the top 4 as he dropped down Independence Pass, however seemed to be coasting instead of peddling costing valuable time as he rolled towards Aspen. The weather came in just as the weather forecast had predicted from meteorologist Joel Gatz and looked to have affected riders as they hit peak speeds and curvy mountain roads.
More USA Pro Challenge photos and coverage.

Van Garderen who’s fiance grew up in Aspen took chances as he came down the wet Independence Pass corners and went on to mention “I have ridden down the pass once or twice” which was evident in his confidence and speed. He would have won the stage but pushed out towards the finish a few seconds early before being passed by Stage 1 winner George Hincapie and followed by American Tom Danielson in third.

In what can be called the toughest stage of the USA Pro Cycling Challenge it makes us proud to see American cyclist take the top 3 spots on the podium. Home town advantage and rowdy fans combined to give the US athletes a little extra boost. If you live in Avon, Vail, Steamboat or Denver we want to see you out supporting this great event..

Be the first to comment on "USA Pro Challenge Queen Stage"