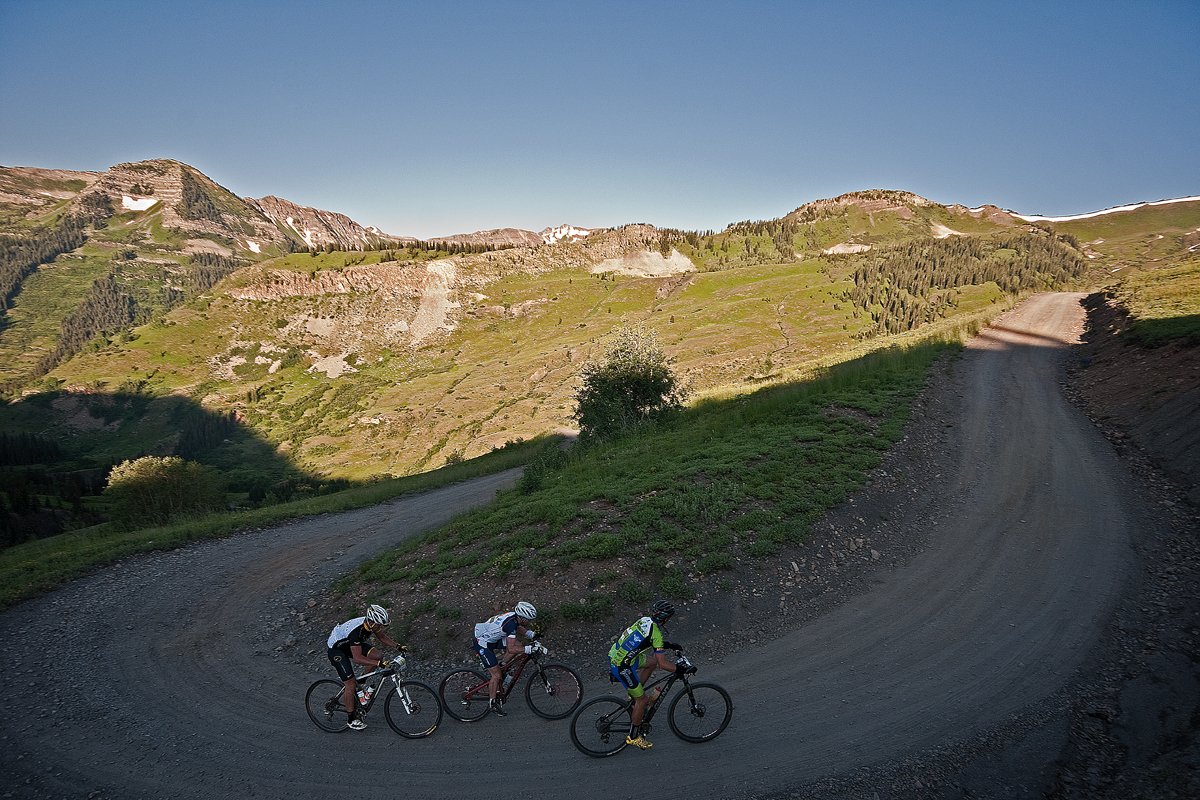 GOTHIC, CO – It always goes to show you that timing is everything. Not soon after I had to give my two weeks at my current job as crew foreman at the Rocky Mountain Biological Laboratory in Gothic, Colorado the Leadville 100 Qualifier Series was coming to town for the first time ever. This meant that most of the best riders in the Rockies were going to be battling for a spot in the Leadville Trail 100 Mountain Bike Race and it dawned on me that I should shoot the event Tour de France style, well, at least form my brother Brian’s KLR 650.

It was also then that I got an out of the blue email from the digital media department of Velo News asking if I had planned on shooting the upcoming event. I did not recognize the scale and caliber of the race at first so I took the assignment lightly. I immediately contacted Dave Ochs to see about credentials and access to the course on a moto. Dave of course complied and much more; he arranged for a ride in the sweep vehicle for a panoramic view of the race cruising down Gothic Road.

Then the bomb hit. At the volunteer meeting it was announced, as well as on Twitter as we later found out, the seven-time Tour de France winner Lance Armstrong had decided to come and race the Alpine Odyssey in Crested Butte. It was game on; the race had elevated to different strata in the universe. We all had to perform at a pro-level in order to survive the hype that would follow. I was scared and excited beyond belief to be following Lance Armstrong around in my backyard mountains on a motorcycle.

The race day went off without a hitch. Lance showed up minutes before the start and the race started after the flurry of cell phone cameras clicking and hooting fans subsided. After a brisk ride down the mountain standing in the sunroof of the CBMR Subaru, I jumped on the KLR while the peloton paraded through town still behind the pace moto, snapped a few shots and chased the race out slate river road. When I hit the back of the pack I also hit the horn; lightly and courteously of course, as the riders yielded to me when I passed on the left, my anxiousness started to subside. I made it through the pack and up to my previously scouted location for the arrival of the leaders.

From the time of the leaders including Cameron Brenneman and Lance Armstrong arriving at the top of the Slate d Huez to Lance winning by 3 seconds over second-place Greg Krause and minutes before local Travis, I was chasing, beeping, and photographing the scene as it unfolded in the Elk Mountains. Needless to say, it was a shoot of a lifetime. 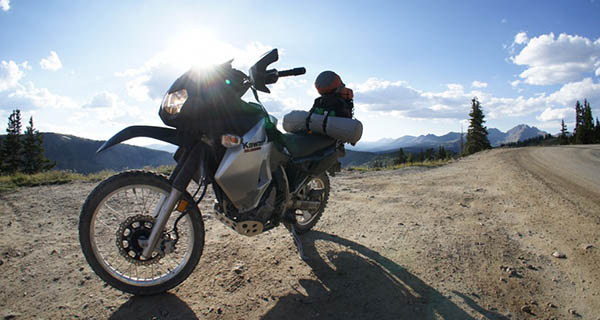 As if timing could repeat itself, on the eve of my last day at RMBL my buddy John Chorlton called to say that his media group that hired me to shoot the Alpine Odyssey was looking for another still photographer for the Leadville Trail 100 MTB Race and that he was looking for a motorcycle to ride in the event. I had to think about it but when I asked my wife and she said, well you gotta go I immediately went into a state of panic and excitement, I was going to ride the KLR to Leadville and then cover the coolest mountain bike race in the country.

I finished my career at the Bio Lab on Friday and packed the bike to head over Cottonwood Pass and then North to Leadville. After cresting the pass at sunset I was greeted to a full moonrise that I didn’t get a picture of because I was still off the back. After some health food at K’s in Buena Vista, I blazed up to Leadville and set up a bivy in the Herbalife 24 Basecamp’s parking lot, our media team’s main sponsor. When a fox tried taking my hat off my head at 4:30 am and the Herbalife 24 house started coming alive I figured it was time to get up. I caught a few shots of the pre-dawn loading of team cars and made my way to the media room. There I was introduced to Brian Patrick of who I was going to be with for the day. I downed my coffee and muffin and we headed to the start.

The whole day was filled with dodging traffic and reading the hieroglyphic map of the course and guessing where the next place to catch the leaders was. After we got warmed up we found ourselves at the Twin Lakes aid station where the real party was. I guess you have to imagine a mix of chaos, costumes and coddling support crews to begin to understand what goes on here. Next stop; Powerline climb.

After 80 miles of racing most normal uber-athletes would pass out or at least hide in the shade instead of climbing the ridiculously steep Powerline in the hot sun. But the racers of the Leadville 100 are past uber-athlete, they are mutant. The grade and ruts on the climb eat ATV’s, MTB’s and ACL’s but the lead riders climb on as if it is a walk up the school steps. I can’t imagine how they must feel for the last 20 miles of the race, a distance I usually do on a normal ride.

At the finish the crowds were thick and the media was in full force. We all welcomed the racers one by one and watched as some barely could get across the line without falling down and others bunny hopped or wheelied on through. The winners, Todd Wells, and Rebecca Rusch, looked beaten down but it is amazing how fast they recover. A splash of water on the face and a giant belt buckle around the neck and you’d never knew they just raced 100 miles across the sky in around seven hours.

I did some work at the media room but was unable to concentrate and too excited to jump back on the KLR and ride home. Whether it is the time it takes to ride 100 miles on a bike or a motorcycle, it is always comforting to have the head space-time continuum to keep it interesting. Timing is everything!!!!