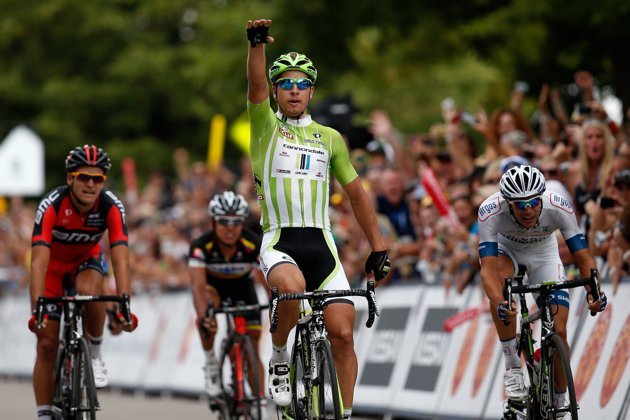 Stage 6 of the 2013 USA Pro Challenge took riders from Loveland to Fort Collins in an exciting day of racing that included the last KOM competition. In a fast and furious sprint to the finish, Peter Sagan took the stage win for the third time this week while Colorado resident Tejay van Garderen held onto the coveted yellow Leader Jersey’s heading into the 7th and final stage in Denver.

Stage 6 of the 2013 USA Pro Challenge took the riders over Cat. 2 Devil’s Gulch with sprints on both sides of the mountain during a 115.2-mile journey from Loveland to Fort Collins. Today’s stage takes place in Denver, as the riders complete eight circuit laps around downtown beginning at 12:55 p.m. MT.

After sprinting across the line to take the win in both Aspen and Steamboat Springs earlier in the week, Peter Sagan (SVK) of Cannondale Pro Cycling added a third USA Pro Challenge stage victory to his belt after crossing the line first to the roar of excited fans in Fort Collins.

The 115.2-mile stage through Northern Colorado included a Category 2 climb and several breakaways, but ultimately it came down to the final moments where Sagan edged out Luka Mezgec (SLO) of Team Argos-Shimano who came in second and Greg Van Avermaet (BEL) of BMC Racing Team in third. Tejay van Garderen (USA) maintained his overall lead and will wear the Smashburger Leader Jersey for the final day of racing today in Denver.

“I’m having an amazing time racing here in Colorado on the roads that I used to train on in high school – it’s unbelievable,” said van Garderen. “The crowds here are incredible. Colorado is a cycling-crazy state.” 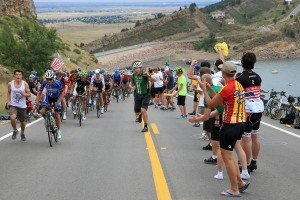 Several attacks came early in the stage, including one from 2013 Tour de France Champion Chris Froome (GBR) of Sky Procycling, but nothing stuck.

After reeling a big group in, the intact peloton reached the second Clif Bar Sprint Line of the day in Loveland, where Christopher Jones (USA) of UnitedHealthcare Pro Cycling Team crossed the line first, followed by Kirk Carlsen (USA) of Bissell Pro Cycling and Marsh Cooper (CAN) of Optum Presented by Kelly Benefit Strategies.

With about eight miles to go, a crash took down Andy Schleck (LUX) of RadioShack Leopard Trek and Tom Zirbel (USA) of Optum Presented by Kelly Benefit Strategies, but they were both able to recover and finish the stage. 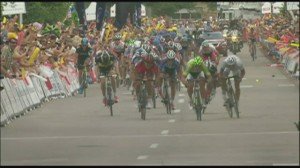 With the end of the stage nearing, the peloton chased down the breakaway and began to set up for a fast, final sprint into Downtown Fort Collins.

Teams started lining up their sprinters and sending them off the front, but in an all-out, intense sprint to the finish, 2013 Tour de France Green Jersey Winner Peter Sagan won the stage.

“Today I’d like to thank all my teammates, they did great work all day, especially in the front for the breakaway,” said Sagan. “All the riders from my team did their best. I’m very happy to have won this stage.”