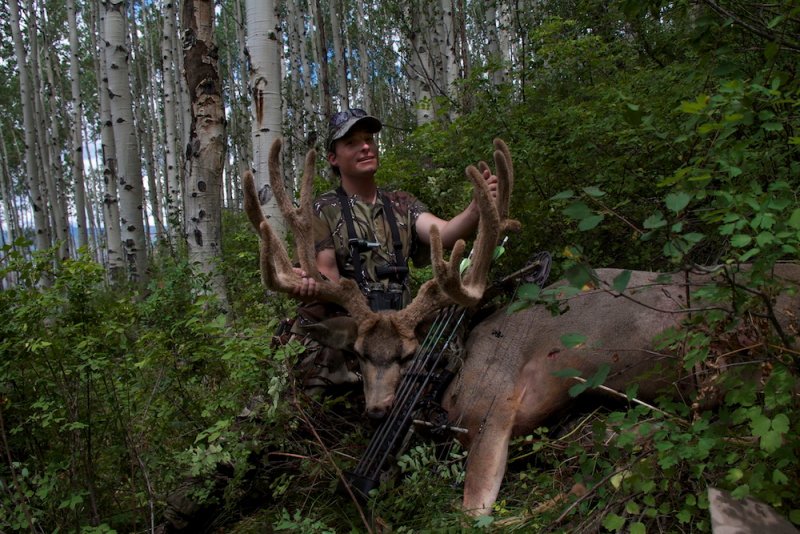 We do most of our hunting in Eagle County, CO, and on this day were in one of our favorite spots. The morning started out great when after a 30 minute walk from the truck we got into the elk just as the sun was rising over the Gore Range. Drew set up to do some calling for me down in the woods, and through his cow calls and stomping around in the forest to make it more appealing and realistic to the bulls, I had a nice 5X5 bull present itself across a meadow at just over 50 yards.

Being the unlucky hunter that I am, the only time this bull stopped his trot across the meadow was right behind a large bush that I couldn’t shoot through. He exited stage right after deciding that Drew was not the herd of cows he thought he had heard, and our hunt continued.

We walked a long ways before Drew’s knee, continually hurting due to numerous ski injuries, forced us to turn back. We split up and took different routes back to the truck, Drew looking for a buck to shoot and me looking for an elk to take down. I had a nice, relaxing walk through the woods, seeing nothing to sling an arrow at. Drew’s luck, however, was better.

As he stepped from the woods into an opening, a buck was eating on a hillside opposite of Drew. So he began to work his way back into the woods where he could get a little closer to the buck, still nonchalantly grazing across the meadow. As Drew worked his way back to the edge of the opening, he found himself standing about 50 yards from the buck, and knew his time had come.

At the same time, I was walking down the ridge above where Drew was and received a phone call from my ecstatic friend telling me I needed to “…get down here real quick”, cause he had arrowed a big one. So I moved down to where he was hanging out, waiting to go look for the buck, which had run away.

Typical hunting protocol says that if your animal runs after being shot, to give it nearly an hour before beginning the search, so as not to push it any further away and make it suffer. So we waited for about 50 minutes before Drew’s A.D.D. was driving in full force, and went up on the hillside where the buck had been to find a blood trail. We found the trail pretty quickly and were able to follow it for several hundred yards through the forest before running out of luck as the trail faded and disappeared into the tall grass.

After an emotional couple of hours searching near and far for the next sign of the deer our friend Rob came riding by on a mountain bike trail that the deer had crossed. We told him what was going on and that we were looking for a buck, a BIG buck, and if he saw anything to give us a call. He rode off and Drew and I were feeling pretty down about not finding the deer when from a long way off down the hill we heard shouting.

“I FOUND YOUR BUCK!!!”, Rob just kept yelling, and we were finally pumped up again, several hours after the initial excitement had begun to wear off. We headed down the trail and found Rob in a meadow pointing to where the buck had run off to. After a couple of minutes, he was on the ground.

Drew and I were so happy after several hours of riding the roller coaster of emotions while looking for a deer that has been shot in the woods. Turns out Drew had arrowed a big one. A possible record as a matter of fact. Our friend Chris Hood did an initial, unofficial measurement of the antlers, coming up with a gross score of 227 inches on this non-typical buck, still in velvet. It will probably end up being one of the largest mule deer bucks ever taken with a bow, in Colorado or the entire world, after an official measurement is taken by the folks at Pope and Young.