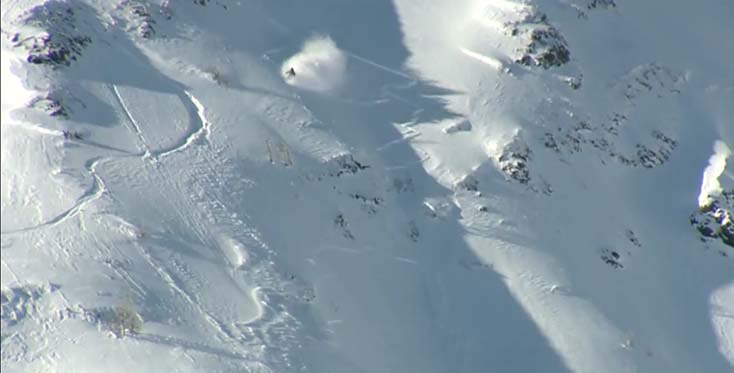 Professional freeskier Hazel Birnbaum from Kirkwood, California was caught in a nasty Freeride World Tour avalanche while competing in  Fieberbrunn, Austria. Leading up to the days event the competition had been canceled due to heavy snowfall and recent winds creating slabs across the entire competition venue. 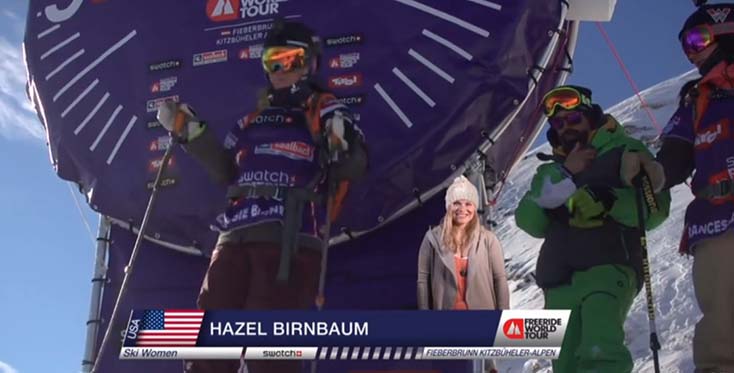 The snow safety team had dropped bombs, and done ski cuts prior to Hazel’s run at the start of the competition. According to one of the announcers, the new snow and stability was only “superficial”? Superficial is an interesting way to describe the snow as the skier prior to Hazel, mountain guide Francesca Pavillard-Cain managed to set off a decent size slide leading her to be cliff-ed out on the first run of the competition.

This in itself should have given organizers a reason to consider canceling the day’s events, however, things went on.

Where this gets interesting, The Freeride World Tour is not making its particularity easy to find Hazel’s avalanche footage? It has since been removed from the FWT website menu.

Her run can be seen by playing the entire event and forwarding to the 29.56 mark. However, footage of UK snowboarder Sascha Hamm’s run who apparently had a big crash has since disappeared?

If young freeskiers are watching these events from home we really ought to consider showing them whats really goes down. 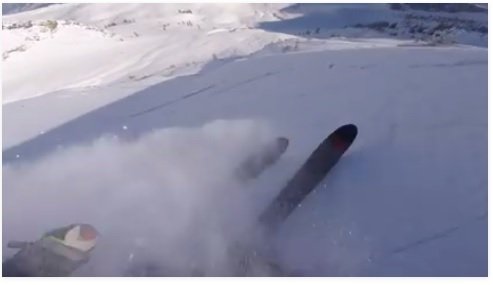 Hopefully, the FWT and Swatch are not trying to sensor these big mountain events after some serious injuries and avalanches as that’s the reality of riding off piste.

I interviewed Hazel for this weeks podcast, listen to what she had to say in Ep.11 Everything Snowboarding and More. “A wise old man told me If your in an avalanche you have done something wrong….” – Hazel Birnbaum Checkout our Hazel Birnbaum Podcast Interview to learn more about this day

Here is what Hazel posted about her run:
“On the day of the event, the Female skiers were to start first, which meant we did not get to see the forerunner’s ski. Turns out, the forerunner had triggered many point releases on the way down, but at the top we were oblivious.

I dropped second, and while skiing the most technical part of my run, I ripped out a pretty large pocket above and behind me. Since I didn’t see the pocket rip, I kept skiing fall line into a shoot, made a left turn left into a wall of snow that I had no idea was there. With my skis gone (lost in debris), I was long-lined out via Helicopter, and at the bottom was told the competition was on hold and they were now going to ski cut the slope…a little too late?

I was also told they would like me to do a rerun as well. At this point, I am pretty shaken up, sore, and without skis. Not an Ideal mindset to go into a competition. I borrowed some skis from a fellow competitor and well, decided to at least go up and ski a pow run. They adjusted my bindings at the start gate. I skied pow down and that was my season.

In hindsight, things could have ended up a lot worse or a lot better … Yes, this sport is inherently dangerous, but it would be great if athletes were predominately set up for success. I guess my final question for myself, is the risk worth the reward in big mountain competition?”

According to one of the announcers, Hazel ran “into the avalanche which is not the best idea?” WTF dude, I’m willing to bet Hazel skiers better than you or I or anyone reading this article for that matter.

So what did the Haze do? She borrowed a pair of skis and excuse my french but she manned up or womened up. Got back to the top of the venue, adjusted a pair of borrowed skis and then ripped a fun powder run staying on her feet through the finish.

The moral of the story is this. Just because a slope has been controlled, it doesn’t always = safety. Especially when you start playing around in helis, snowcats and big mountain competition venues. 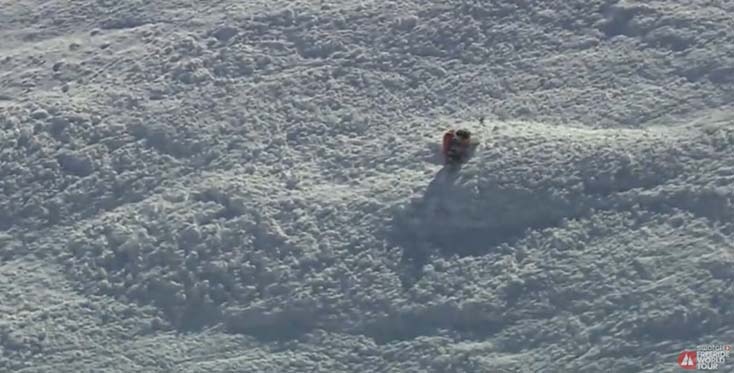 Hazel Birnbaum ok, rocking her BCA Airbag (she did not deploy the bag)

Luckily Hazel didn’t have to pull her airbag, but what is she did. Do you know how to use your airbag in an avalanche?