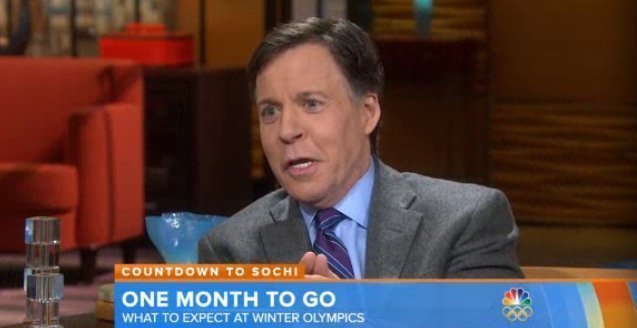 “I think the president of the IOC should be Johnny Knoxville, because basically, this stuff is just ‘Jackass’ stuff that they invented and called Olympic sports.”

This is shaping up to be one of the more controversial statements of 2014, at least in the realm of sports. This was said, of course, by Bob Costas during an interview on the Today Show; he was talking about the addition of slopestyle ski and snowboard as Olympic events this year in Sochi.

If you’re a fan of slopestyle, or action sports in general, it’s probably immediately obvious why this is an offensive statement and why it provoked such a strong reaction from the ski and snowboard community. If you’re not a part of the scene, this tweet from Todd Richards, a member of the first US Olympic snowboard halfpipe team, sums it up nicely: “The sacrifices myself and others have made to progress the sport of snowboarding has just become the product of an MTV show? awesome.”

A number of big-name snowboarders have come to denounce Costas’s comment, emphasizing the fact that slopestyle shouldn’t be equated to the nonsensical, attention-seeking, dangerous stunts of Knoxville’s franchise—it’s a real sport that requires a huge amount of training, talent, and dedication to excel in. (Just check out the video below of this year’s X Games slopestyle medalists.)

Video has been removed

Sal Masekela, best known for being an X Games commentator, is set to be an NBC SportsDesk commentator during the Winter Olympics, making him Costas’s colleague of sorts. He was also put off by the statement. “Whenever I want to be like Bob Costas, he climbs up on his high chair and says something both uninformed and wildly pompous.” Ouch.

Of course, Sal knows all about slopestyle and what it takes to be the best. These guys are hucking themselves off of 50-, 60-, even 80-foot jumps, spinning three or four full rotations, and flipping one, two, even three times. (The triple cork is a really important trick this year—watch out for it in both ski and snowboard slopestyle, and prepare to be amazed.)

I think it’s clear to most people by now that slopestyle isn’t “just jackass stuff.” It’s a serious sport that requires athletes to train for years and put their bodies on the line day in and day out. It’s nothing like launching someone into a lake in a rocket-powered shopping cart or jumping off of your roof holding a huge umbrella. I think we can all at least agree on that.

So why did Mr. Costas say what he did? Maybe he doesn’t see the athleticism and talent needed for slopestyle, even though he’s not talking trash about ski aerials—how many of those guys do you think can do a switch triple cork 1440? Or the balance beam—doing a backflip and landing on the beam is very impressive, but so is doing a 450 and boardsliding a rail.

A lot of people think that Costas and other members of the old guard of sportscasting just don’t get today’s sports—that they’re stuck in the past. That seems to be a likely explanation, especially as he’s built his career on being a sportscaster for baseball, football, and other more “traditional” sports. He certainly didn’t earn any points with this “jackass” business.

Matt Lauer tried to help him save some face by quickly adding “You mean that in the best possible way, though,” after Costas made his “jackass” comment. And, of course, he replied “I mean it in the kindest possible sense, yes.” I know I’m not the only one who wasn’t convinced by this. The response from snowboarders and skiers around the world show that not many people were. It’s hard to pass off something that shows a deep lack of respect for a sport and a lifestyle that many people consider to be at the forefront of winter sports innovation as kind.

Also not convincing was his response to the social media outcry that was televised on the Dan Patrick show, stating that the joke was meant half at his own expense. Again, speaking as a member of the winter action sports community, I can say that I wasn’t convinced. He follows this up with some sage advice, saying “they’ll get over it.” Not going to win any points with that one, either.

So what do we do now? What’s the best action for winter action sports athletes to take here? Take to Twitter and Facebook and rant up a storm? Boycott the Olympics? Show the old guard what “jackass stuff” really looks like?

I think the best thing we can do is to show up at the Olympics and show everyone what we’re made of. Let’s come out in force, both as athletes and as fans, and represent the winter action sports crowd by putting on an amazing show of athleticism and support for our riders. And by respectfully pointing out to Mr. Costas that we’re a real, valid athletic community. And we deserve some respect.

2 Comments on "“This stuff is just jackass stuff.”"