Don’t get me wrong, there’s nothing better than summiting a peak with your best bud’s…..however there is something wrong with how bad the car smells on the way back home. The MTNBABES movement is here to change that. We sat down with the creator to talk about her motivation, the power of the MTNBABES’, and why we need to be seeing many more hair—free bums on top of mountains.

Any mountain town you visit across the world you will find our community plagued by the same epidemic—too many dudes. These aren’t your normal guys—these are guys who are sharing a bed, working night jobs and adventuring with every other precious hour of the day, with no time to do any of the typical sanitary routines of a normal human being. Deep in mountain valleys far enough away from civilization to protect the city-folk from our stench, a tight-knit community (sometimes too much so) of (mostly) dude’s engage in healthy competition pushing their respective sports year after year. Anybody who has spent lots of time in the outdoor community is aware of the overpopulation of dudes, bro’s, muchachos, mountain men, and so on. 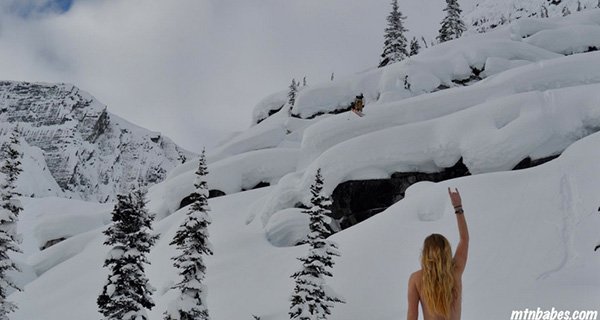 What made you start MtnBabes?
Have you ever stood on a mountain top naked? Most. Liberating. Feeling. Ever.
We believe everyone needs to experience this type of freedom at least once. In an effort to promote women in the outdoors we came up with the MtnBabe concept. We were hoping to create a movement that girls could join and in turn participate in mountain activity. Baring it all on a summit seemed a little bit crazy, but we really wanted something that was different and embraced the true culture of the mountains.

What’s the most important objective of the MtnBabes movement?
To get girls outside. It doesn’t even matter if they follow through with the whole MTNBABE concept. As long as girls get outside to experience the freedom of the mountains and explore the natural world, then the objective of the movement has been met. We just want girls to get outside, be confident, and push their comfort zones. In an effort to get girls off the couch and into the wild we developed the idea to be an inspirational motivator.

What exactly does it take to be a MtnBabe?
First and foremost, to be a true MtnBabe you have to love the mountains. You also have to be a little on the wild side. You have to be willing to take a few risks, knowing that the things in life that scare you are usually the most worth it. But when it really comes down to it a true MtnBabe is one of those people who inspire others to “feel the freedom & be the stoke.”

No guys allowed? Explain yourself.
Besides the fact that no one really enjoys seeing a hairy bum (let’s be honest), there’s a serious lack of female participation in outdoor recreation. We want to increase the number of rad ladies doing things outdoors and getting after in the mountains! There are so many “boys clubs” out there and we wanted a little something for the other side if you catch my drift. 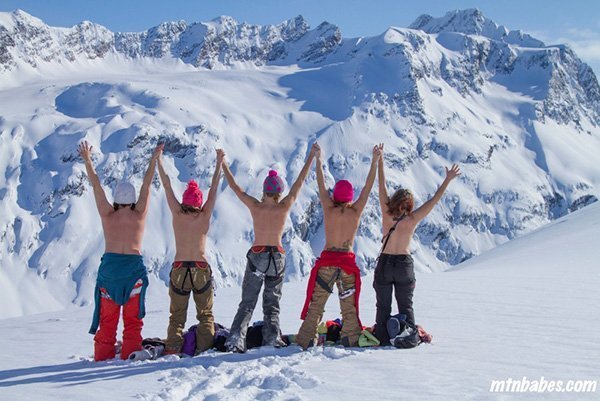 Favorite MtnBabe entry?
Way too many to choose from. Can’t pin-point it down. We’ve had so many amazing submissions all the way from Kilimanjaro in Africa, to the snow-capped peaks in Valdez Alaska, to the backcountry wilderness of British Columbia, to the tops of volcanoes in Thailand, to the drastic landscapes of Iceland…yeah there’s no way there can be a favorite.

Did you beat the new Call Of Duty this summer or did you spend any time outside? Tell us about the Colorado MtnBabe Challenge.
No video games, but I did read A LOT of books while living out of my truck and cruising to the highest peaks in the Colorado Rockies. But when I wasn’t reading, yeah I climbed some mountains…about 58 of them to be exact. For a while, a goal of mine has been to be the first chick to summit all 14,000ft (4200+ meters) peaks in Colorado and get MtnBabed on each and every one of them. Colorado has the most 14ers the lower 48 and I thought it was about time someone bared it all to the fine mountains along the Continental Divide.

I noticed there aren’t any MtnBabe action shots….What are your thoughts?
In terms of MtnBabe action shots, let’s just say last time I tried to capture that moment, I think the guy who gained the ridgeline below me was a bit too surprised to see me enjoying my alpine scramble so “freely.” However, we’re always up for creative submissions as long as the MtnBabe is keepin’ it classy.

There you have it from. From one of the few chicks who will always kick your ass up the skin track, MtnBabe’s is not much more than a simple and fun, yet effective and powerful effort to motivate women to get outside. Let me tell you, ladies, we appreciate it, keep on rockin’ in the free world…