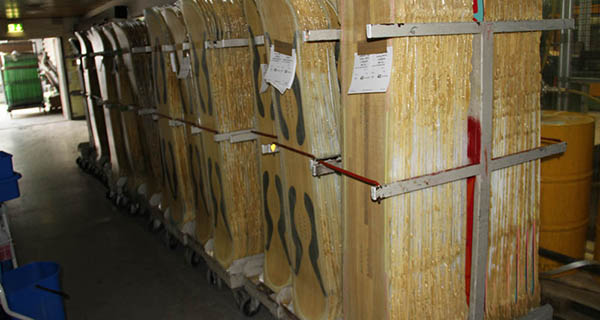 Should North American snowboard brands be manufacturing equipment oversees? Personally I think not, and am happy to announce that the GST (Global Sports Technologies) factory in Austria is closing!

OEM manufacturing agreements – duh it’s called outsourcing 101.. Rumor has it lots of shred brands were having trouble paying on time. Factories in China are now requiring upfront payment before boards are being produced.

Global Sports Technologies CEO Thomas Berger had this to say in response to the Elan Factory closing last year “the market has too many production facilities considering the volume [of sales]. There are brands fighting mainly for volume with cheap pricing, resulting in too many closeouts.

After many years of decreasing prices it is time to bring board prices back to a reasonable level. This is more healthy for everybody.” – yikes, and yet a year later GST is closing their doors after taking on all the Elan customers including DC, Stepchild, Flow, Niche, Drake, Jones, Yes, Rome, and APO.

Jones – Hopefully this will correct production issues that were happening in the past “GST will be finishing Jones entire order of 15/16 line of boards before closing later this summer. Jones is already in the final stages of selecting a new partner/facility to produce the 2017 line and beyond. More deets to come when the decision is made”, according to Dax Klem who does PR for Jones Snowboards.

Niche – Is a Salt Lake City based company making boards in Austria? Anna Van Pelt from Niche mentioned “Luckily for us, we produced our 15/16 stuff really early this year, so all of our 15/16 boards have already been made. So, we’ll be fine and we’ve got a bit of time to figure out where we’re going to go for 2016/17! As far as our plans moving forward, we’re currently exploring all of our options, North America included. “ – this is great news!!

“Inventory and close-out products are industry talking points every year and fulfilling high production quotas doesn’t align with CAPiTA’s strategy of build-to-order. We feel like we can help the overall health of the industry by reducing gross production capabilities and ending this era of the mega-factory.” – Blue Montgomery, Learn more about this cool new facility over at Transworld Business

Yes is making boards in Dubai at SWS as is Arbor… Will Jones follow suit? Jones went Nidecker then GST now what? If the quality is legit coming out of SWS that’s rad, but again why can’t these brands make boards stateside?

Even Gentemstick is outsourcing these days…

Gentem makes ½ of their boards in Japan and the other half in China aka the Snow Surfers (oh the Irony), this was sort of sad to hear. Actually this really sucks to hear.. Even the original custom shapers are finding out that snowboard manufacturing is a business and needs to be run as such, it’s all about the dollar or yen or Euro.. Hmm

And in Similar News
Union will be moving its production facilities from China to Italy! Now that we like!!

5 Comments on "GST Snowboard Manufacturing is Closing, Does it Matter?"