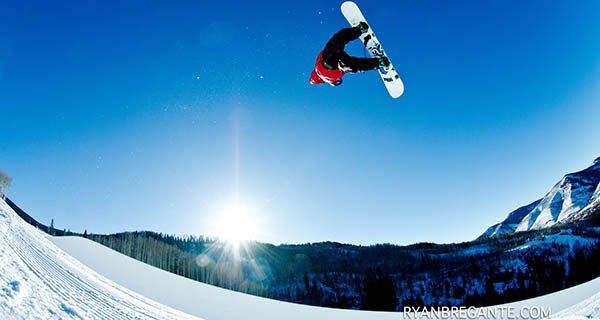 Learning to ride a snowboard halfpipe is not something that a straight up snowboarding beginner should try to take on. The photo above is out good pal Travis Young, a professional snowboarder..

Before you start, you should make sure that you have solid edge control and turning skills. The ability to ride fakie comfortably is also smart.

If you can do these things, then you might be ready to learn to snowboard in a halfpipe. Of course, working with an instructor in person is always the fastest and most effective way to learn a new snowboarding skill, but the tips below can help you learn to ride a halfpipe by yourself.

Learn to ride in a halfpipe in much the same way that you originally learned to ride in general. Traverse back and forth along the bottom of the halfpipe to get used to going up and down the same slope.

Once you are near the top of the wall, it is time to attempt to get some air. Naturally, this step will be a little scary at first. No worries, it is surprisingly similar to going off a regular jump. Start very small, a few inches, and work your way up to more air steadily. Make sure to keep your knees bent slightly while landing and close to your body while you are in the air. Concentrate on the lip of the halfpipe during your landing so that you can prevent your nose from digging into it.

It is not impossible to learn to snowboard in a halfpipe by yourself. The tips above show you the basics of how to do so. Remember to start slowly, watch and learn from others more experienced than you, and make sure it’s your turn for a run, especially when you are first beginning to traverse.

More How To Snowboard Articles:

How to Buy a Snowboard for Beginners

How to Buy Snowboard Boots

How to Buy Snowboard Bindings

How to Snowboard in Powder

How to do Snowboard Grabs

How to Jib on a Snowboard

How to Drop a Cliff on a Snowboard