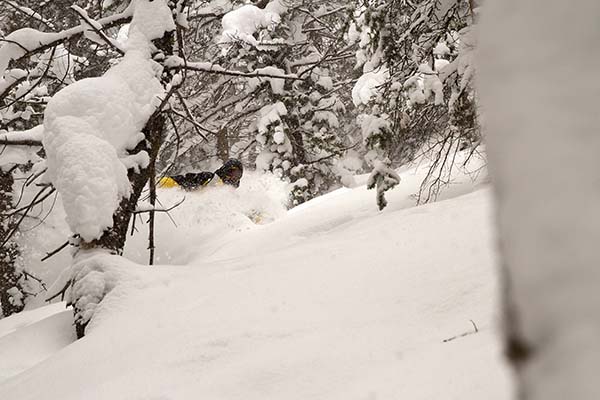 This shot of Weston Snowboards rider Joe Otremba was taken on yet another dark, snowy day in the Northern Sawatch Range of Colorado. We were in some heavy timber with the snow hammering down, getting choked out on nearly every turn. I really like this shot because it was so deep and dark in the forest, and Joe was able to come down the hallway in the pic, barely poking out of the snow cloud for the entirety of the line.

The photo was taken at: f/4.5, 1/800 sec, ISO 200 with my 24-70L at 59mm. The snow on the trees really tells the tale of how deep it was, and the magical feeling of being in dark timber on a crazy deep day is impossible to recreate, so I feel that the attached video, from a little later on in the same run, is the best way to show how it really was!

Until next time, skip sleep, get out and get deep!