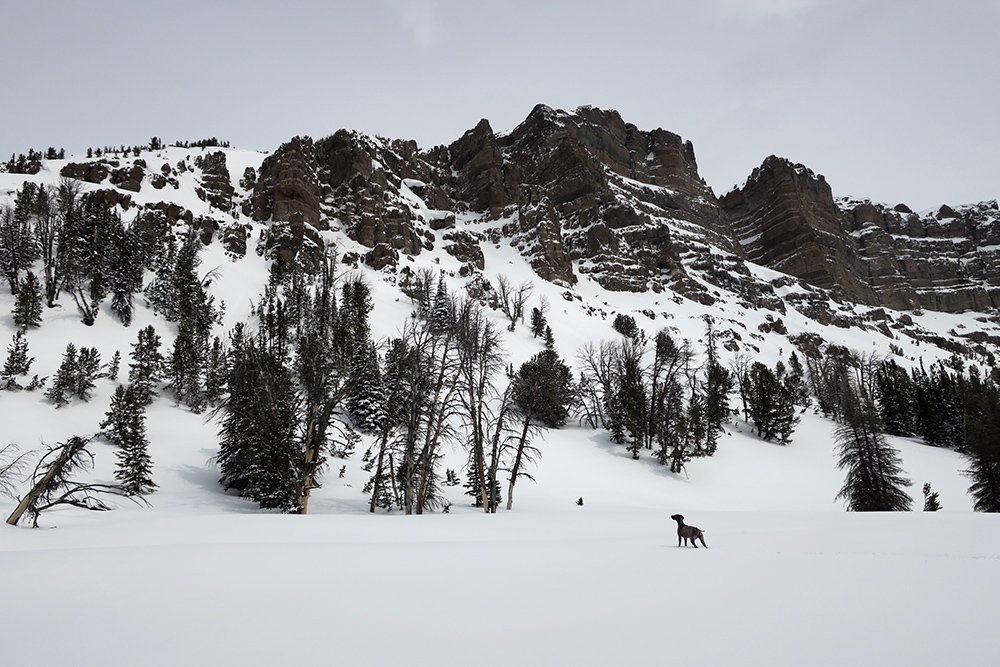 With deep snow, a mostly stable snowpack and plenty of terrain to ride I decided to take my dog out to explore the areas around the Radio Tower Couloir.

We had spent the past few days touring Togwotee Pass and literally had the place to ourselves which is sort of surprising considering the snow quality, stability and weather was practically perfect. Skiers and snowboarders living in the Tetons are most likely already burnt out on snow, or perhaps skiing big lines in the park or maybe they’re off surfing which is fine by me. Aside from a few distant snowmobiles and a handful of cars driving the pass, there was not a single soul to be seen.

My original tour plan for the day had us starting at the top of the pass and touring out past the Radio Tower Couloir to explore the eastern buttress. However, my eyes kept wandering up towards the lines directly in front of me (hence writing a tour plan) as I knew I would be tempted to ski these faces. However due to their aspect and with evidence of roller balls and a temperature forecast of around 32°F I figured the eastern faces would offer better and safer snow.

As I approached Radio Tower Couloir the snow started to feel a little different, a little colder and there weren’t any roller balls around. I thought hmm. Maybe I can tour up 1/4 of the way and make some turns on the lower face below treeline before continuing onto my original destination of the eastern side. 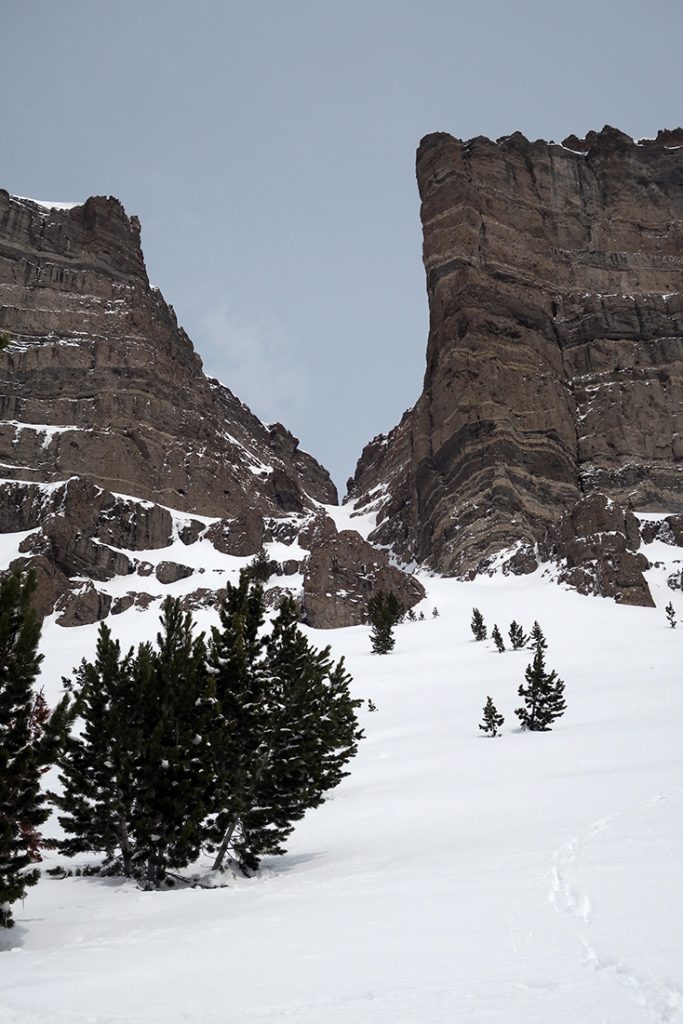 So we started heading up the face towards the Couloir which at first was a pretty mellow skin. 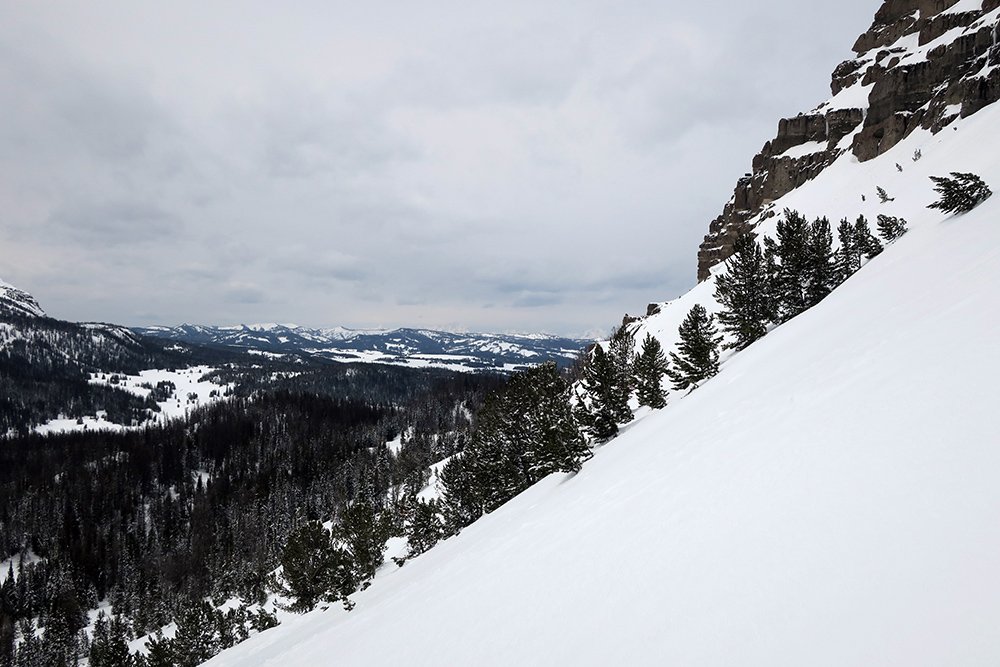 However, once we reached treeline the terrain started getting steeper which offered two options. Either ski back down or take off my splitboard, attach it to my backpack and boot up the remaining face of the couloir.

It’s always weird looking at terrain from the bottom vs the top. This was the view looking up which felt moderate: 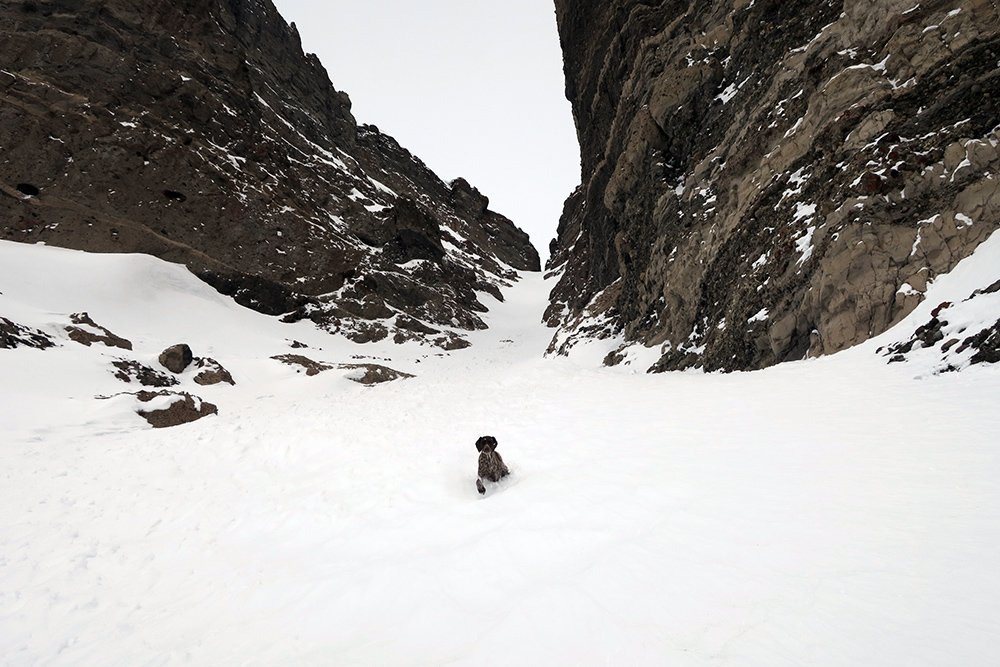 And this was the view looking down which begins to become a bit more technical: 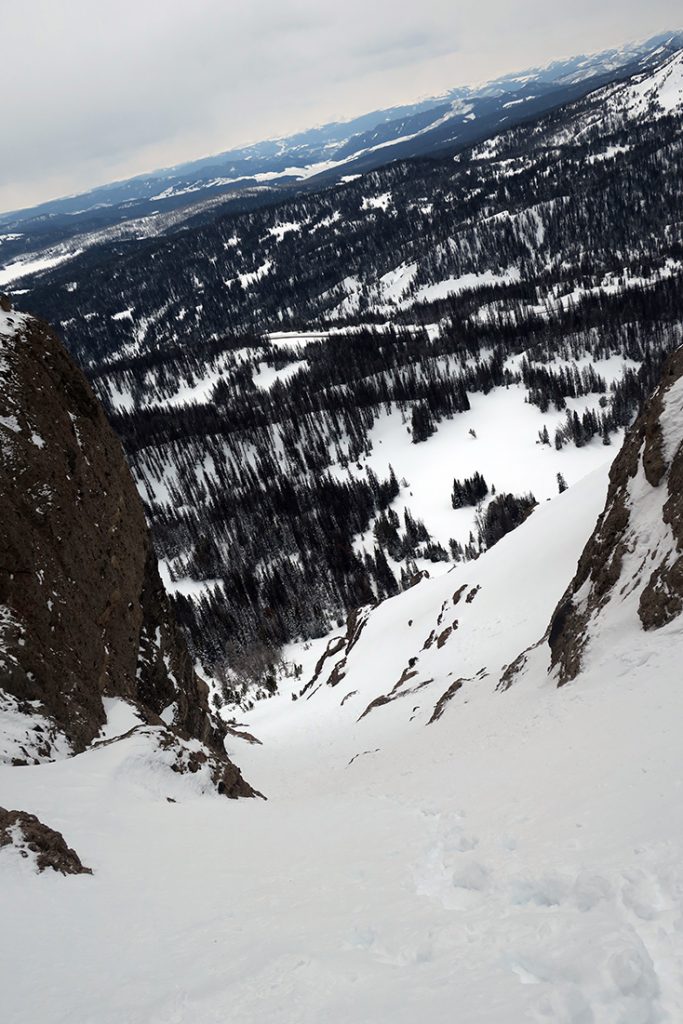 From here up the terrain once again started to steepen and I started looking for a safe place to transition as it would be tough to get my board back into ride mode in this particular part of the couloir. Just above me I could see a “flatter” spot and decided to keep going uphill.

As I neared the flat spot I looked up to my right and noticed I was directly in the line of fire of a considerable piece of ice cornice that had been hidden from my view until I rounded the bend in the couloir. At this point, I decided to move my boot pack to the other side of the couloir which although was much steeper it offered a safer route up. 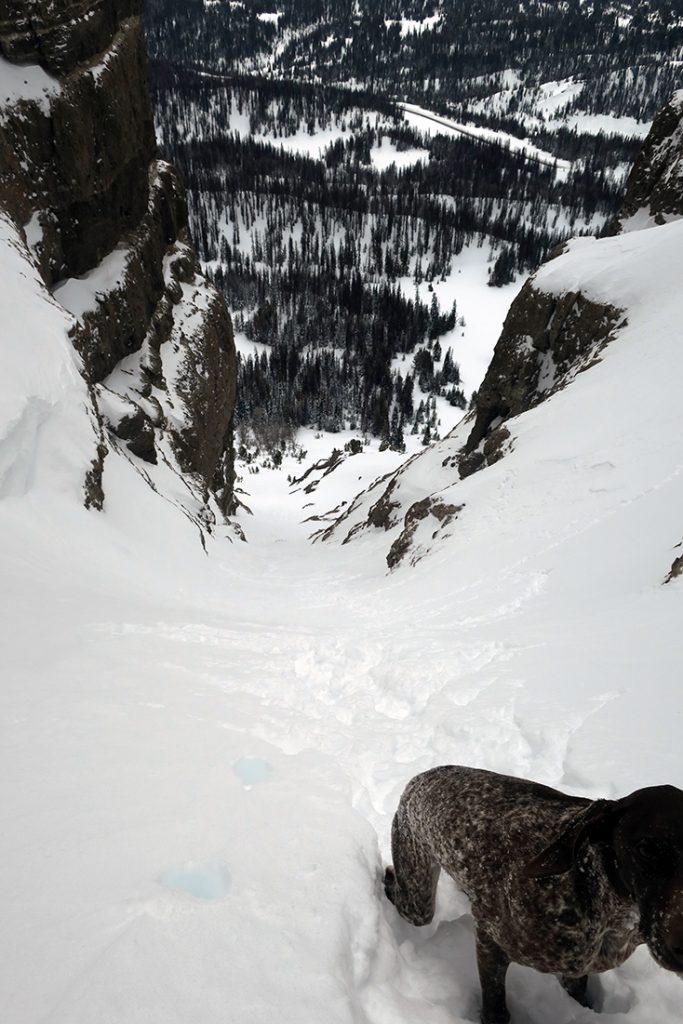 Once we got to the mini bench I realized we were almost to the top. Ok sigh of relief as that last section sort of scared me or more importantly woke me up to the fact I was skiing this line alone with my dog.

The snowpack was stable and telling me to push on as I had dug numerous hand pits along the way testing the snow’s stability while putting in the boot pack and using my ski poles laid out across the snow to help climb and more importantly test for the existence of a slab.

The final 50 feet or so must have taken me about a half-hour to climb. The snow was waist-deep plus and I was doing my best to get up without snowboard boot crampons or an ice ax both of which are tools I don’t currently own. Typically I don’t find myself in this sort of terrain.

As we clawed, literally up and over the top my dog and I cuddled together for a few seconds soaking wet, after being pounded by wind and snow on the final pitch. 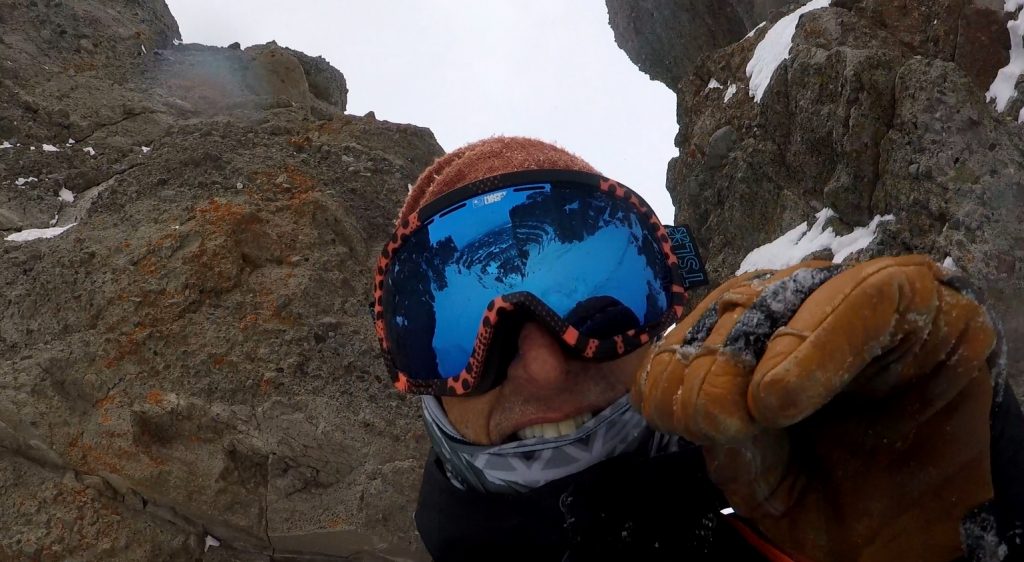 It was brutally cold as the wind ripped through the summit notch around 10,600 feet. Normally I would have taken time to enjoy the view, eat some food but all I wanted to do was get back down. 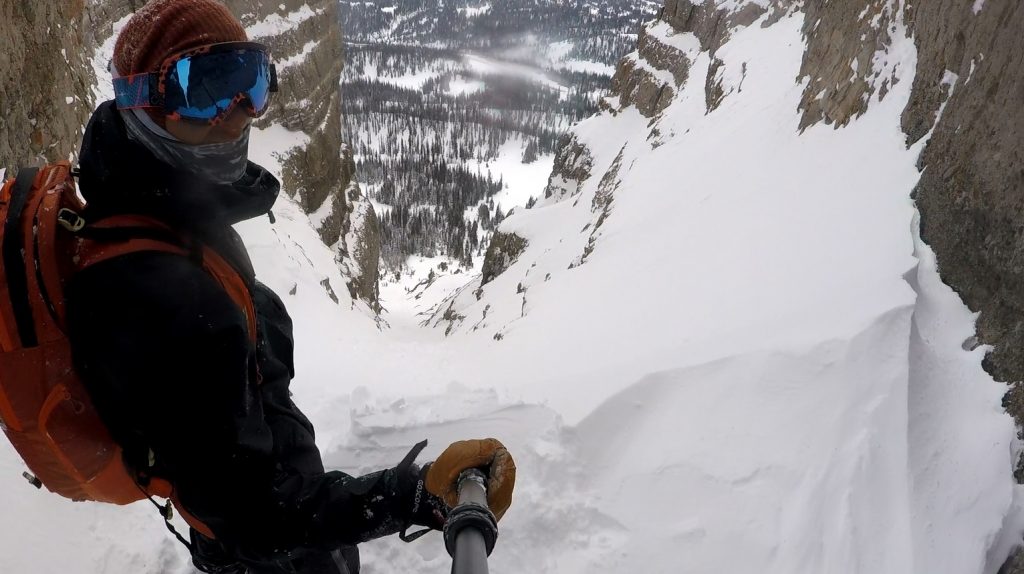 I was actually testing a new splitboard for this year’s Mountain Weekly News Splitboard Test – the Olive Nunchuck. This board has won the award for best splitboard in the past. Be sure to stay tuned to see the video of how the board handled the Radio Tower Couloir. Needless to say, it was a fast ride down. 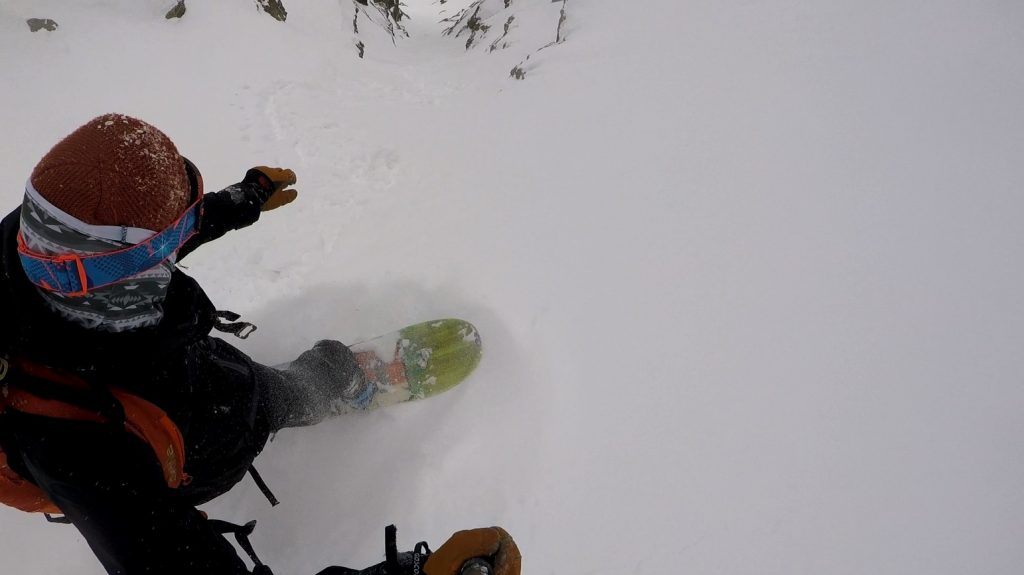 Once back to the car I headed east toward the town of Dubious were I was staying at a place you will be hearing a lot about from me in the future. 16 miles from the pass is home to the tranquil Big Diamond Ranch. 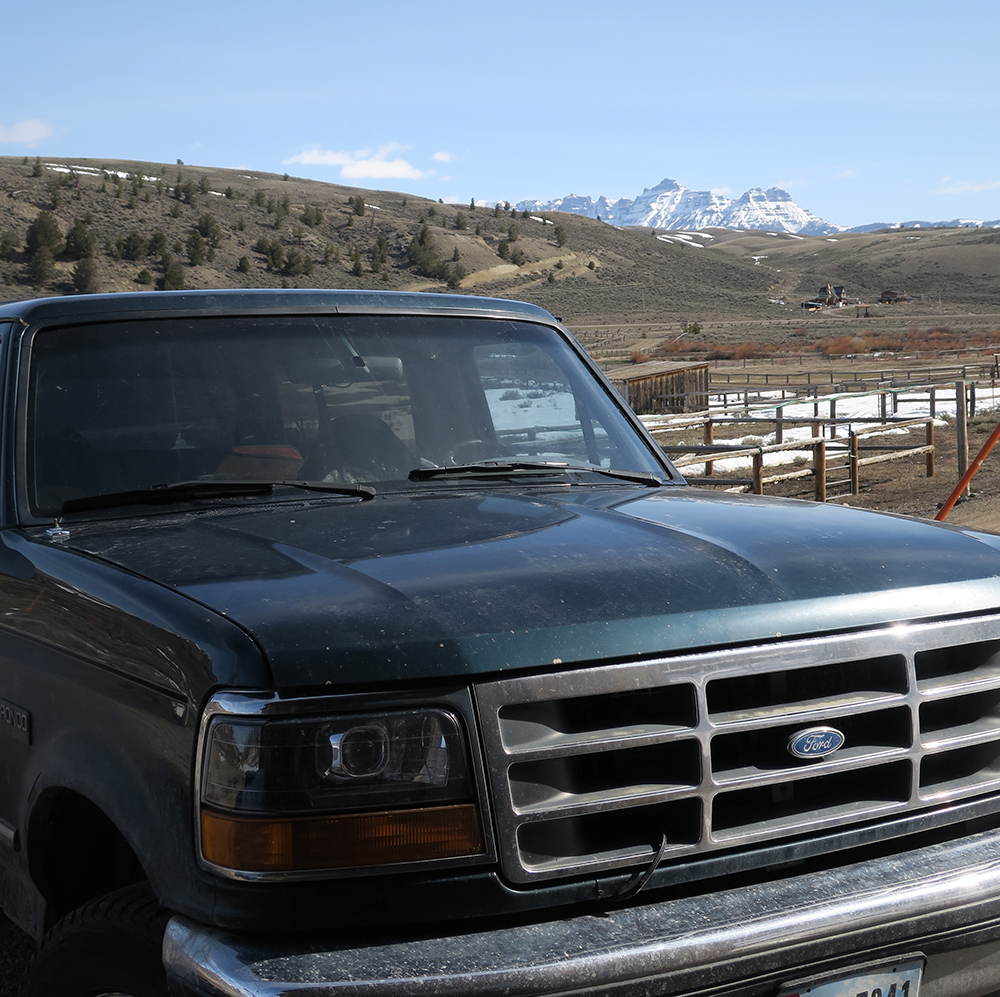 For $299 a night you can call this place home in the winter. 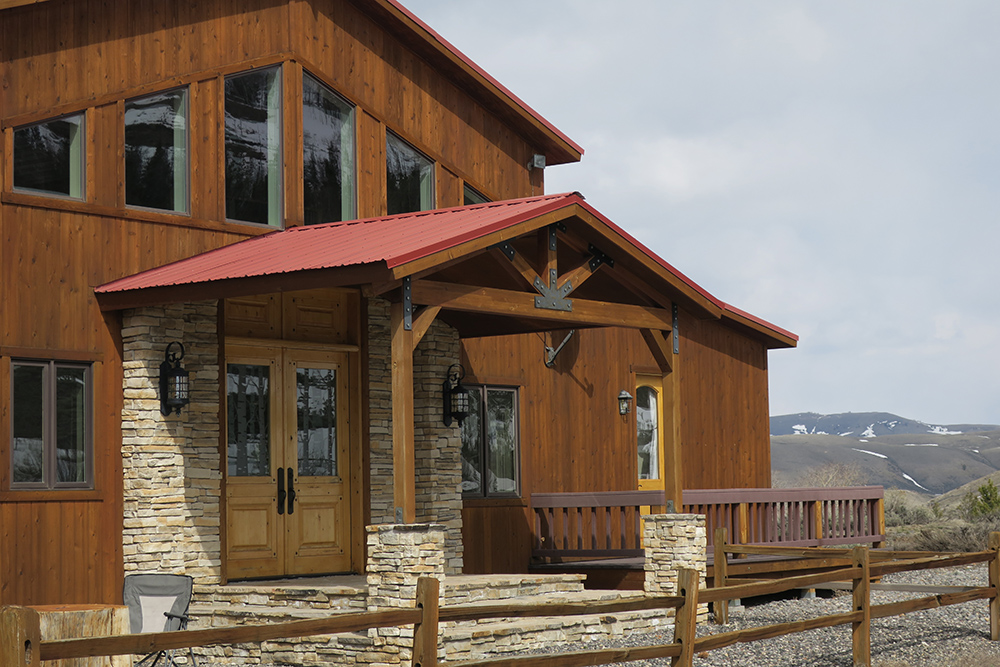 Or for $199 you can stay in one of the luxurious (dog-friendly) cabins. 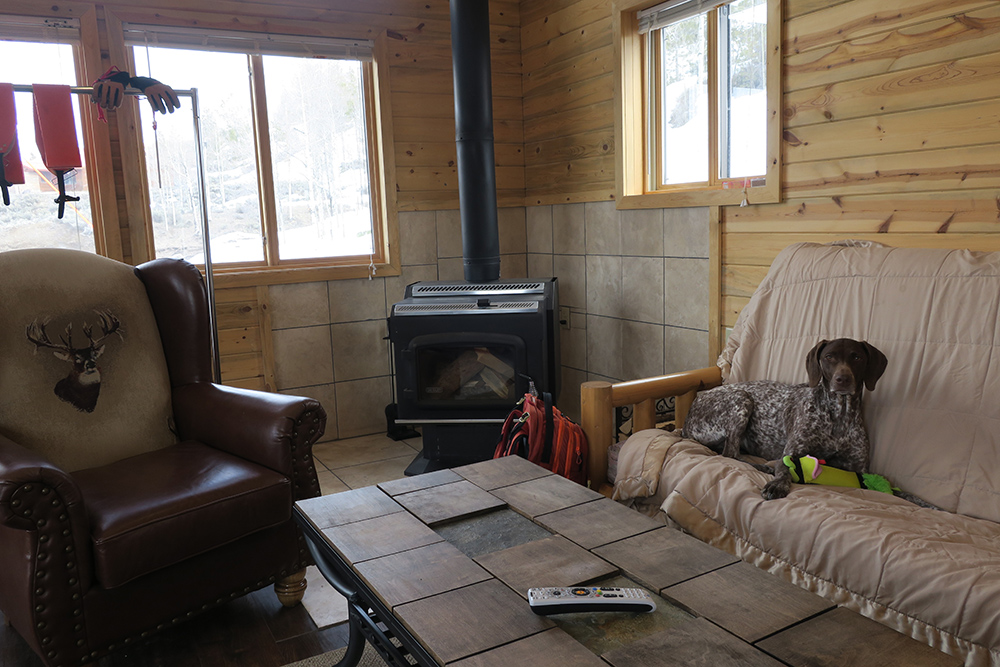