BALI, INDONESIA – Flying to Bali from LAX took a total of 23 hours with stops in Tokyo and Singapore. The travel was long but the payoff was well worth it. Singapore airlines treated us like royalty by allowing us to select our meals in advance, not charging baggage fees and keeping the libations flowing.

Laura and I arrived in Bali on May 2nd and have been absolutely living it up since we landed.

When we got out of the airport in Denpasar, Bali I was a bit taken back by how congested the streets were. Mopeds, cars, and taxis were everywhere zipping around and honking in harmonic chaos. This was the first time we learned to haggle on prices as the cab driver wanted 200,000 Rupi to take us to our hotel. I offered 100,000 or $10 USD and we were off.

Our first 2 nights were spent in the town of Legion just south of Kuta. The area is extremely busy with tourists, more shopping then I have ever seen and lots of traffic. However, after almost 30 hours of traveling, we were happy to have prearranged accommodations. We stayed at Paradise Cottages II which was nice for $45 USD a night. The location was only a few blocks from the beach, which was great. Within minutes we were putting on our swimsuits and heading for a surf. The beach was nice but the locals trying to sell us everything from Henna tattoos, Bintang beers and other trinkets sort of killed the ambiance.

Laura’s Getting Great At Taking Photos

Random Local, Me and Laura

Laura got her first introduction to surfing (with my expert instruction of course) our first day on the beach. A sandy beach break offering mellow waves, the location was perfect for learning. On her first day, Laura was paddling into waves on my shortboard and riding them to shore on her belly. The second day, she rented a soft-top longboard and was able to stand up and ride waves all the way to the beach. A true athlete with great balance, she impressed me by how fast she was learning to surf.

On our second day in Legion, before heading the beach, we decided to do some exploring. One of the most notable stores we wandered into was a sort of jewelry store selling all wares for 2,000 Rupi- the equivalent of $2 USD. Offering amazing hand made jewelry and dream catchers, the store caused my wheels to start turning. I thought about loading up on trinkets for the next concert tour… hippies and anyone with an eye for unique items would surely buy that stuff up in a heartbeat.

Despite the good shopping, the best part about Legion however was hands down the hour and half massage/reflexology sessions we scored for $7 USD. The dollar goes very very far down there!

After two days in Legian, we were pretty much recovered from jet lag and decided it was time to get out of the city and find some bigger waves with fewer people. After reading about some good surf spots on the internet, we picked Bingin Beach which supposedly offered a great surfing community with a chill vibe. We scored a local taxi driver named Adam who has been driving cabs for 20 years. To my amazement, Adam said I was the first surfer he had met from the United States. Most of the people who vacation here are from every country except the US; we suspect the long journey keeps Americans away.

We spent the next 10 hours of our day with Adam for a cost of 350,000 Rupi or $35 USD. Just like all the locals on the island, Adam couldn’t have been nicer and even invited me to come stay with him and his family in his village at G-Land. You better believe I’ll take him up on his offer!

Laura turned 29 the day we left Legion. Adam suggested we head to Nusa Dua for some paragliding and lunch on the beach to celebrate. This was the start of a mega day as we topped it off with a fresh caught seafood dinner in Jimbaran. Jimbaran was once a tiny fishing village but now caters to tourists by setting up tables on the beach where lucky vacationers dine and watch the sunset with their feet in the sand. The night was pretty epic. We were even serenaded by the local musicians- now we were relaxing Bali style! 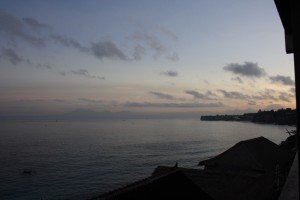 After dinner, we headed back to our hotel. I had found us a place to stay that had million dollar views. The price was right at $25 USD a night but it was sweltering hot as the property was located down a cliff along the beach which meant the trade winds didn’t blow through the property. The views were epic but the living conditions not so much. We had to ask to have the water turned on and our toilet and shower reminded me that we were in a third world country. In fact, to flush the toilet you had to pour a bucket of water down the toilet- fun times… 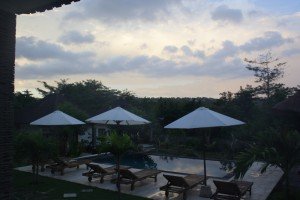 The next morning we packed up our bags and headed to the Bingon Family Bungalows which was much more to our liking. I think we’re going to be here for a while as they offered us a rate of $30 a night if we stay for one week. The rooms are huge, have AC, nice beds, massive bathrooms, and a great shower! Best of all the place is located steps from Bingon Beach and the Impossibles surf spot and is a short drive to Dreamland, Padang Padang and Uluwatu- all of which offer some of the best surf in Bali.

Laura seems to be hooked on surfing and I couldn’t be more stoked. We went down to Padang Padang beach where she rented a longboard for the day and was paddling into waves on her own. As I sat in the lineup I could only smile as I watched her catch wave after wave. Padang Padang has 2 surf sports including baby Padang, where we started, and the world famous Padang Padang left barrel across the way. I noticed one surfer pulling into barrel after barrel, wasting no time paddling over to the ‘real’ wave. Needless to say, my first Padang Padang experience was stellar. I pulled into a bunch of backside barrels that had the cleanest and most consistent shape I had seen in a long time. The wave would peak up and dump over the reef offering insane dry barrels. Definitely not a place to ‘screw the pooch’ as the reef was very shallow, especially as the tide started to drop.

Bingon Beach near where we are staying offered another fun wave that Laura and I were able to surf together with a bunch of visiting tourists. The vibe was mellow, the people were friendly and once again everyone was smiling in the water. There were no paddle battles like you find in southern California or Hawaii, just people looking to have fun in the water- so refreshing to see! 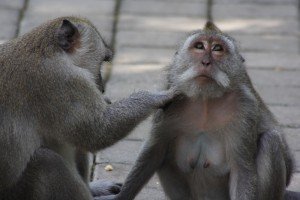 We ended our first week in Bali by visiting the Uluwatu temple and practicing my monkey whisperer skills. There were wild monkeys everywhere and they seemed to really be interested in us, especially when I pulled out some banana slices. Since it was a temple we were wrapped in sarongs which one monkey used as a fast way to climb to my shoulders. I was wondering what on earth was happening and captured a bit of video of the event.

I managed to get a haircut and my beard trimmed for $7 from a local salon, the experience was unreal. The lady that cut my hair barely spoke English and I only know a few words in Indonesian but everything worked out as it always does in Bali. As the average salary in Bali is around $100 a month USD, this lady was stoked on my business.

Our final stop was Uluwatu beach where some locals wanted to have their pictures taken with us. It seems the Indonesians all wish their skin complexion was lighter, which is ironic as everyone in North America wants that bronzed look.

Overall our first week has been incredible. The Indonesians are the nicest people on Earth, always smiling without a single worry. My interactions with the locals here is in stark contrast to my experiences on the Hawaiian islands. In Hawaii, I got beat up more than once for surfing a local’s spot. Here in Bali that would never happen-everyone is always welcoming and psyched on life in general. Overall, the rest of the world could learn a lot from these people and their Hindu practices; Laura and I certainly have.