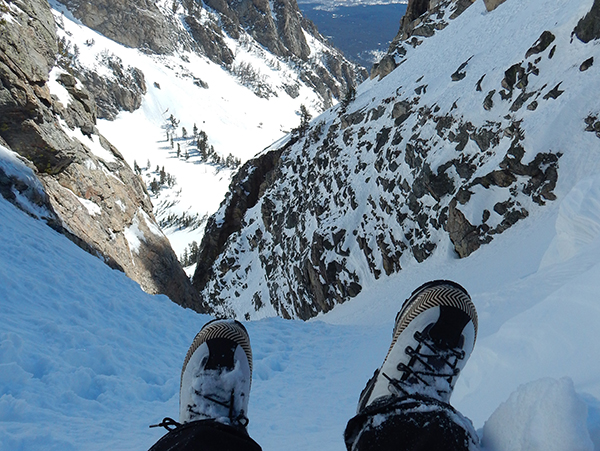 I opened the box and these things looked, and felt like they wanted to stomp on some serious mountains. They felt much lighter than they looked weighing in at 2.1 lbs a boot but still a little heavier than what I am used too. I tried them on and wasn’t sure on what to think. They felt good but man they were super  stiff. They needed to be broken in for sure.

The soles are very well crafted. Whether you use semi-auto crampons or traditional strap-ons it’s a great fit. They also provide great support for a soft boot when you are splitting. These Vibram soles aren’t going to wear out anytime soon. I do notice a lot less feel when hiking and riding and that took a while to get used too. For crampon use, you can’t be it though. Having that stout sole saves the bottom of your feet on those long ascents.

Very durable, great fit with crampons, I like the traditional lacing but the laces are cheap on the Fitwell Backcountry Boots. I broke one the second day and replaced both of them with hockey laces. The booster strap is an awesome feature. After breaking the boots in, they can be as stiff as a board or if you like flex in the upper part like me don’t tie the laces as tight along with the booster strap and it softens the bootup.

A rivet midway up the boot also pulled out when I was tightening the laces which are a major bummer. I just skip that section of lacing now and boot still works fine but shouldn’t happen on a $600 plus boot.

For me, the liner that comes with the boot didn’t feet me too good. The first impression, it looks pretty sweet. I instantly found a pressure point on my lower shin though. I thought it would get better as the boot broke in more but it got worse. The laces and the lace lock on the liner is a letdown. It did not lock the lace, I replaced it with lace and lock. I felt my heel moving around a bit too so I put some adhesive foam butterfly’s on the exterior heal/ankle of the liner and it snugged it up. Still the pressure point though. I used the Fitwell liners for one season and then I tossed them. For the second season, a bought an aftermarket liner from Remind Insoles. I was impressed with these liners. No pressure point, quality laces, lace lock works, very comfy.

The sizing is Mondo style which is a bit tricky. I got a size 285 and they seemed to match up to my size 10 foot. It is really confusing and risky not being able to try them on. I lucked out.

If you want an awesome shell and sole that is going to love crampons, hold up to the most rugged environments, provide support for splitting, and empty your wallet, this is the boot for you. It is a nice option to have in your arsenal for those long alpine climbs and mixed rock. The torsional stiffness when splitting is noticeable but not a game changer for me. If you think they are going to be a perfect boot right out of the box I didn’t get that in my experience with them.

I talked to others that ride the Fitwell Backcountry Boot ($639.95), the concept is there and I do believe they are the best snowboard mountaineering boot but still have room to improve.

One other thing, customer service is weak since they are based in Italy and stuff.