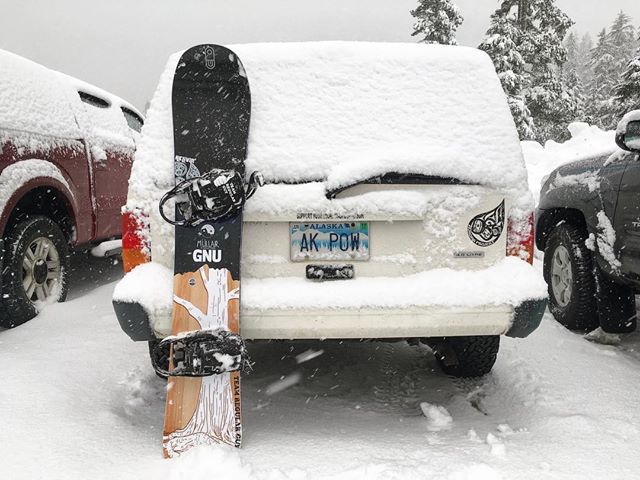 The simplest way to explain the GNU Mullair Snowboard is to let Nico’s riding do the talking. If you’ve been following his career even for just a few years, you’ve got a good idea of his style, and this board is tuned for just that. Nico has been at the top of the natural-terrain world for longer than a lot of riders have been on snow…. dig around in the Absinthe Films’ archives, and you will witness his evolution.

The GNU Mullair Snowboard is a freestyle-based mountain/freeride/powder board, catered to the general intermediate/advanced rider who wants to focus on fresh or soft snow, natural lines, and spontaneously attacking whatever appears in front of you – but their reality most likely also includes groomers, slushy spring days, perhaps a bit of park riding, and plain messing around when your girlfriend goes skiing with you.The chassis is familiar – a classic “all-mountain” cambered board, but with an affinity for turning, flowing, and floating. If you grew up riding in the 90s or early 2000s, you’ll likely find yourself at home on this one. What you have is a regular to narrow waist width (wide sizes are available for 2018 models), regular camber, medium sidecut, a strong tail, and a nose that seems to want to stay on top of literally any type of snow, from blower powder to wet Southeast Alaskan “how is this still snow?” snow.

It’s easy to make a directional board that floats with a shorter tail and longer nose but to keep it simple while tweaking the profile and shape for maximum performance/efficiency in all-terrain is not as easy as you might think. If you ask me, Mervin and Nico nailed this one.

In my eyes, this deck is the continuation of the Flight Attendant, but with that typical dose of Mervin magic – to me, that means a slightly beefier, stout feeling, developed in northwest terrain – some of the most highly-regarded terrain in the world – and it likes to hold a steady downhill pace with faster, more open riding – if you so desire.

It’s got a strong medium flex – somewhere around 7/10 on an average scale from any given company – which means it doesn’t force you to give it more input & energy than you want to every time you ride, but it will absolutely retain its backbone when you need it in more critical/high energy situations. I typically ride a plethora of boards each season… part of my enjoyment simply comes from trying different shapes; seeing something different beneath my feet, no matter how much I might love an individual board – but the Mullair is truly the first one in years to hold me close and keep me interested all season long.

In many ways, I feel like I’ve found my spirit animal, or rather, spirit board, and I don’t think I could ever get tired of its nose and tail shape either.

Mervin (Lib Tech & GNU) went all-in with their banana/C2 rocker profiles for a while, but have been back in the camber-dominant game for roughly the last five seasons, namely with their C3 profile, incorporating a slight “banana dip” rocker between the feet, in the middle of an otherwise regular-camber shape. They call this one C3 as well, but the Mullair, in reality, is their TT (Tomahawk Technology) profile, which is essentially straight-up regular camber.

This particular model has a medium arc (not too much, but not too little), as opposed to the GNU Billy Goat, which is very low camber, or the Lib Tech Phoenix, which has a higher camber. It is also one of the only Mervin boards I’ve seen that has early-rise, though they have been working it into a few other boards recently. In the Mullair’s case, that means the nose starts to lift slightly off the snow just an inch or two before the nose contact, and the tail has a very slight early rise right at the very end. This allows the regular-camber profile to have a slightly smoother entry point, meaning enhanced float and flow, and smooth-riding, without feeling like anything but regular camber.

Also to note – the  “freeride geometry” (I bring this up because of the Flight Attendant connection) is based on the idea that the overall board shape is tapered & set back, but because of where the early-rise starts, the edge that is touching groomed snow resembles a more twin-like feeling. This board seems to incorporate the same idea, although I haven’t seen it noted in Mervin’s words. On groomed/packed snow, it has a very familiar “normal” board feeling, but still retains the benefits of a truly directional shape in terms of holding a steady downhill rhythm, flowing through turns, entering/exiting carves, busting through/over chopped up snow, etc. In soft natural snow and powder, the smooth & slight early-rise nose stays afloat without much effort at all (as long as you don’t ride super slow!) and allows you to rip around as you please, without killing your back leg.

The tail is plentiful, though shorter than average, but it’s strong. Its tail-kick happens quickly, meaning they utilize a little more of the length by not starting the rise too early. The overall profile is very locked in, strong, and poppy, with the “camber suspension” us camber riders love, but it is not demanding and floats wonderfully.

For resort riding, which brings a wide range of variable terrain and snow conditions, the flex and shape of the board allow it to handle it all with ease, although a novice may find it to be a bit more work – it wants some input from someone who can ride, but nothing crazy. The tail is “there,” yet quick and maneuverable, as well as supportive through deep, high speed slashes where you rely on its strength, and the nose has never given me the “folding” feeling that some other decks have. I feel confident going forth, regardless of what appears in my path. I can rely on it, and that’s a nice feeling.

If you’re familiar with Mervin, you understand the “meaty” pop their boards tend to have. By that, I mean it’s not a highly-reactive spring that wants to bounce you around, but rather a beefy power-pop that will launch you to the moon, yet keep you quite solid and grounded in the meantime, like a freight train. GNU also writes about “nose butters to the moon,” and man, this is the nose for that. As I said, the slight early rise provides a smooth entry and excellent flow, and the nose kick its self is a relatively straight/flat profile, providing a nice platform to balance on, should you try to mimic Nico, who has arguably the best powder nose-butter on the planet.

Overall, this GNU snowboard is a classic all-mountain directional board that has been enhanced with a bit of modern profiling, and a mild but noticeable dose of set-back and taper (the nose is almost 5” longer than the tail, based on the factory setback, and the taper on the 159+ is 8mm). On groomers and packed snow, it’s a wonderful mountain freestyle board. In fresh snow, it floats like a powder board, with the heart of both a freestyle and freeride deck at the same time. Some might interpret that as a “jack of all trades, master of none,” but if you ask me, this is a master of all, even if you have a quiver. It’s not “all-encompassing” in a bland way, but rather, it does everything you want with a fun vibe to it. Excellent.

I like most boards that I ride, but this one stands out to me, even though it’s not as if it brought some sort of new technology or shaping to the snowboard world – it just got the math right. If you live in an area that gets a true mixed-bag of conditions and you either want one board for everything or a “foundation” board that is the centerpiece of your quiver, this is a truly wonderful choice. Rip it through the park… carve like a Yawgoon… slash spring slush like a surfer… float deep powder lines… shred down a wide-open face in Haines.. take it through your favorite tree lines. The GNU Mullair Snowboard ($599.99) delivers. It’s okay at slow speeds, but it does prefer a rider who will give it some speed and energy.